BOSTON, Mass- LIV Golf has announced the global field of players that will tee off at the inaugural LIV Golf Invitational Series tournament June 9-11 at Centurion Club (London). The 42 players revealed today represent 11 different countries, have a combined eight major titles, include three former world No. 1 ranked players and comprise 26 of the top 150 golfers in the world, as well as leading players from across the worldwide professional Tours.

The tournament received more than 170 applications, highlighting the players’ desire to have additional playing opportunities and excitement about the new format. In addition to global stars of the game, the landmark event will also bring together future stars who boast an NCAA National Championship, U.S. Amateur Championships and professional tour wins among their accomplishments.

The field will compete for $25 million in golf’s most exciting new format with the chance to become the first individual and team champions for LIV Golf. Players confirmed for the LIV Golf Invitational London include: 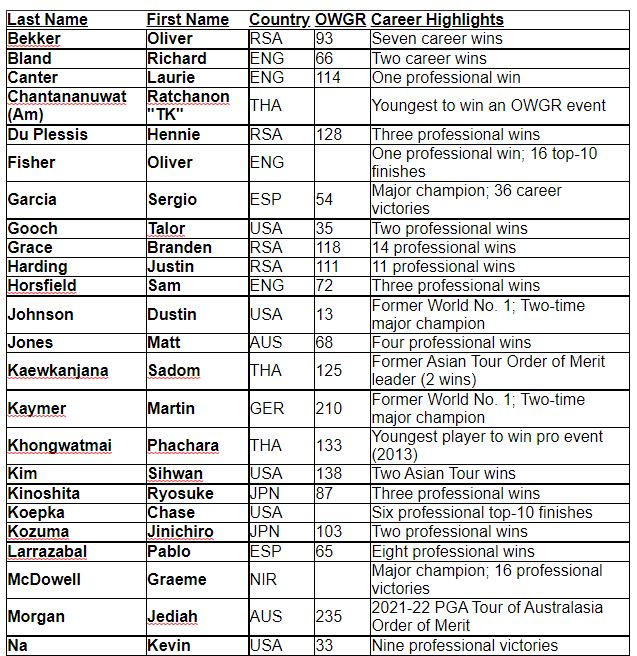 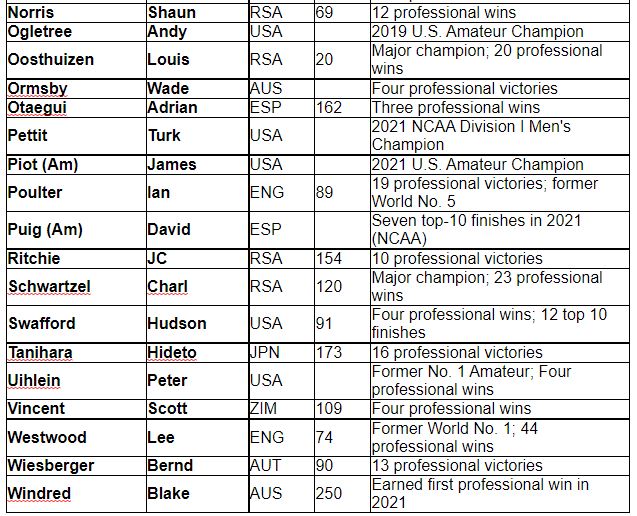 * Note: The final six players will include Commissioner’s invites and berths following the results of The Asian Tour International Series England tournament, June 2-5 at Slayley Hall. Announcements will be made by Monday, June 6.

“Free agency has finally come to golf. This is an opportunity to start a movement that will change the course of history by bringing new and open competition to the sport we all love. The desire shown by the players to participate in LIV Golf demonstrates their emphatic belief in our model and confidence in what we’re building for the future,” said Greg Norman, CEO and Commissioner of LIV Golf. “We couldn’t be happier at the diversity of our field, featuring players from around the world including major champions and those making their debut with us competing in their first professional event. We can’t wait to start our journey at Centurion Club with this group of first movers who are committed to growing the game in new and exciting ways.”

Offering opportunities for players from around the world, the LIV Golf Invitational London field welcomes leading players from the Asian Tour, DP World Tour, PGA Tour, Sunshine Tour, PGA Tour of Australasia and Japan Golf Tour, as well as offering places to the leading players from The International Series, which launched in Thailand in March, and highest finishing players from the International Series England, which takes place at Slayley Hall this week (June 2-5). LIV Golf’s broad spectrum of exemption categories is designed to ensure LIV Golf delivers new opportunities for international golfers, as well as player pathways into elite professional golf.

The 48-man field will play across 12 teams of four players each, which will be determined at The Draft on Tuesday, June 7. LIV Golf will appoint 12 team captains who will then select players in the first round in order of reverse OWGR ranking, and for the second and third rounds via a snake format. Team names and logos will also be unveiled at The Draft.

The first seven regular season events will consist of three 18-hole rounds for a total of 54 holes, with no cut, and shotgun starts to ensure a faster and more exciting pace of play. The eighth and final event will be a four-day team match play seeded knockout. Each Regular Season event will essentially be two simultaneous competitions – an individual and team event. The individual winner will be the player with the lowest 54-hole stroke play total. For the team competition, the best two stroke play scores will count for each team for the first two rounds. For the third and final round, the best three scores will count, with the lowest overall team score after 54 holes being named the team winner.

LIV Golf is owned and operated by LIV Golf Investments whose vision and mission are centered around making holistic and sustainable investments to enhance the global golf ecosystem and unlock the sport’s untapped worldwide potential.