BOLTON, Mass – LIV Golf announced the 12 teams from the 48-player field competing in the LIV Golf Invitational Boston. This is LIV Golf’s fourth event of the season, which tees off September 2-4 at The International. The LIV Golf Invitational Series features teams of four where players compete as individuals and teams for both points and prize money.

All members of the four-player teams will compete in the three-day tournament. The player with the lowest 54-hole stroke play total will be the individual winner. In the team competition, the best two stroke play scores in the first two rounds will count for each team. For the third and final round, the best three scores will count. The lowest overall team score after 54 holes will be the team winner. Teams will compete for a $5 million purse, with $3 million to first place, $1.5 million to second and $500,000 to third. Each player will receive a 25% share of the earnings. 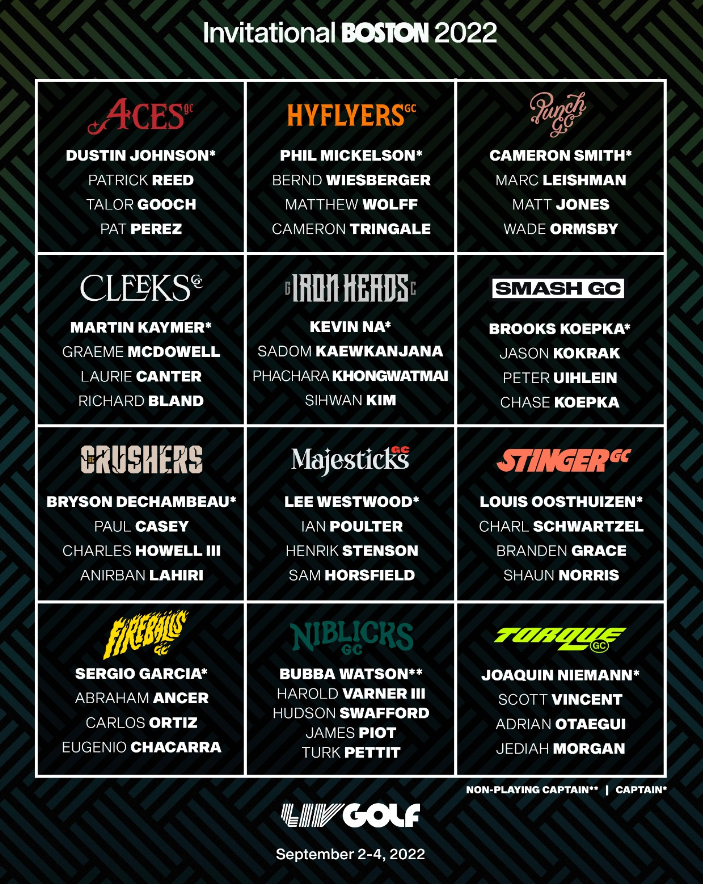 Below are notes on the teams for the LIV Golf Invitational Boston with teams listed in order of finish in Bedminster July 31:

* 4 ACES GC: Captain Dustin Johnson has assembled the team to beat. The all-American roster with Patrick Reed, Talor Gooch and Pat Perez has won consecutive team titles, by 7 strokes in Portland and 8 strokes in Bedminster, with a cumulative counting score of 48 under in those two victories. Johnson and Reed each finished in the top 5 individually in both events.

* MAJESTICKS GC: The move to add Swedish star Henrik Stenson paid immediate dividends for captain Lee Westwood. Stenson won the individual title in his LIV Golf debut in Bedminster, and Majesticks GC posted its best result as a team, finishing second. Stenson, Westwood, Ian Poulter and Sam Horsfield each finished under par in Bedminster, the only team to achieve that feat in any of the first three events.

* FIREBALLS GC: Captain Sergio Garcia’s team has finished in the top three in each of the last two events, but the Spanish-speaking foursome go into Boston with higher ambitions than another third-place result. Mexico’s Carlos Ortiz is a cumulative 19 under in his first two LIV Golf starts, and Garcia comes off his best performance. Mexico’s Abraham Ancer and Spanish rookie Eugenio Chacarra complete a talented group.

* STINGER GC: After a win in London and a second-place finish in Portland, captain Louis Oosthuizen’s squad finished outside the podium for the first time in Bedminster. Now comes the South African team’s first lineup change, with Shaun Norris replacing Hennie du Plessis. Norris turned pro in 2002; so did Oosthuizen and London winner Charl Schwartzel. Add Portland winner Branden Grace – who turned pro in 2007 – and Stinger GC has a combined 75 years of professional experience in its lineup. 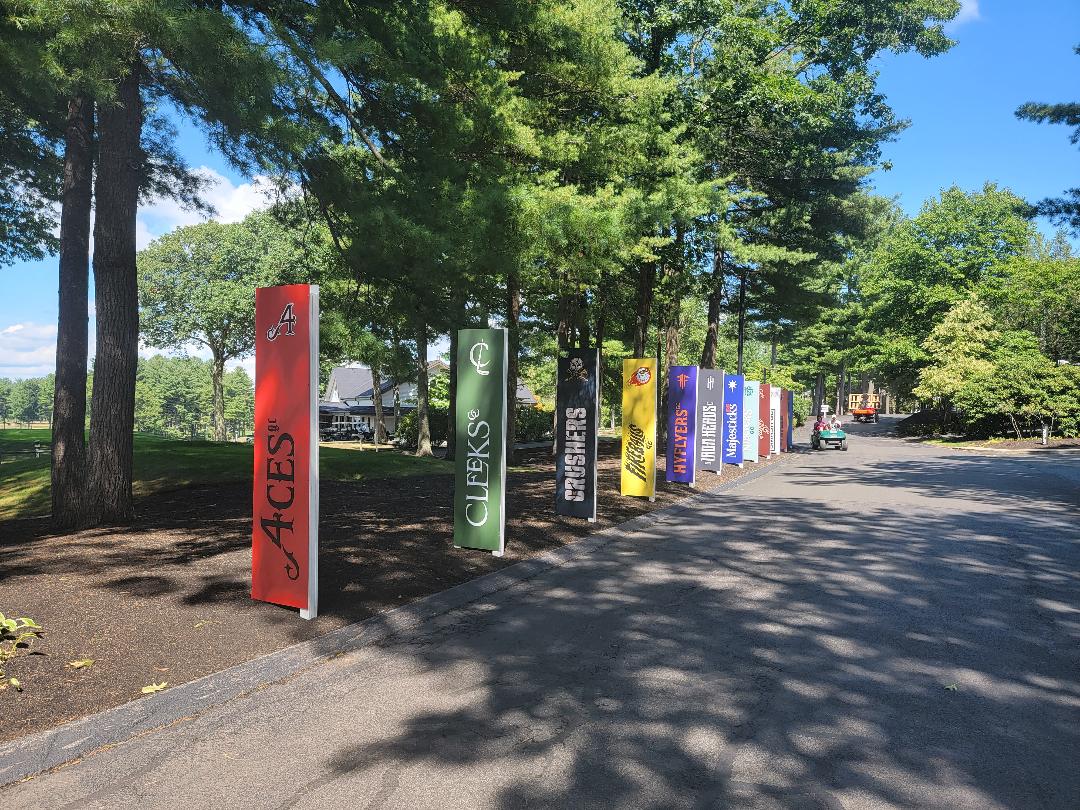 * SMASH GC: Another all-American lineup, this one with local ties. Massachusetts native Peter Uihlein joins captain Brooks Koepka’s team, replacing Englishman Richard Bland who moves to a new squad. Chase Koepka and Jason Kokrak are the holdovers for Smash GC. The Koepka brothers showed improvement in Bedminster, with Brooks shooting a final-round 66 to give him some momentum heading into Boston.

* IRON HEADS GC: The lineup that finished fifth in Portland is reuniting in Boston, as Sihwan Kim returns to LIV Golf thanks to his status on the International Series Order of Merit. Captain Kevin Na’s team might be poised to make some noise, with Thai golfers Phachara Khongwatmai and Sadom Kaewkanjana each coming off top-10 finishes at the recent International Series Korea.

* PUNCH GC: The all-Australian lineup gets a significant boost in star power, with world No. 2 and reigning Open champion Cameron Smith taking over the captaincy and 13-time winner Marc Leishman also joining the team. Both are making their LIV Golf debuts this week, which should pay immediate dividends for Punch GC, which has finished 12th and 11th since the lineup went full-Aussie. Former captain Wade Ormsby and fast-playing Matt Jones complete the roster. 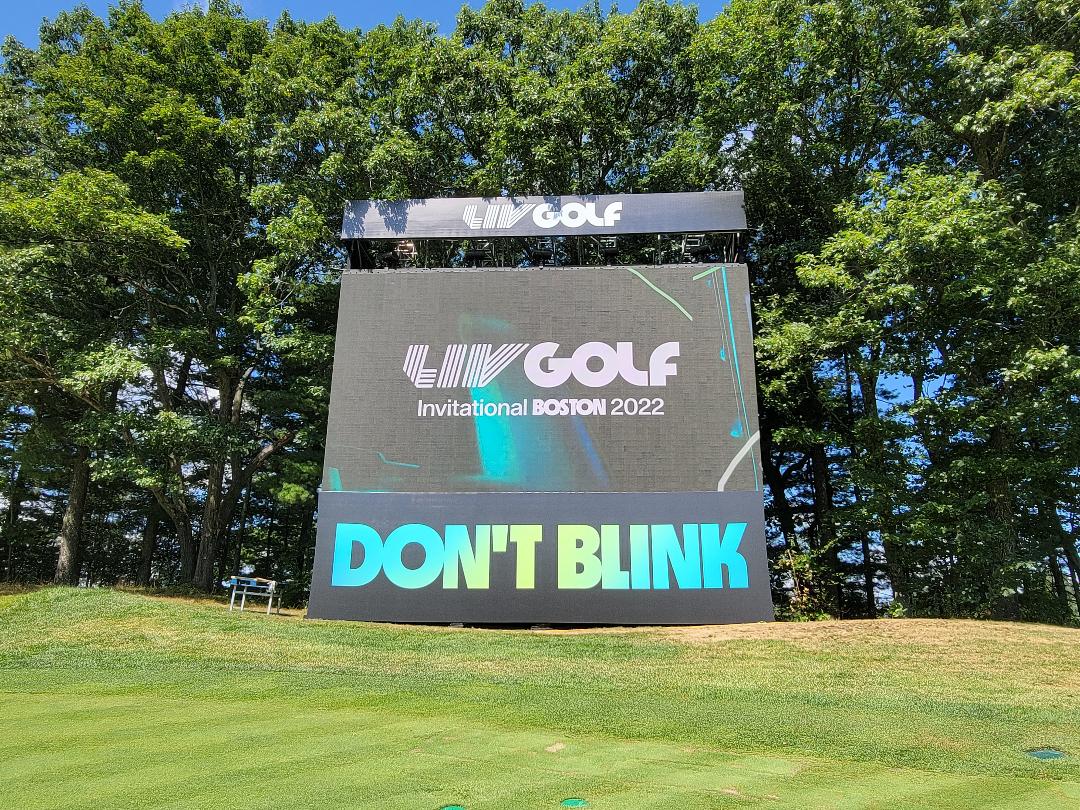 * TORQUE GC: The new-look Torque GC is headed by captain Joaquin Niemann, the world No. 19, who’s making his LIV Golf debut in Boston. His team includes Zimbabwe’s Scott Vincent, who is playing on his fourth different team in as many events; Australia’s Jediah Morgan; and Spain’s Adrian Otaegui, who played for the original Torque GC team in London prior to a roster shakeup.

Led by the 1-2 punch of Johnson and Reed – who each finished inside the top 5 in the individual standings at LIV Golf’s second and third events – the American foursome will try to make it three straight team titles against a field that welcomes six notable names making their LIV Golf debuts. New players include world No. 2 and 2022 Open Champion Cameron Smith, world No. 19 and top Chilean golfer Joaquin Niemann, Harold Varner III (No. 46), Cameron Tringale (No. 55), Marc Leishman (No. 62) and India’s top-ranked pro Anirban Lahiri (No. 92). Amongst the newcomers, Smith (Punch GC) and Niemann (Torque GC) will serve as team captains in Boston along with two-time Masters champion Bubba Watson, who will debut as a non-playing captain for Niblicks GC and will make on-air contributions to live event coverage.