BOLTON, Mass – LIV Golf Invitational Boston, the fourth LIV Golf event of the year, tees off September 2-4 at The International and the 48-player field who have won half of the last 24 major championships, including six players making their LIV Golf debuts.

World No. 2 and 2022 Open Champion Cameron Smith, world No. 19 and top Chilean golfer Joaquin Niemann, Harold Varner (No. 46), Cameron Tringale (No. 55), Marc Leishman (No. 62) and India’s top-ranked pro Anirban Lahiri (No. 92) will join the field of 48 competing. Also making his first LIV Golf appearance is two-time Masters champion and former world No. 2 player Bubba Watson, who will debut as a non-playing captain and will make on-air contributions to live event coverage. 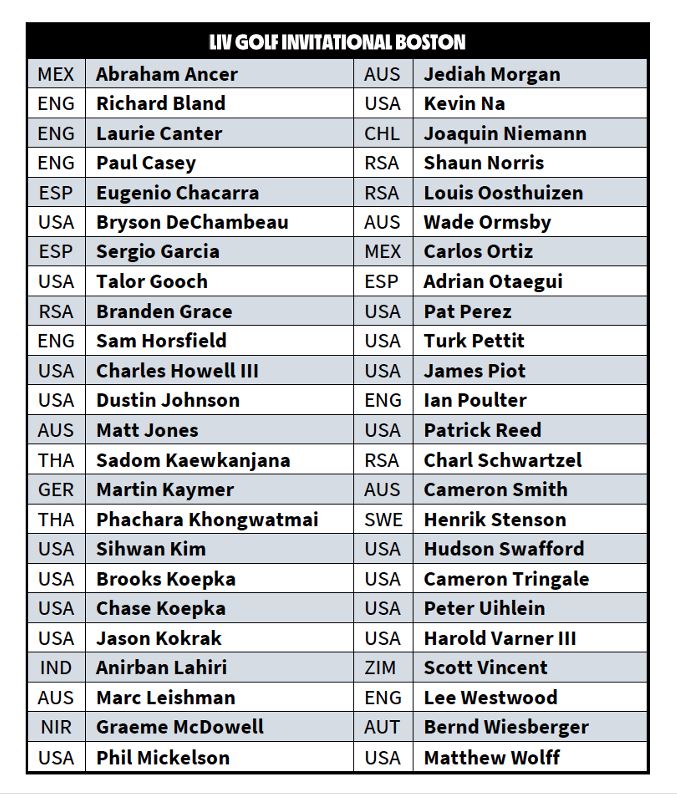 The Boston field showcases seven No. 1-ranked players within their respective countries, 12 major champions with a combined 22 majors, and four former world No. 1 players. The global field has 13 Olympians, represents 14 different countries, features 20 players with 10 or more professional wins and includes current and future stars of the game who have earned NCAA National Championships and US Amateur Championships among their accomplishments. Players will compete in golf’s most exciting new format for $25 million and the chance to become LIV Golf’s fourth individual and team champions and earn points towards LIV Golf’s season-long individual competition.

“LIV Golf is showing the world that our truly global league is attracting the world’s best players and will grow the game into the future for the next generation,” said Greg Norman, CEO and Commissioner of LIV Golf. “The best and the brightest continue to embrace the excitement and energy of LIV Golf and what we’re building: a tangible league for team golf that will connect with new audiences all over the globe. We can’t wait to tee off this week at The International and deliver another memorable event experience for fans.”

The LIV Golf Invitational Boston offers opportunities for golfers from around the world including the Asian Tour, DP World Tour, PGA Tour, Sunshine Tour, PGA Tour of Australasia and Japan Golf Tour, as well as leading players from The International Series, which launched in Thailand in March, and top finishers from the LIV Golf Invitational Series. LIV Golf will continue to reward players that compete and perform well in LIV events, with a broad spectrum of exemption categories designed to ensure it delivers new opportunities for international golfers, as well as pathways for amateurs and the next generation of leading players, into elite professional golf.

The LIV Golf Invitational Series launched June 9 to a worldwide audience showcasing its new, innovative format with 12 teams, 48 players, shotgun starts and no cut. Building on LIV Golf’s successful start and the incredible feedback received from players and fans, it was announced on July 27 that the LIV Golf League will officially launch in 2023 with 12 established team franchises competing in a 14-tournament schedule. The full slate of events will be announced at a later date and is expected to expand LIV Golf’s global footprint across North and Latin Americas, Asia, Australia, the Middle East and Europe.

Complete, live coverage of LIV Golf tournaments is globally available direct to consumers on LIVGolf.com, YouTube and Facebook. LIV Golf event broadcasts are also aired live on a global roster of leading premium and free-to-air broadcasters providing coverage in over 180 territories around the world.