BOSTON, Mass – LIV Golf has announced the field for its third event of the season, the LIV Golf Invitational Bedminster, teeing off July 29-31 at Trump National Golf Club Bedminster. The field includes the debut of No. 32 ranked Paul Casey, a 21-time winner as a pro who has represented Europe in five Ryder Cup team competitions. The English standout has annually performed among the globe’s best, having been ranked as high as No. 3 in the world.

Casey joins a Bedminster field that will showcase 10 major champions with a combined 20 majors won, four former world No. 1 players and nearly half of its competitors currently ranked in the top 100. The global field represents 12 different countries, features 16 players with 10 or more professional wins and includes future stars of the game who have earned NCAA National Championships and US Amateur Championships among their accomplishments. Players will compete in golf’s most exciting new format for $25 million and the chance to become LIV Golf’s third individual and team champions and earn points towards LIV Golf’s season-long individual competition. 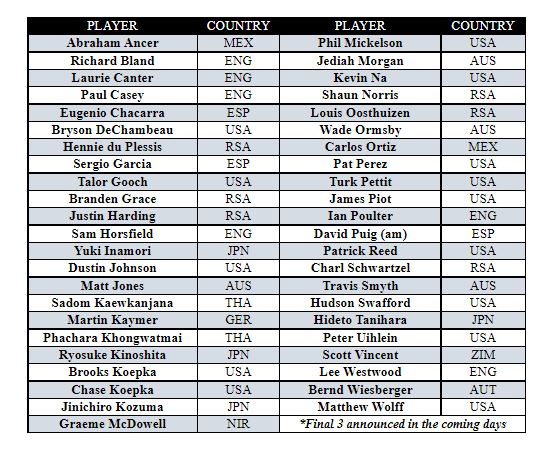 “It’s been an historic two months for LIV Golf as we’ve established a new era for the sport that delivers unique energy, camaraderie, and competition. In just six rounds of live action, we have created a golf environment that has captured the world’s attention and attracted young, passionate fans around the globe,” said Greg Norman, CEO and Commissioner of LIV Golf. “We are excited to take another giant leap forward at the beautiful Trump National Golf Club Bedminster where our players are eager to tee off in pursuit of the third individual and team titles of the season.”

The 48-man field will play across 12 teams of four players each. Teams will be announced in the days leading up to the tournament start.

The LIV Golf Invitational Bedminster offers opportunities for golfers from around the world including the Asian Tour, DP World Tour, PGA Tour, Sunshine Tour, PGA Tour of Australasia and Japan Golf Tour, as well as leading players from The International Series, which launched in Thailand in March, and top finishers from the LIV Golf Invitational Series. LIV Golf will continue to reward players that compete and perform well in LIV events, with a broad spectrum of exemption categories designed to ensure it delivers new opportunities for international golfers, as well as pathways for amateurs and the next generation of leading players, into elite professional golf.

The LIV Golf Invitational Series launched June 9 to a worldwide audience showcasing its new, innovative format with more action, shotgun starts and no cut. Complete, live coverage of LIV Golf tournaments is globally available direct to fans on www.LIVGolf.com, YouTube and Facebook. LIV Golf event broadcasts are also aired live on a global roster of leading premium and free-to-air broadcasters providing coverage in over 150 territories around the world. The list of international networks covering the LIV Golf Invitational Series is available on www.LIVGolf.com.

LIV Golf’s fourth event of the season, LIV Golf Invitational Boston, is scheduled at The International in Bolton (MA) Sept. 2 – 4. Only 6,500 fans are allowed each day and tickets are almost sold out. https://tickets.livgolf.com/2022-boston