MARION, Mass – The United States Golf Association accepted a record 2,865 entries for the 67th U.S. Senior Amateur, to be played Aug. 27 to Sept. 1, 2022 at The Kittansett Club in Marion (MA). The elite amateur tournament is open to any golfer 55 years or older (as of Aug. 27) and whose handicap does not exceed 7.4. The field is comprised of 156 players, who qualified from 51 sites across the United States.

There is no shortage of accomplished and highly-decorated senior players in the state of Florida which will field 19 players followed by California with 17 and Georgia and Texas with 9. The New England player breakdown is Massachusetts (4) Connecticut (3) and New Hampshire (1)

He is one of four Massachusetts residents in the field along with Thomas Bagley (Concord), Michael Boden (Sandwich) and Donald Foberg (Pembroke). Vana will hit the opening tee shot Saturday Aug. 27 playing in the 7 a.m. group on Hole No. 1.

Frank Vana, 60, is the winningest golfer in Mass Golf history. He has been named Mass Golf Player of the Year a record nine times and was inducted into the Mass Golf Hall of Fame in 2016. Vana has won the Massachusetts Mid-Amateur a record 10 times and has been a finalist in the Massachusetts Amateur six times, winning back-to-back years in 2004 and 2005. He reached match play in 24 consecutive Mass Amateurs and most recently won the 2020 New England Senior Amateur. Vana, who is competing in his fifth straight U.S. Senior Amateur, has played in 34 USGA championships, including 10 U.S. Amateurs and the 2018 U.S. Senior Open.

Two rounds of stroke play are set for Saturday Aug. 27 and Sunday Aug. 28, with the low 64 moving to match play, which concludes with the 18-hole championship match Thursday, Sept. 1. 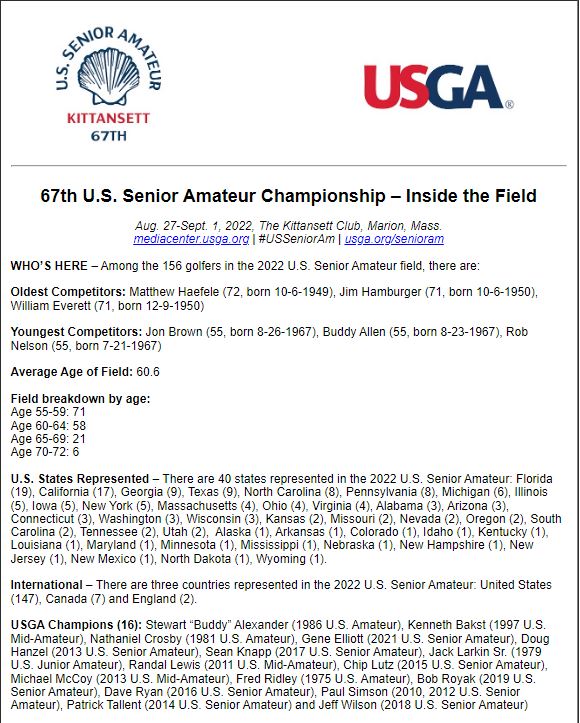 Thomas Bagley, 65, of Concord, Mass., qualified for his first USGA championship with a 70 at Captains Golf Course (Starboard Course) on July 18. Bagley served as president of Mass Golf from 2016-2017 and continues to serve as a Rules official and chair of the governance committee. He also serves as committee chair for the Massachusetts Golf Hall of Fame. Bagley, an independent insurance agent, has competed in nine Massachusetts Amateurs with his best finish coming in 2007 at his home course, Concord Country Club, when he reached the Round of 16. Bagley was the official-in-charge of the 2022 Massachusetts Amateur at Concord C.C. in July and a practice round starter at the U.S. Open at The Country Club (Brookline) in June.

Michael Boden, 55, of Sandwich, Mass., shared medalist honors with a 69 at Captains Golf Course (Starboard Course) on July 18, a round that included an eagle 2 with a 6-iron on the 425-yard, par-4 16th, to earn a spot in his first USGA championship. Boden, a former golf professional at Hyannisport Club, played college hockey at SUNY-Plattsburgh and minor league hockey for several years with the Johnston Chiefs.

Fred Ridley, 70, of Tampa, Fla., is a past president of the USGA (2004-05) and current Chairman of Augusta National Golf Club and the Masters Tournament. He captured the 1975 U.S. Amateur and remains the last champion of the event to never have turned professional. He won both singles matches as a member of the winning 1977 USA Walker Cup Team and captained the USA Walker Cup Team in 1987 and 1989. A partner in the Foley & Lardner law firm, Ridley has played in 18 USGA championships, including the 2011 and 2021 U.S. Senior Amateurs. In 1976, he competed in the U.S. Open and was a member of the USA World Amateur Team. He played at the University of Florida and was mentored by renowned instructor Jack Grout, who was the longtime coach to 18-time major winner Jack Nicklaus. Ridley became Chairman of Augusta National Golf Club in 2017. During his first Masters Tournament as Chairman in 2018, he announced the creation of the Augusta National Women’s Amateur.

Nathaniel Crosby, 60, of Jupiter, Fla., is competing in his first USGA championship in 26 years. Crosby captained the last two USA Walker Cup teams to victories at Royal Liverpool in 2019 and Seminole in 2021. He won the 1981 U.S. Amateur at The Olympic Club in San Francisco, Calif., and a year later was the low amateur in the U.S. Open at Pebble Beach. Crosby was a member of victorious USA teams in both the 1983 Walker Cup Match and the 1982 World Amateur Team Championship. He currently serves as chairman of a network of small travel societies that are tied to rank-worthy golf clubs in vacation and second-home destinations. Crosby is the son of the late legendary American singer and entertainer Bing Crosby, who played in the 1942 U.S. Amateur at Winged Foot Golf Club.

Jerry Gunthorpe, 59, of Ovid, Mich., was the runner-up in last year’s U.S. Senior Amateur at the Country Club of Detroit. As a finalist, Gunthorpe earned an exemption into the 2022 U.S. Senior Open and 2022 U.S. Amateur where he competed earlier this month as the oldest player in the field. In March, Gunthorpe won the Golfweek Senior Division National Championship. His two sons, Nathan and Nick, have both qualified for USGA events.

► Where: The Kittansett Club