BOLTON, Mass – LIV Golf has announced the field for its fourth event of the year, the LIV Golf Invitational Boston, teeing off September 2-4 at The International. The 48-player field has won half of the last 24 major championships.

The field includes six players making their LIV Golf debuts, including world No. 2 and 2022 Open Champion Cameron Smith, world No. 19 and top Chilean golfer Joaquin Niemann, Harold Varner III (No. 46), Cameron Tringale (No. 55), Marc Leishman (No. 62) and India’s top-ranked pro Anirban Lahiri (No. 92) who will join the field of 48 competing in Massachusetts. Also making his first LIV Golf appearance is two-time Masters champion and former world No. 2 player Bubba Watson, who will debut as a non-playing captain and will make on-air contributions to live event coverage. 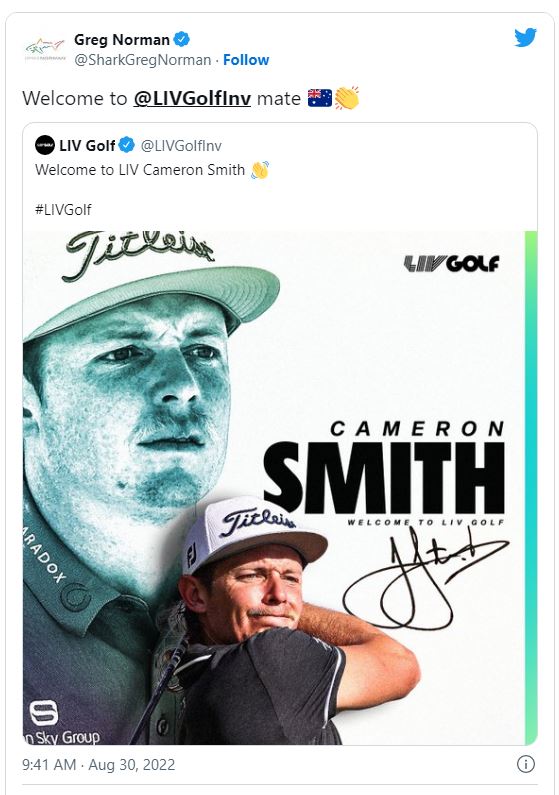 As the world’s No. 2 golfer, Cameron Smith becomes the highest-ranked player to compete in a LIV Golf event. Winner of the 2022 Open Championship in July at St Andrews, the 150th playing of golf’s oldest major, the Australian has 8 professional wins including the Players Championship earlier this year. The 29-year-old joins the list of LIV golfers who have met the minimum playing eligibility requirements for the World Golf Hall of Fame, though he must wait another 16 years until the minimum age requirement of 45 before official consideration. Smith has amassed 48 additional top-10 finishes and is a consistent contender in the majors, including finishing T-4th at the 2015 U.S. Open – his first major start – and earning four top-10 finishes at the Masters (T-5th 2018, T-2nd 2020, T-10th 2021, T-3rd 2022). A two-time Australian PGA Championship winner (2017-2018), Smith has also represented his home country in international team competitions including the 2018 World Cup, the 2019 Presidents Cup and the Tokyo Olympics.

Chile’s top professional golfer, the 23-year-old Niemann jumped onto the global golf scene as a teenager. As the World Amateur Golf Rankings’ No. 1 player for 44 weeks between 2017-2018, he earned victories against top international players on the Chilean Tour before turning pro in April 2018. The current world No. 19 golfer has two professional wins, 26 top-10 finishes, and represented Chile as part of the International Team in the 2019 Presidents Cup and the Tokyo Olympics.

Harold Varner III, currently 46th in the world, is a two-time winner as a pro including the 2015 Australian PGA Championship and the 2022 PIF Saudi International presented by Softbank Investment Partners. The memorable Asian Tour event featured a thrilling finish, where Varner sunk a 92-foot eagle putt on the 18th hole to defeat fellow LIV Golf competitor Bubba Watson by 1 stroke. Consistently a fan favorite, Varner has 24 top-10 finishes over his professional career, which began in 2012 following a successful collegiate career at East Carolina University where he earned honors as Conference USA Player of the Year.

For more than 80 consecutive weeks, American Cameron Tringale has been ranked among the world’s top 100 players. The California native has 30 top-10 finishes in his career and was a three-time NCAA All-American at Georgia Tech. Lahiri, a two-time Olympian for India, has amassed 18 wins and an additional 55 top-10 finishes throughout his professional career. Runner-up at the 2022 Players Championship to winner Cameron Smith, he has twice represented the International Team at the Presidents Cup (2015, 2017), is a three-time representative for Asia in the EurAsia Cup (2014, 2016, 2018), and is a two-time competitor in the World Cup (2013, 2018).

The Boston field showcases seven No. 1-ranked players within their respective countries, 12 major champions with a combined 22 majors, and four former world No. 1 players. The global field has 13 Olympians, represents 14 different countries, features 20 players with 10 or more professional wins and includes current and future stars of the game who have earned NCAA National Championships and US Amateur Championships among their accomplishments. Players will compete in golf’s most exciting new format for $25 million and the chance to become LIV Golf’s fourth individual and team champions and earn points towards LIV Golf’s season-long individual competition.

Complete, live coverage of LIV Golf tournaments is globally available direct to consumers on LIVGolf.com, YouTube and Facebook. LIV Golf event broadcasts are also aired live on a global roster of leading premium and free-to-air broadcasters providing coverage in over 180 territories around the world. The list of global networks covering the LIV Golf Invitational Series is available on LIVGolf.com.