The 36-hole final match of the 2021 Mass Amateur was billed as the clash of the Bay State’s top two golf heavyweights.

Making his third appearance in the final match of the state amateur was 34-year-old Brockton-native Matt Parziale, of Thorny Lea GC, owner of the 2017 U.S. Mid-Amateur Championship and 2017 Mass Amateur championship.

His opponent – 19-year-old Michael Thorbjornsen, of Wellesley CC, winner of the 2018 U.S. Junior Championship – who is entering his sophomore year at Stanford University.

Road to the Finals

Road to the Finals

Thorbjornsen absolutely torched the 6,806 yard par 72 Brae Burn course, a Donald Ross design featuring rolling landscape, perfect conditioned fairways and sloping greens. He birdied his first five holes to go 4-up through nine and never looked back. When all the stokes were added Thorbjornsen posted a stunning 1-under 62. Parziale played well posting a 67 but was 6-down after 18. The match ended on the par 3 12th with both players exchanging pars and a decisive 8 & 6 win. After the match, Thorbjornsen credited his girlfriend and caddy, Cori, with a “shout out” for going the distance (127 holes) and recording their first win together with her on the bag.

“Today definitely. I just felt very comfortable, probably the most comfortable I felt all week,” the smiling Thorbjornsen said while holding the Massachusetts Cup trophy, that includes legendary names like Francis Ouimet, Ted Bishop, Jim Hallet, James Driscoll, Frank Vana and many more. “I tied the course record on the second day of the tournament and it felt like I left a couple of shots out there. Today, I probably hit the ball about the same. I made a couple more putts and made a lot of birdies, which is very important in match play, especially playing against a guy like Matt.”

“I drove the ball unbelievably this week. Being able to put myself in the fairway, giving myself chances to attack pins, it’s hard to mess up when you’re setting yourself up perfectly like that. I feel like with the distance that I have kind of overpowered it a bit. I understand, that there are a lot of birdies out there, so just staying patient and then knowing that every par-5 is reachable, it’s just a long par-4, and that there are three par-4s that are drivable, just makes me feel comfortable.”

Matt Parziale is now 1-2 in state amateur final matches with his first loss coming in 2008 to Thorney Lea GC clubmate John Hadges at The Kittansett Club. Despite some off-course set-backs in the past 12 months, including recovery from a broken arm in February caused while arm-wresting with a friend, Parziale was his usual courteous and genial self-offering high praise for the new 19-year champion.

“I was happy with how I played,” said Parziale, who father Vic caddied all 130 holes. “If I played poorly then I’d probably feel differently, but I was happy with the way I played. Today is the day where one person is most happy and one person is the most upset. That’s the nature of this tournament. It was great to get here, but you lose, so you’re not happy. At least I played well and he just played incredibly, so congratulations to him.”

“Michael played flawless for most of the day. He’s a world-beater. He’s incredible. I met him a few years ago. He’s a great kid, he’s got all the talent in the world. I’m rooting for him, and it’s his to take. He has a bright future if he keeps going at this pace.”

Thorbjornsen, closed out his stroke play by making a birdie putt on the final hole to tie the competitive course record with a bogey-free 8-under-par 64, capping off his 36-hole total at 7-under 137. The record lasted exactly three days since his final round 10-under 62 broke his own record.

The Massachusetts Amateur Championship, first contested in 1903, is one of the oldest and most venerated titles. Unique in its appeal and format, it challenges competitors with grueling rounds of stroke and match play over the course of five days, and this year more than 800 golfers submitted entries with seven qualifying sites needed to advance to the tournament proper. 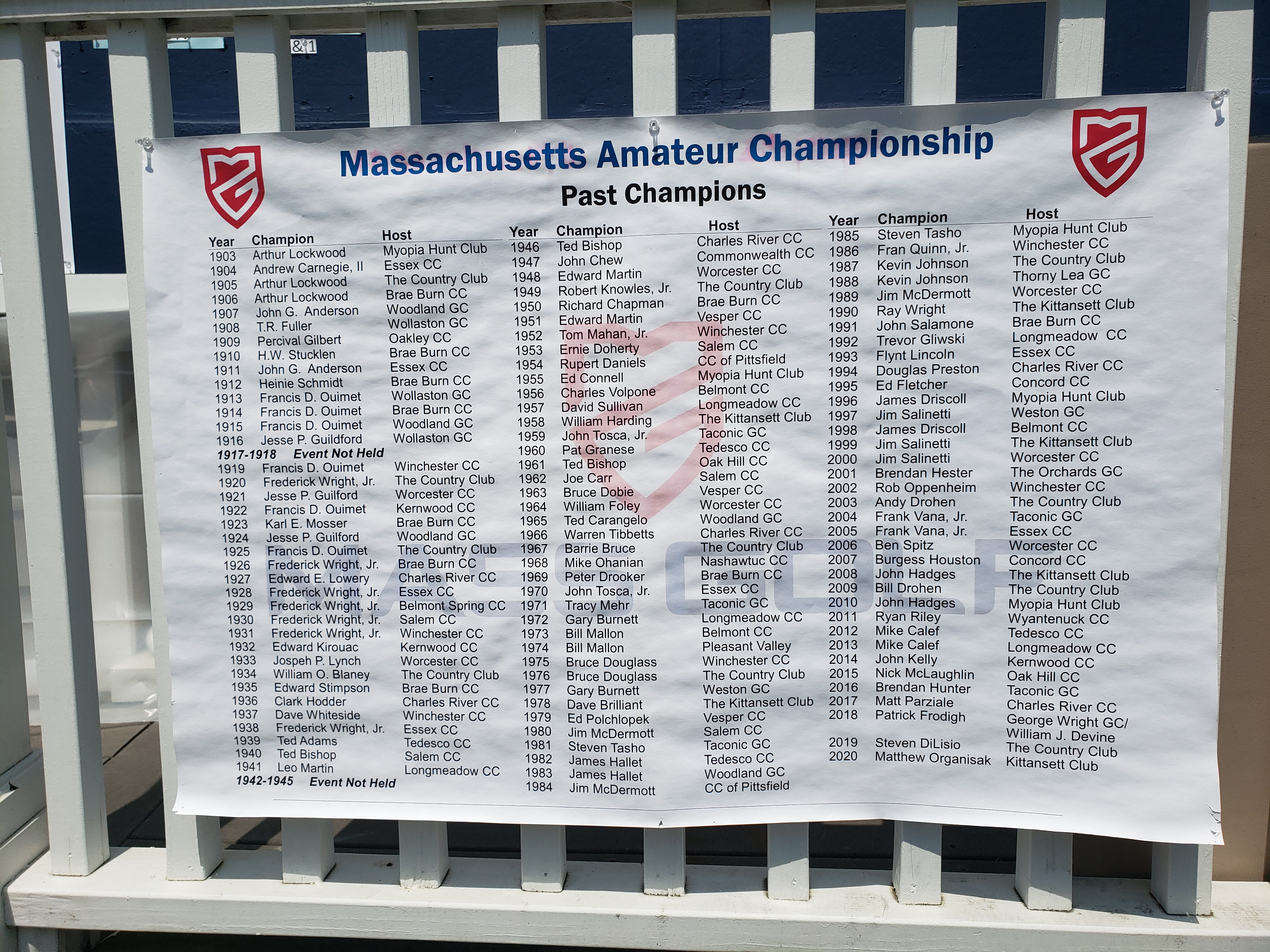