BROOKLINE, Mass – The United States Golf Association has created a unique twist for the 122nd playing of the U S Open at The Country Club in Brookline, Mass, a 27-hole club.

That is surely easier said than done, considering the club opened in 1894 and has hosted 16 USGA championships. The USGA will use a composite course including 14.5 holes from the main course (the Clyde and Squirrel 9s) and 3.5 holes from the Primrose 9, stretching to 7,264 yards with a 35-35 par 70. The ninth and tenth holes of the main course will serve as the driving range.

The USGA is debuting a new hole for the Open that has never been used at the three previous U S Opens at The Country Club (1913, 1963, 1988). It is a 130-yard downhill par-3 that will serve as the 11th hole which is typically the 12th hole of the club’s main course. It can play as short as 105 yards or as long as 142, and the USGA plans on giving the players that yardage differential on consecutive days.

It will be one of the shortest holes in U S Open history, but it provides plenty of bite with a tabletop green that rolls off on all sides and four bunkers defending the green which was expanded to its original size by architect Gil Hanse. The new hole is sandwiched between two par 4s of 499 and 473 yards. To make room for this new hole, they eliminated what was previously the par fourth hole.

“There is not enough short holes in golf anymore,” says Jeff Hall, Championship Director for the USGA. “It’s a pitching wedge hole, but, it still demands execution at a high level, and if you don’t, you will pay the price.”

Next year’s tournament scheduled June 16-19 will be the first USGA Championship at TCC since the 2013 U S Amateur. Tickets sold out in three days when they went on sale June 18. The three previous U S Opens at the club all finished in a playoff, including the 1913 championship where amateur Francis Ouimet defeated the top golfers in the world and put American golf on the map. The Country Club is also famous for hosting the 1999 Ryder Cup in which the United States completed a raucous comeback on the final day.

“It’s fantastic to come back to one of our founding clubs,” adds Hall. “It’s old school. You stand on the first tee at The Country Club and look out and say, ‘this is a U S Open golf course.'”

The course has undergone several small renovations over the past decade to get ready for next year’s Open and account for today’s big hitters. The other significant change is the 14th hole which previously played as a par 4 that has been expanded to a 619-yard par 5. “It’s a legitimate three-shot hole,” says Hall.

Another unique hole will be #5, a 310 yard par-4 that has a new, elevated tee box. The green is tiny and surrounded by several bunkers, but today’s big hitters will definitely be aiming at the flag, and maybe not even with the driver. It will be fun to watch the players play it. Not really a strategic approach, and depending where they are on the leaderboard when they reach the tee box some will definitely go after it, even with a smallish target.

The rough will be unforgiving which is customary at U S Opens. the first cut will be 1.5 inches, some holes will have a second cut at 3, and the deep rough could be as high as 5 inches. The thought process is putting a premium on driving the ball in the fairway, and then controlling the approach shot to land on the green. 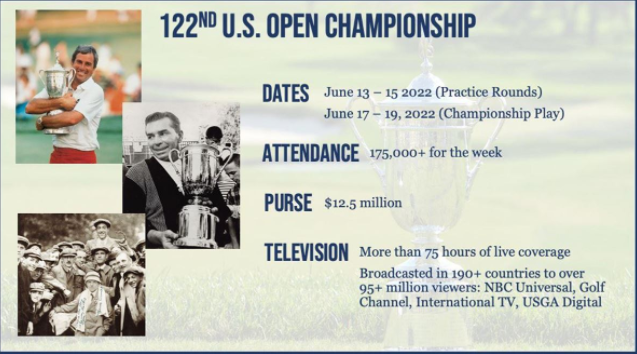 On the web: U.S. Open, The Country Club