BOSTON, Mass – The United States Golf Association (USGA) announced that it will allow players who compete in LIV Golf’s opening tournament this weekend June 9-11 in London to play the U.S. Open next week.

The U.S. Open is one of 13 events organized by the USGA. The organization said it would be unfair to change the criteria of the rules for participation in the event last minute to bar those who have chosen to play in LIV Golf’s first tournament.

The statement from the USGA reads:

“We pride ourselves in being the most open championship in the world and the players who have earned the right to compete in this year’s championship, both via exemption and qualifying, will have the opportunity to do so. Our field criteria were set prior to entries opening earlier this year and it’s not appropriate, nor fair to competitors, to change criteria once established.”

“Regarding players who may choose to play in London this week, we simply asked ourselves this question – should a player who had earned his way into the 2022 U.S. Open, via our published field criteria, be pulled out of the field as a result of his decision to play in another event? And we ultimately decided that they should not.”

“Our decision regarding our field for the 2022 U.S. Open should not be construed as the USGA supporting an alternative organizing entity, nor supporting of any individual player actions or comments. Rather, it is simply a response to whether or not the USGA views playing in an alternative event, without the consent of their home tour, an offense that should disqualify them for the U.S. Open.“ 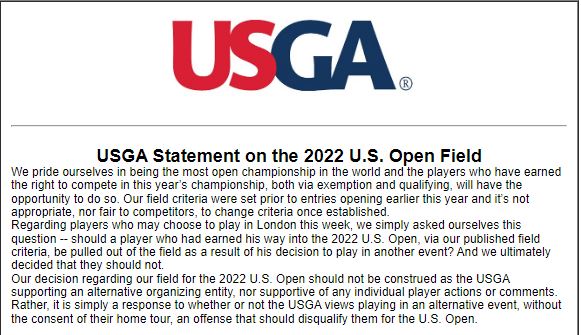 The 122nd U.S. Open will be played June 16-19 at The Country Club in Brookline with the world’s best players, excluding Tiger Woods who withdrew due to injuries suffered in a car accident in February 2021.