New York State junior champion in skiing and golf, where she played on her high school boys’ team. Standout golfer at the University of North Carolina. Two stints on the LPGA Tour. Three-time Connecticut Women’s Open champion. First woman to win a PGA of America individual men’s championship in 2002 to become the first female to qualify for a PGA Tour event in 57 years. First female elected an officer of the PGA of America in 2014 and now president of the national organization until October 2020.

Whaley, a longtime Connecticut resident now living in Palm Beach Gardens, Fla., added to her resume last week when she captained the United States team to victory in the inaugural Women’s PGA Cup at the Omni Barton Creek Resort & Spa’s Foothills Course in Austin, Texas. The Americans built an early 10-stroke advantage in the first 54-hole international event for women PGA professionals, but as often happens in golf, the outcome wasn’t decided until the final nine holes, with the U.S.’s 23-over-par 671 edging Canada by four shots.

“Coming down the stretch, the players fought so hard,” Whaley said of her five-women team. “They came out a little slow, but hung in there. They did their jobs. Each one of them had to stay in the process and control only what they could control.

“The event was just fantastic, and while the USA team came away with the win, it was truly a win for women’s golf. We showcased female PGA professionals from around the world and their playing capabilities, and we had the opportunity to network and share best practices amongst each other. We share a passion for the game, and we want everyone to have the opportunity to enjoy golf.” 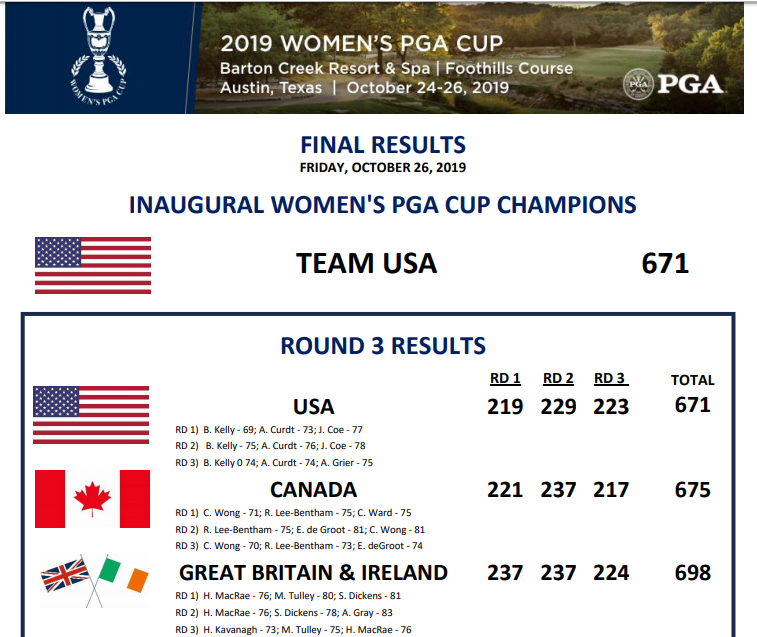 Brittany Kelly of Indianapolis, Ind., was the anchor for the winners, finishing 54 holes at 2-over 218 and earning her team’s collective water spray affection on the 18th green.

“We all needed to stick to our game plan and forget the first two days,” said Kelly, the reigning Indiana Women’s Open champion. “I had my moments. I always like to keep it interesting. I knew my teammates had my back. This was amazing to represent your country and play with the best players in the country. I think that this will grow, and I would love to see more countries compete.”

Other members of the triumphant side were Alison Curdt of Reseda, Calif. (223), Ashley Grier of Springfield, Pa. (234), Seul-Ki Park of Billerica, Mass. (238) and reigning Women’s PGA Stroke Play champion Joanna Coe of Lutherville-Timonium, Md. (232). The scores of Kelly and Curdt were used each day, with Kelly’s opening 3-under 69 the low round of the tournament by two strokes. Meanwhile, Park, the assistant pro at Winchester (Mass.) Country Club, had an early celebration for her marriage Sunday in Rowley, Mass.

“Everybody counted this week, which was great to see,” Whaley said. “Every single player put up the numbers when they needed to do it.”

Whaley previously captained five PGA Junior League teams to national championships and also was the assistant women’s golf coach at Quinnipiac University in Hamden on a volunteer basis while her younger daughter, Jennifer, was on the team.

When asked to rate the week, Whaley gave it an “A-plus,” adding, “It was tremendous to be part of the team, and I’m so proud to have an inaugural Women’s PGA Cup and really proud of the grit and determination the five PGA professionals showed to take home the trophy with the United States of America on it.”

Whaley is a PGA Master Professional and the PGA Director of Instruction at The Country Club of Mirasol in Palm Beach Gardens. She played on the LPGA Tour in 1990 and 1993 and won the 2002 Connecticut Section PGA Championship to qualify for the PGA Tour’s Greater Hartford Open. She was the first to accomplish that feat since the legendary Babe Didrikson Zaharias in the Los Angeles Open in 1945.

Great Britain & Ireland finished third at 698, followed by Australia (715) and Sweden (725). The best three of five scores each day determined the team totals.

The first women’s professional team competition in Austin’s storied golf history featured a field that had a variety of personal golf journeys. Perhaps Bronte Colbert, a PGA Teaching Professional from Huntingdale Golf Course in Victoria, Australia, led the list. Colbert’s home is in Perth, and she traveled 35 hours to get to the tournament. Her first trip to the U.S. included a flight from Perth to Brisbane, Australia, then a seven-hour stint in the airport due to a connecting flight delay and her bags not being checked through.

“All in all, it has been a great experience,” she said.

The Women’s PGA Cup will be renewed in 2021, with the site to be announced.