WORCESTER, Mass – Fans attending the U.S. Open at The Country Club in Brookline June 16-19 will be able to watch the best golfers in the world compete. They’ll also be able to check out golf balls and clubs used by U.S. Open champions from long ago.

More than 25 artifacts from the USGA Golf Museum and Library in Liberty Corner, N.J., will be on display at no charge, including clubs that were used at TCC by champions Francis Ouiment in 1913 and Curtis Strange in 1988.

Those clubs were among the items that the USGA brought to the U.S. Open media day at TCC on May 2.

Ouimet’s putter and champion’s medal will be on display along with the golf balls that Ouimet, Ted Ray and Harry Vardon used in the 1913 playoff that Ouimet won by five shots. Ouimet, a 20-year-old amateur and former caddie at TCC, lived across from the 17th hole. His upset of the heavily favored Britons is credited with popularizing golf in the U.S.

“The bramble was designed with a textured surface in a way to increase the distance for the ball to travel,” USGA historian Maggie Lagle, “and the square mesh was invented to hopefully increase spin of the ball.”

None of the golf balls had logos.

“It was the age before the brands,” said Hilary Cronheim, senior director of the museum and library.

Golf fans will also be able to see the driver and sand wedge that Curtis Strange used while winning the U.S. Open in 1988. Strange hit the sand wedge out of a greenside bunker on No. 18 in the final round to save par and force an 18-hole playoff with Nick Faldo. Strange shot an even-par 71 in the playoff to beat Faldo by four shots. 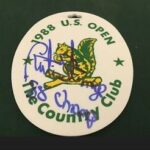 Strange also used the driver while repeating as U.S. Open champion in 1989 at Oak Hill CC near Rochester, N.Y.

Lagle said another highlight of the display will be a golf club made and used by John Shippen in the second U.S. Open, in 1896 at Shinnecock Hills GC in Southampton, N.Y. Shippen, a Shinnecock caddie, was the first African-American to play in the championship, but not before several players signed a petition threatening to boycott if he and Oscar Bunn, a Native American, were allowed to play. The petition was denied, the players relented and Shippen tied for sixth.

Fans will also be able to check out the 1-iron that Ben Hogan used while he won the 1950 U.S. Open, just 16 months after he was severely injured in a car accident.

On the web: USOpen.com/