CROMWELL, Conn. – Kramer Hickok could make it a Texas Daily Double in the Travelers Championship on Sunday.

Hickok was a Longhorn teammate and roommate of Jordan Spieth, whose 61-foot bunker shot on the first playoff hole to beat Daniel Berger in 2017 is the only such shot in overtime to win a PGA Tour event.

Hickok gained some of his own notoriety winning the DAP Championship on the Web.com Tour in 2018 after becoming Spieth’s roommate and then beginning his professional ambitions after graduating from Texas in 2015. The two have been friends since 2011 when they entered Texas as freshmen and teammates. Spieth left school the following year, while Hickok stayed until he graduated with a degree in geography. When Hickok turned pro, Spieth asked if he wanted to live in his house.

“It was either that or I was going to live with my mom and dad,” said Hickok, who like Spieth is from Dallas.

Unfortunately for Hickok, his career trajectory hasn’t been as steep as his former roommate. He was the Mackenzie Tour Order of Merit winner in 2017 with two victories and three runner-up finishes. After his Web.com Tour victory, Hickok made the PGA Tour the following year and has just managed to keep his card, once in the Web.com Tour Final and last season by virtue of no one losing his playing privileges because of the COVID-19 pandemic.

But entering the Travelers Championship at TPC River Highlands, Hickok had missed more cuts (10) than he had made (nine) and was 139th on the FedExCup points list this season. Despite increased winds that gusted to 25 mph in the afternoon, Hickok was 4 under par for 15 holes and made a 20-foot putt to save par at No. 16 to retain a two-stroke lead. But he hit approach shots over the green and made bogeys on the final two holes to shoot a 2-under 68 for a 54-hole total of 10-under 200 that put in a tie for the lead with three-time champion and fan favorite Bubba Watson.

“I hit the wrong club on 17 and have to admit that I had a little adrenaline at the end,” said Hickok, 29, who shared the first-round lead with Satoshi Kodaira at 63. “I’ve been struggling with my swing all week. It’s just one of those weeks where you don’t feel comfortable, but the shots are coming out where you’re looking. There are a lot of rounds where I felt a lot better about my swing and scored a lot worse, so I’m not complaining.

“It seems like my game has got better as the rounds have progressed. It played tricky and firm and really fast with the wind swirling, so to me it’s just all about giving yourself looks, getting yourself on the green and dancing. I think I’m just learning from my past experiences. I’ve been in contention and won on the Web.com Tour, so I just have to keep my nerves in check. But I’m happy with where I stand.”

Hickok is trying to win his first PGA Tour title in his 68th start, with his best finish being a tie for eighth in the 2020 Bermuda Championship. It appeared he would be one back entering the final round Sunday, but Watson missed a 4-foot birdie putt on the 18th hole after making an 18-footer at No. 17.

Watson shot 68 in a wild day in which he started a stroke behind Jason Day, took a two-shot lead when he made his third birdie of the day at the seventh hole, fell two back with a second three-putt for a third bogey at No. 16 before ending in a share of the top spot.

“I’m not going to worry about third or fourth place. I am going to try to go for it if I can,” Watson said. “I’m not going to change anything. I’ve played this golf course pretty good over the years (67.7 average), so my whole thing is just make birdies when you can. When the wind picks up like it did today, you just have to play steady. Hopefully tomorrow nobody goes really crazy so I have a chance when I hit the back nine.

“I expect to play good here, but winning it, that’s Tiger Woods level. I’m not near Tiger Woods or Jack Nicklaus level. To play good is one thing, so tomorrow when I tee off No. 10, hopefully I have a chance to challenge for the win.” 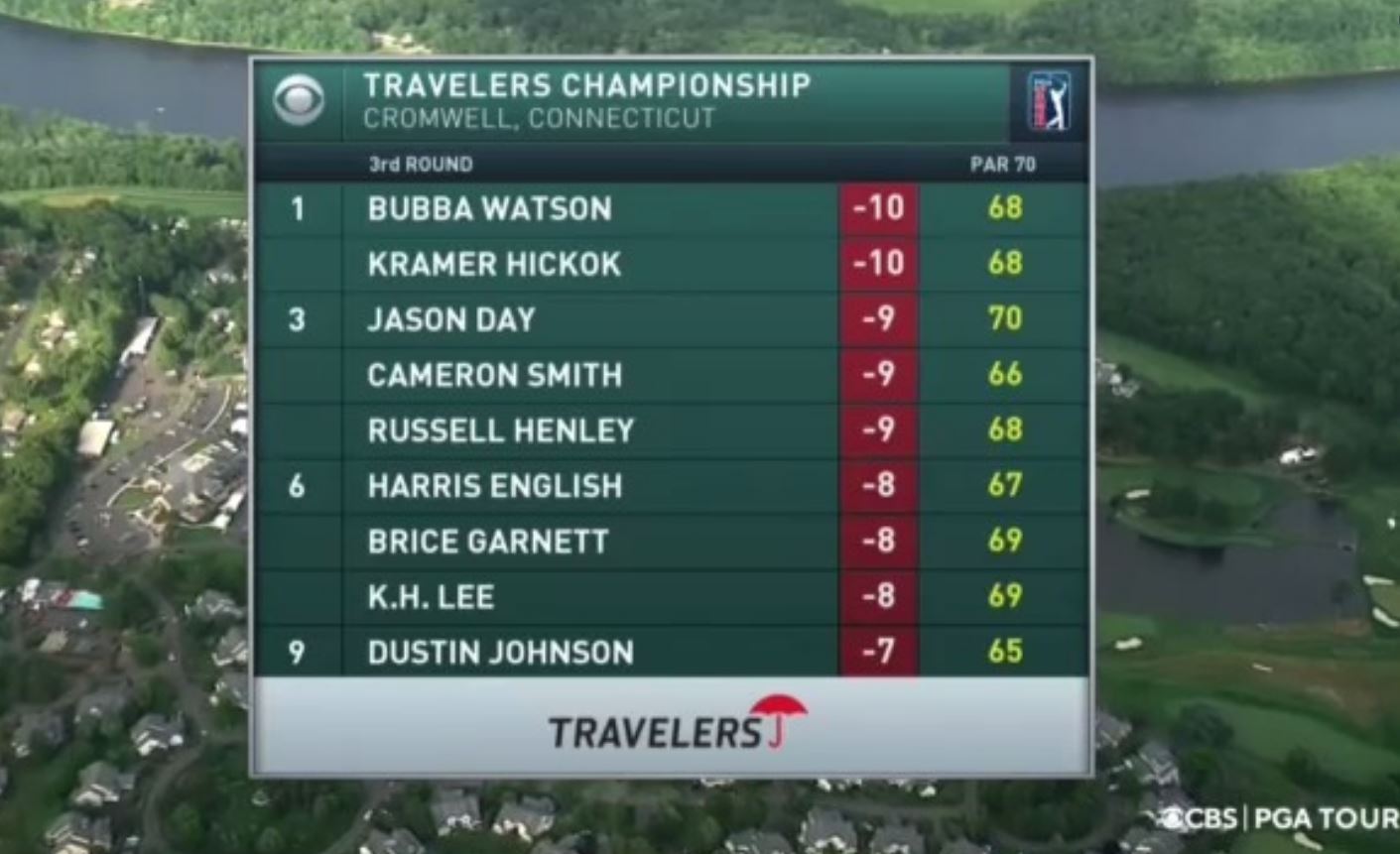 Watson is trying to join Hall of Famer Billy Casper for most tournament wins (four). Watson notched his first PGA Tour victory at River Highlands in 2010, won in another playoff in 2015 and prevailed by three strokes in 2018. At 42, a win Sunday would come at the same age when Casper won his No. 4 at Wethersfield Country Club in 1973.

Day (70), continuing to battle an ailing back, fellow Aussie Cameron Smith (66) and Russell Henley (68) are a stroke behind.

After making birdies on his final two holes and three of the last four to make the 138 cut on Friday, defending champion Dustin Johnson made the biggest move on Moving Day, carding six birdies in the last 12 holes in shooting a 65 that vaulted him 49 spots into a tie for ninth at 203.

“It was a little better, gave myself a lot of looks,” said Johnson, who is trying to join Hall of Famer Phil Mickelson as the only repeat winners in tournament history. “All in all, it was really solid. Drove it nice. Hit a lot of nice iron shots. … The finish was definitely good. I feel like I’m doing a lot of things really well. It’s just every time I feel like I make a mistake, it’s a bogey. When you’re playing well, you miss a shot, you’re grinding out the par. That’s just what I haven’t been doing lately, or making big numbers, which I don’t really do either. So it’s nice this week obviously playing solid. To birdie the last two yesterday to make the cut, which I definitely wanted to be here for the weekend, and obviously going out today and shooting a nice score, it was good. So I feel like the game is coming around.”

Mickelson, who like Johnson birdied his last two holes and three of four to make the cut, struggled most of the way 36while making five bogeys before sinking a 38-foot putt on the 18th hole for his third birdie and 72-210 that drew a thumbs-up and wry smile. Mickelson won the then Canon Greater Hartford Open in 2001-02 and the PGA Championship last month for his 45th career title that made him the oldest player (50, now 51) to capture a major championship.

“I just didn’t go low like wanted to, unfortunately,” DeChambeau said. “Still striking pretty well. Couple errant shot here and there. One-over on 15, even par on 2 (for the week) and didn’t make a birdie today on 9. Just feel like that would escalate me up to the top of the leaderboard if I do those things right. It’s just a little off still, but hopefully when everything comes together, I can win by a lot.”

DeChambeau figured he needed to shoot 7 or 8 under to win Sunday.