CROMWELL, Conn – Connecticut’s largest sporting event hopefully will continue its nearly seven-decade run as scheduled this year, but for the first time, it likely will be played without spectators.

The Travelers Championship will be the third tournament in the PGA Tour’s revised schedule announced Thursday, but, as of now, only players and other essential personnel will be allowed onto the TPC River Highlands in Cromwell premises on June 22-28 because of the COVID-19 pandemic. Tournament director Nathan Grube said a later date is not an option for an event that began in 1952 as the Insurance City Open at Wethersfield Country Club.

“It’s a unique world right now,” Andy Bessette, Executive Vice President and Chief Administrative Officer at Travelers, said in a teleconference call. “Everything feels so weird, so surreal. We draw hundreds of thousands of fans whom we love, it’s part of the ethos of who we are. Is it going to be strange? Yes, but given the lack of live sports right now, we’re fortunate, in a way, that golf isn’t played in an arena and we can abide by all the concerns of health and safety.

“It will feel empty, but we’re going to proceed. We’re fortunate golf is outside with fresh air. We’re not sure we have all the answers as to how yet, but we’re going to figure it out. We’re going to work with social media events with a goal of making everything as good and entertaining as possible.”

In the PGA Tour’s revamped schedule, the Travelers Championship is one of four TV-only events (CBS and The Golf Channel) as of Thursday. That could change depending on the COVID-19, which also will influence who can attend the tournament. As of now, it’s only players, caddies, tournament and club officials and a limited number of volunteers.

“We’ve been in an evolving situation for months, and we have been reaching out to our charity partners,” Grube said. “We’re committed to them and have always been creative, so we’re approaching this year with the same priority of getting as many charity dollars as possible.”

“The tournament is a big commercial for the region, so we’re looking at all options. We’re excited sports is back and golf is in position where it can take place. People have said they understand the TV-only situation. It will be different, but we’re embracing it.”

Grube said there has already been “a tremendous response” from sponsors, and officials continue to work with the PGA Tour and State of Connecticut as the world tries to deal with the COVID-19 that has shut down many areas, forcing sports such as golf, the NBA, NHL and Major League Baseball to drastically change their schedules.

“There have already been a lot of efforts with Gov. (Ned) Lamont and the Center for Disease Control,” Bessette said. “Safety is a priority where everyone feels comfortable, but this is the largest sporting event in Connecticut that is the pride of the state and we want to do everything possible to make it as much of a success as possible.”

Grube and Bessette aren’t sure what being the third event in the restart of the PGA Tour that has been silent since mid-March will have on the field. Early commitments have included Rory McIlroy, ranked No. 1 in the world, No. 4 Justin Thomas, T7 Patrick Cantlay, T7 Patrick Reed, No. 13 Bryson DeChambeau and Bubba Watson, who will try to tie Hall of Famer Billy Casper for most tournament wins (four). Chez Reavie is the defending champion after earning his first PGA Tour title in 11 years in 2019 with a four-stroke victory over Vermont native Keegan Bradley and Zach Sucher. 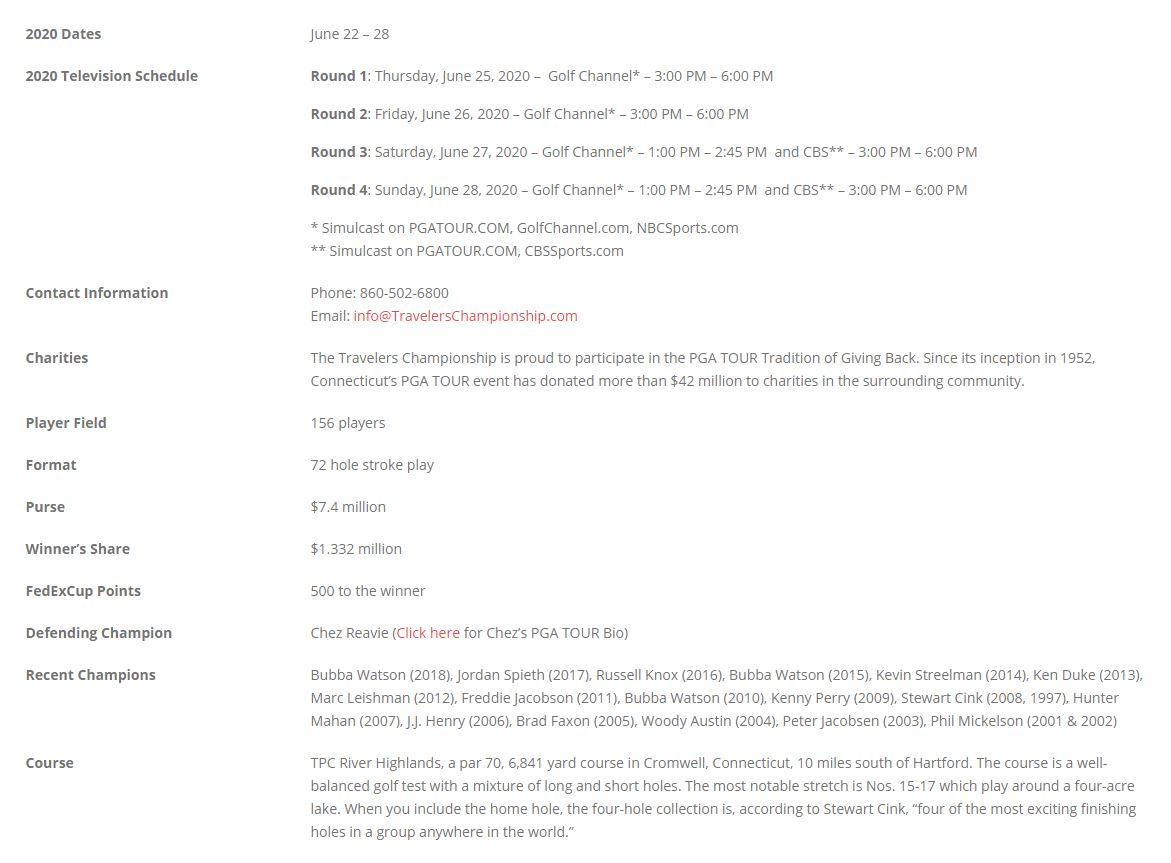 “Despite having a lot of different things thrown at us in the past, we’ve always had a good field,” Grube said. “We don’t know what we’re going to have this year, but we’re already off to a good start. The players want to get back and play and we’ve already got phone calls from them so we may have opportunities to get more good players. They’re still trying to figure it out, just like the rest of us, but I’m optimistic we’ll have a great field.”

Grube said the tournament is working on all aspects of the event through daily talks with the PGA Tour, including how the media will cover the event.

“The tournament is still two months away, so we don’t know how things such as social distancing and face masks will be then,” Bessette said. “We’re following all the rules, but we don’t know what they will be (in June). A month or two can make a difference, and we hope COVID-19 is a lot better in late June, but, again, safety is No. 1. We considered a limited number of fans, but conducting the tournament without crowds on-site is in the best interest of protecting everyone, including the Connecticut community at large.”

Grube said the tournament is exploring virtual options for special events such as Women’s Day with an eye toward creativity.

“There are so many people involved, not just the tournament and Travelers,” Bessette said. “The governor has been very supportive and everyone has been sharing information, so we’re looking forward to trying to celebrate as best we can.”

The tournament has raised more than $25 million for charity since Travelers became the title sponsor in 2007. That includes a record $2.1 million last year, a total that won’t be equaled barring a major change in the COVID-19 situation. Grube said he didn’t know if there would be any pro-ams since officials have been totally focused on safety, the competition and the broadcast.
“We have to make charities benefit and make sure we have financial stability that we can carry forward for the long term,” Bessette said.

“The sponsors have been good and said they will contribute to the tournament,” Grube said. “People are very committed and see this as just as a blip on the radar.”

Bessette said a portion of this year’s profits will go to the COVID-19 relief efforts. Fans interested in contributing to tournament charities can do so by visiting www.travelerschampionship.com. Those who purchased tournament tickets through Ticketmaster should automatically receive a full refund within 30 days.

“We’ll miss the energy that our fans bring to TPC River Highlands every year, but there’s no doubt we will feel the players’ excitement in our living rooms as we watch the tournament on CBS and the Golf Channel,” Bessette said, about one of the best-attended tournaments on the PGA Tour, with more than 200,000 attending every year. “The Travelers Championship has a way of connecting us all, and we’re focused on continuing to deliver a world-class event.”

“Most importantly, the Travelers Championship will continue to provide 100 percent of its net proceeds to charity, helping local nonprofits at a time when they need it most. We appreciate the ongoing support of the PGA Tour, the players, the media, additional tournament sponsors, our community and the fans. We thank everyone for their patience as we work through the details and will share additional updates as appropriate.”

The PGA Tour, which hasn’t played since The Players Championship was canceled after the first round on March 12, will resume with the Charles Schwab Challenge, originally scheduled for May 21-24, on June 11-14 at Colonial Country Club in Fort Worth, Texas. That was the original date for the RBC Canadian Open, which has been canceled.

The Tour had announced the back half of its reshuffled schedule in April, including three of its four major championships. Besides the U.S. Open, the PGA Championship was pushed back from May 14-17 to Aug. 6-9 at TPC Harding Park in San Francisco, and the Masters moved from April 9-12 to Nov. 12-15 at Augusta National Golf Club in Augusta, Ga. The British Open, scheduled for July 16-19 at Royal St. George’s Golf Club in Sandwich, Kent, England, was canceled, but players who had secured spots in the field as of April 6 will remain eligible for the 2021 tournament.
The Wyndham Championship on Aug. 13-16 at Sedgefield Country Club in Greensboro, N.C., will end the regular-season schedule and be followed by the three FedExCup playoff events that were pushed back to August. They will begin Aug. 13-16 with The Northern Trust at TPC Boston in Norton, Mass., followed by the BMW Championship at Olympia Fields (Ill.) Country Club and the Tour Championship at East Lake Golf Club in Atlanta, Ga.

The playoff finale will be followed by the U.S. Open, and then after a week off, the Ryder Cup between the United States and Europe will be played Sept. 25-27 at Whistling Straits in Kohler, Wisc.