BRATTLEBORO, Vermont – I doubt the VGA Vermont Amateur Championship on July 5-7 could have gone much better. Except for some rain the first day of competition the weather was delightful: not too hot, with mild humidity. Brattleboro Country Club was in superb shape, and many of the players were quick to praise the host club, director of golf Mike Zaranek, and superintendent Dave Evans, who also played the first two rounds.

Probably the only complaint was that there were no divot mix boxes on the par-3s. And that actually many have been more an observation than a complaint.

Since I play most of my rounds at Brattleboro CC it was fascinating to see how the course could be played by really good golfers. That most of the contestants were teeing off with irons from the back tee of the first hole was a bit of a strategic shock right out of the gate. But then most of the contestants were capable of hitting the ball a country mile, and there is that creek out there running across the fairway.

The VGA website kept up a live scoring page, as the players recorded their scores the first two days to on-course talliers after holes five and eleven. During the final, 36-hole day this was updated after each hole for the leaders.

Then there was the site’s course statistics page, endlessly fascinating for any numbers nerds, as it toted up the average score on each hole, the numbers of eagles, birdies, pars, bogeys, double bogeys and the dreaded “others.”

I noticed there had been an eagle on the thirteenth hole in the second round, and then it sunk in that the hole is a par-3, so that was an ace. It was scored by Harrison Digangi, playing out of the Dorset Field Club, right after he had run smack into consecutive triple bogeys on eleven and twelve. Harrison was on his way to a score of 17-over for his first two days, and missing the cut.

But, an ace? Golf in a nutshell — so much disaster, then total bliss.

Winner Jared Nelson fired the lowest round of the championship, 65, twice. Defending champion Bryson Richards carded a 66 in his second round, and third-place finisher Ryan Kohler shot 67 twice on his home course. They were the only three to have three rounds under par.

It was no surprise to the MOTO Research Team (the usual foursome) that the par-4 eleventh hole played the most difficult during the tournament. The old Wayne Stiles-designed hole is all uphill, making its 425 yards play even longer. And once on the green, the player is facing what is arguably the most difficult putting surface on the course, if not the state.

The eleventh played to an average of 4.86, and was the only hole through the four rounds to record more bogeys than pars, the fewest birdies, the most double bogeys, and the most “others.” 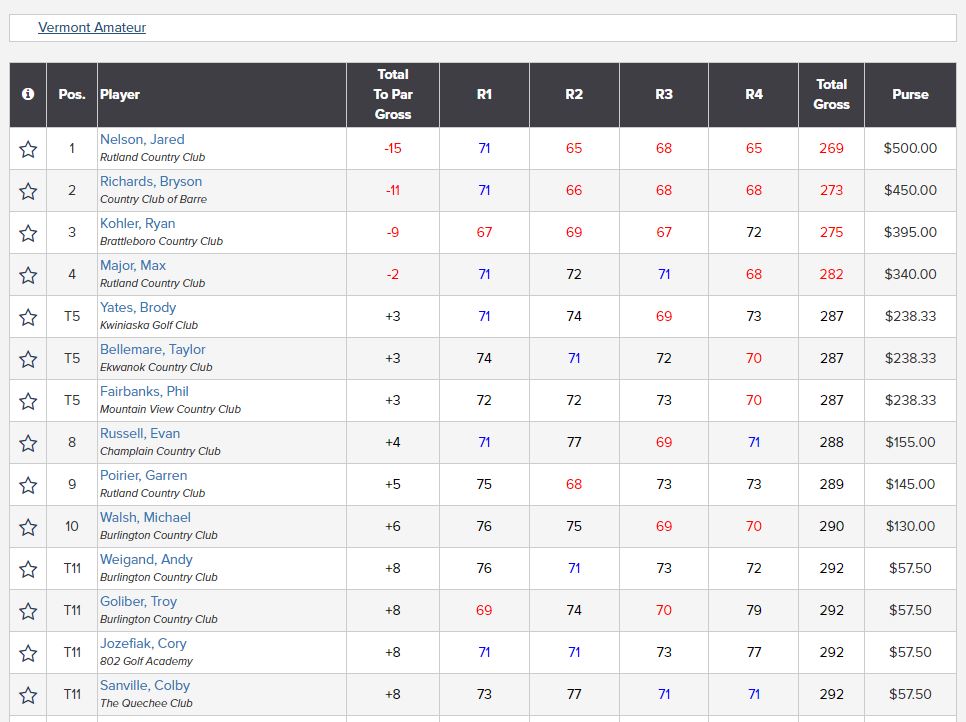 Nor was it a great surprise that the sixth hole played the easiest. When BCC expanded to 18 holes in 2000 designer Steve Durkee inserted the short par-4 to entice players off the tee, though he also inserted some cunning bunkers to bedevil those led into temptation. Still, the hole played to an average of 4.03, yielding the most birdies and four eagles, also the most.

It came as a bit of a surprise that the opening hole was the second most difficult for the players, the par-4, playing at 424 yards, averaging 4.68. Maybe they shouldn’t have hit so many irons off the first tee?

This was the 116th playing of the Vermont Amateur, making it one of oldest such state tournaments. The first was held at the Ekwanok Country Club in 1902. Thanks to the world wars, there were no competitions in 1918, 1942-45.

The first title was taken by an Ekwanok club member, Paul Waterman. Golf was still a fledgling sport in Vermont then—indeed, even by 1954 there were only six 18-hole tracks in the state, Ekwanok among them. Its members ruled for the first eight years of the tournament. Club member Fred Herreshoff won in 1904 at Rutland Country Club, and when he took the title in 1908, again at Rutland, was the first repeat winner.

A decent-sized crowd was following the last group around during Thursday’s final round July 7 and naturally most (or more likely all) of the Brattleboro CC members were pulling for their club champion, Ryan Kohler to prevail.

It was not to be, but Brattleboro has had its share of champions, most notably Shawn Baker. Robert Ratti won in 1959 and 1970, which also happens to be the record for the longest span between wins, eleven years.

Which brings us to the strange case of 1924, when J.G. Estey of Brattleboro won at Rutland. During one of the early days of this year’s competition I was idly looking over the list of past winners on the VGA website with my friend Jerry Carbone, who since his retirement as the Brooks Memorial Library director has generated a lively genealogy practice. The website showed the 1924 winner as “J.G. Etsey.” 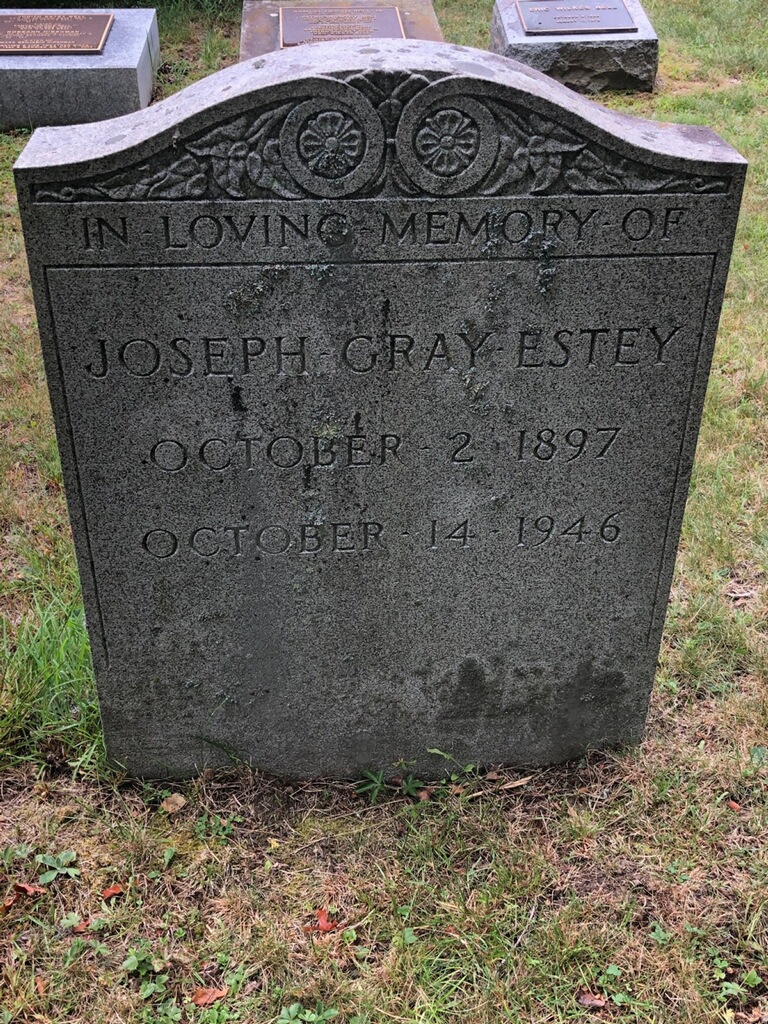 Assuming this was probably a member of Brattleboro CC’s famed organ-producing family I asked, “Is that the right spelling?”

“I don’t think so,” said Jerry. “Unless it’s a different family.” He knew right where to look, quickly pulling up a 1946 obituary of Joseph Gray Estey that confirmed he was both the fourth-generation member of the Estey Organ Co. family and the 1924 winner of the Vermont Amateur. So the website had it wrong.

Considering that we were then mere steps away from the Dave Pfannenstein Memorial Trophy with all the winners’ names etched on it, we wandered over and took a look through our reading glasses for 1924: J.G. Etsey. It was spelled wrong on the trophy, too!

We alerted some VGA staff to the discrepancy, and we were told that the trophy was not the original and that the names on it were taken from the website. Jerry wondered, “What do you think they’ll do about it?”

“Probably nothing,” was my guess, but I put in a call to the VGA and followed up with an email — no answer as yet. Jerry went to visit Estey’s grave the next day and said he heard sounds that sounded like something rolling over in it.

Well, it’s not the first sports trophy with clinkers. A recent piece in The New Yorker noted that the Stanley Cup “was lousy with them.” Apparently the New York Islanders are referred to once on the Stanley Cup as the ILANDERS, the Toronto Maple Leafs as the LEAES, and the Boston Bruins as the BQSTQN BRUINS.

To keep it in the golfing family, the Claret Jug sports a typo from 1947, listing the venue as Holylake instead of Hoylake. The day he was anointed the 2022 Champion Golfer of the Year, Cameron Smith, his name presumably engraved on it correctly, said he planned to see how many beers the Jug would hold. Sounds like the most reasonable approach!