Petrovic, who began the final round of the PGA Tour Champions’ Chubb Classic two strokes behind Langer, shot a 3-under-par 69 for a 54-hole total of 13-under 203 but finished behind Langer, who closed with 68 at Tiburon Golf Club in Naples, Fla.

Petrovic made his fourth and fifth birdies of the day at the 13th and 14th holes to get back within two strokes of Langer, who was playing behind in the final group. But Petrovic failed to birdie the reachable par-5 15th hole, and when Langer then made 4, he had a three-stroke lead with three holes to go. Langer made only his second bogey at the 17th hole, but Petrovic failed to make at least a birdie on the par-5 18th and had to settle for yet another near miss. Langer birdied the final hole to clinch the victory.

“It’s the first event of the year, so I really didn’t know what to expect,” Petrovic said. “I felt good, but I had some new Tour Edge irons and was hitting them great, but you don’t know until you get on the golf course. I was really solid all around and putted really well the first two days. I left a couple out there (Sunday), and I think that was the difference on the front nine. It kind of took the wind out of the round, but I battled back again and kept hammering away and giving myself chances.

“Overall, I’m happy. I’m obviously disappointed I didn’t get the victory, but I think I got to just look at the positives. Just fell a couple shots short.”
Petrovic continued to marvel about Langer. 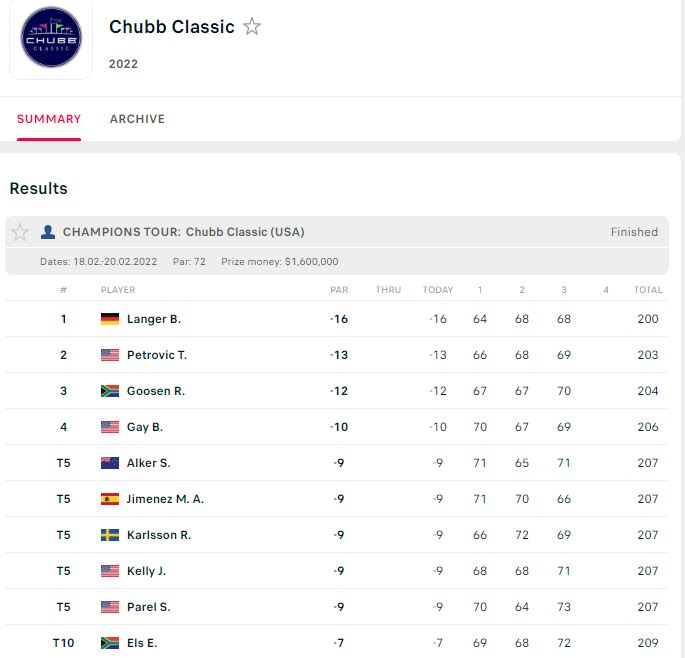 “He shot his age again this week, which is unbelievable,” Petrovic said. “Obviously he’s comfortable winning, but he’s just efficient in everything he does. Working out, eating, drinking, practicing. He’s not that way because he’s 64. I think he’s been that way his whole life. I wish we had heart monitors on us out there. I want to know what his heartbeat is coming down the stretch, probably half of what we are. He just somehow gets himself calmed and always has a routine. I think that’s important, stay in your routine.”

It was Petrovic’s 10th Champions Tour runner-up finish without a win. He had one victory on the PGA Tour in the 2005 Zurich Classic at New Orleans after capturing the 1986 New England Amateur and 1988 Connecticut State Golf Association Amateur Championship.

Petrovic is a 1988 graduate of the University of Hartford, where he was a four-time All-New England selection and played with future PGA Tour competitors Jerry Kelly and Patrick Sheehan, who was born in Providence, R.I. He earned more than $12 million on the PGA Tour, including over $1.7 million in 2003 and 2005, then joined the PGA Tour Champions after turning 50 in 2016.

Petrovic, who now lives in Austin, Texas, was inducted into the University of Hartford Hall of Fame and Connecticut Golf Hall of Fame. He once worked as a pizza maker and delivery man in Tampa, Fla., while struggling to survive in the pro ranks. He worked with his wife, Julie, and the couple formed For Every Child, Inc., a charity with a mission to provide needy children with basic necessities lacking in their lives. Its website is www.hopetotes.org.

Langer, 64, hit an astonishing 39 of 42 fairways as he recorded his record fourth Chubb Classic victory and 43rd overall, two behind all-time leader Hale Irwin. It was his third wire-to-wire win in the tournament and the 16th consecutive season that the personable, low-key German captured a title.

“It was good all week,” said Langer, who shot his age in the first round. “I had a terrible three-putt at the first hole, but I gathered myself and made some birdies. … I’m getting close now (to Irwin). Years ago, I thought, ‘Well, that’s almost impossible to reach that.’ Looking back now, I’ve lost a bunch of playoffs the last three or four years. If I had won a couple of those, I would be right there.”

Fellow Hall of Famer Retief Goosen shot 70 to finish third at 204. Kelly tied for fifth at 207 after a closing 71. Rhode Island native Billy Andrade shot 75 to share 24th at 214, one ahead of rookie Rob Labritz (70), who graduated from Central Connecticut State University in his native New Britain.

“I played solid, and I’m excited to go into my next Tucson event next week,” Labritz said of his PGA Tour Champions debut. “We’ll tighten up the shots and putting a little bit, but any time I’m under par for three rounds, I’m excited.The whole experience lived up to my dreams. I got to play with all sorts of great players and got to meet a bunch of guys. It was so fun being out here, and my game is showing some promise, so we’re be trucking away and are going to go have our first victory soon.”