BOSTON, Mass – The dream pairing of Tiger Woods and Phil Mickelson paired together in the first two rounds of the U.S. Open will not happen.

It’s official. Tiger Woods has withdrawn from the third major of the year scheduled June 16-19 at the Country Club in Brookline.

To the disappointment of sports fans everywhere, Woods posted a statement on his Twitter account explaining his decision to WD, opting to instead give his surgically rebuilt right leg added time to rest ahead of the 150th Open Championship at St. Andrews July 15-17. 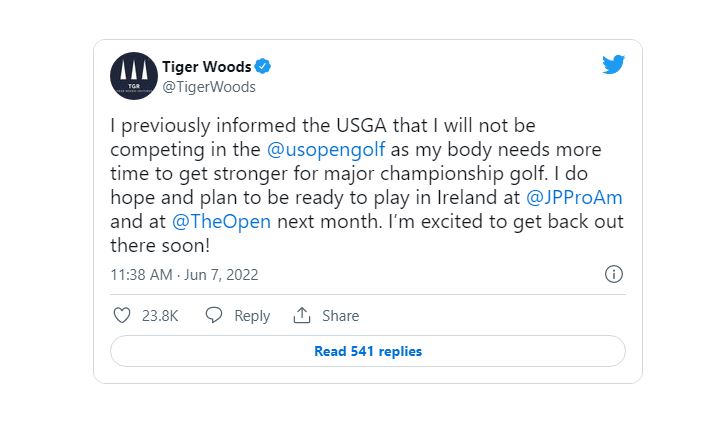 Woods sustained traumatic injuries in a car accident in February 2021 and returned to competition with a 47th-place finish at the Masters in April, where he opened with 71-73 but faded considerably over the weekend. Woods said prior to last month’s PGA Championship that his leg had gotten stronger since Augusta and that he was optimistic about his chances. He said, “It’s only going to keep getting stronger” before teeing off in the the PGA Championship where he made the cut at with a gutsy second-round 69 only to withdraw after a third-round 79. He walked noticeably slow and gingerly the entire week.

Woods is a three-time U.S. Open champion (2000, 2002 and 2008) but has struggled in recent U.S. Opens, which tend to reward length and accuracy rather than creativity and guile. He has missed the cut in three of his last four U.S. Open starts and does not have a top-10 since 2010.

Woods, a 15-time majors winner, last appeared at The Country Club in the 1999 Ryder Cup, where he went 1-3-1 and no known special affinity for the course. On the other hand, Woods has captured two Opens at the Old Course and says its his favorite course to play.