BOSTON, Mass – While professional golf continues its pandemic ‘pause’ it’s still Exhibition Golf Sunday with another star powered, made for TV golf television event. One week after the TaylorMade Driving Relief drew very nice television ratings, four of the most powerful names in all of sports team up for Capital One’s The Match – Champions for Charity from Medalist Golf Club in Hobe Sound, Florida.

Tiger Woods will team up with Peyton Manning to play a match against Phil Mickelson and Tom Brady. The Front Nine format will be best-ball (best score of each duo counts for the team score), while the Back Nine will be modified alternate shot. Under this format, all competitors will tee off and each team will pick which drive they’d like to hit their second shot from. After deciding, the remainder of the hole is alternate shot. In addition, there will be a one club challenge on Hole No. 5.

It hasn’t yet been confirmed what tees Peyton and Brady will be using, or if they’ll be getting strokes for the best ball portion. One would assume that both will be playing from shorter tees than Tiger and Phil, and that they’ll both be receiving strokes on certain holes depending on their handicap.

In terms of the pairings, each side is well balanced. Not in terms of skill sets but in terms of personality. Both Phil and Peyton are known to be pretty witty guys who often provide great soundbites for the cameras and aren’t afraid to bust chops at all. Meanwhile, Tiger and Tom Brady carry themselves through life like they’re aliens who try to speak and act in ways they perceive humans would do in their daily lives. By pairing Peyton with Tiger and Phil with Brady, each team possesses a yin to their yang.

Unlike the last highly touted showdown between Tiger and Phil, viewers won’t have to pay for this one. It’ll be broadcast across most Turner stations (TNT, TBS, etc.) at 2:00 on Sunday afternoon. Ernie Johnson, Trevor Immelmann and Charles Barkley will provide the play by play, while PGA Tour star and Medalist member Justin Thomas will serve as the on-course reporter.

The additions of Charles Barkley and Justin Thomas to the coverage should keep it very lively for the viewer. One of the complaints about the production of the first Match was how dry and dull it was. Barkley is a loose cannon in the booth and will keep it light, while Justin Thomas is a pretty easy going talker himself and won’t be shy to rib any of the competitors on the course.

Pete Dye and Greg Norman teamed up in the early 1990’s to construct a new golf course near Jupiter, FL, and in January 1995 their creation Medalist Golf Club opened for membership in nearby Hobe Sound. Over the years, Greg Norman (who does not have the best reputation in the golf architecture game) tinkered with the course to take away most of the classic Pete Dye flavoring for his own flair for golf design. This ruffled the feathers of members a bit as the club’s reputation began to slip. 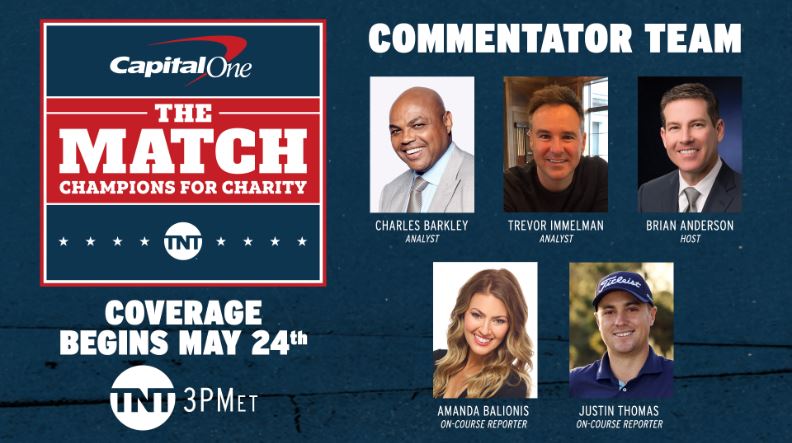 In 2012, the board of members informed Greg Norman that they were looking to restore the golf course to the original design, but they were not going to utilize him to do it. Instead, they opted for Pete Dye disciple Bobby Weed (most known for places like TPC Summerlin, TPC River Highlands and Michael Jordan’s brand new Grove XXIII club also in Hobe Sound) to handle the restoration. This did not sit well with Greg Norman, who penned some very sternly worded letters to the club expressing his disproval. Nevertheless, the club went ahead with the Bobby Weed restoration, and the golf course has been taken back to its original roots.

Most of the changes to the golf course involved reconstructed bunkering, mainly to both reshape and reposition them to their original placements from the Pete Dye design. In addition, Greg Norman had added numerous frontside bunkers which made the golf course very challenging. These were mostly removed from play to make it a little friendlier for the amateur.

From the championship tees, the golf course is just a little over 7,200 yards, however in the renovation Bobby Weed introduced a new set of tees called “The Tiger Tees” in honor of the club’s most famous member – Tiger Woods. From these tees, the golf course is stretched to over 7,500 yards long and it’s a set of tees Tiger uses to prepare for the Masters. It also was used for Tiger to record his infamous “Worst Ball 66” back in 2015, which got all his mouth breathing and typically non-golf fans all hot and bothered while claiming he was “back” (Tiger would later go on to have the worst year of his career and succumb to two back surgeries before getting back on track).

Overall, Medalist is a very well-conditioned and straight forward test for any professional or low handicap player. The fairways are generously spacious to allow a player easy access to the short grass for great opportunities to fire at pins. But for anyone who has trouble getting off the tee they’ll be in for a long day. Any tee shots that don’t hit the fairway has very little room for error. Only a small patch of waste area stands in the way of balls flying into marshes and heavily wooded swampland, where they could either choose to find their ball among all the alligators and snakes or reach into their pocket for a provisional.

Restoring the golf course to its original Pete Dye roots still presents some challenges for any golfer who plays there. For Tiger and Phil, as long as they bring their B game they should be fine. For Peyton and Brady, however, they could be in for a long day depending on which side of their mid-handicap coin shows up to the first tee.

The course record at Medalist is 62, held by both Tiger Woods and Rickie Fowler.

All golf fans are familiar with the current form of Tiger Woods and Phil Mickelson. Besides for Mickelson’s erratic driving and Tiger Woods’ ticking time-bomb of a back, fans have very few questions about how they’ll perform on Sunday.

But what about Peyton Manning and Tom Brady? Besides cut up highlights from their days competing in celebrity pro-ams or a cameo on Entourage, their skill set is pretty unknown to the average viewer.

Here’s a breakdown of the game of both amateurs for this event:

Tom Brady maintains what’s known as a “vanity handicap” and he’s not nearly as good as his index suggests. Given how much effort he takes to present himself as the epitome of perfection, whether it be through his eating habits or public persona, it would make all the sense in the world if he’s not confident enough to post a score as bad as it truly was. For him, being an 8 handicap is an acceptable lower limit to the type of golfer he perceives himself as being.

Peyton Manning driver swing looks pretty good. He does a great job getting good body rotation on the back swing, keeps his body behind the ball through impact, does a nice job squaring up the club face and driving hard to his left side after impact. He might have a few duck hooks in his arsenal with how strong his grip is and how shut his club face is at the top of his back swing, and he might do good to maybe shorten up the swing a bit at the top. But overall on video he strikes me as a confident player over the ball who has a one way miss.

What’s to question is his handicap, which currently sits at 6.4. This is inconsistent with most current reporting of his handicap, which up until recently was reported to be a 3.5. You would think now that his football career is over and he’s golfing more he should be getting better or maintaining that index, not faring 3 strokes worse.