HARTFORD, Conn. – Watching Tiger Woods get inducted into the World Golf Hall of Fame harkened me back to one of the most memorable days of my 50-plus years golf writing career.

Twenty-five years ago, Woods did a junior clinic at Brooklawn Country Club in Fairfield, and his then legal counsel, John Merchant, the first African-American on the U.S. Golf Association executive committee, invited me to attend. As Tiger hit balls adjacent the 17th hole with his late father Earl Woods describing what his son was doing, the parents and youngsters among the 75 lucky enough to be on hand were encouraged to ask questions.

After the fourth question, a mighty brave mother said, “Mr. Woods, do you think you could let Tiger answer some questions?”

I had to bite my lip to keep from bursting out laughing, but Tiger did offer some answers. 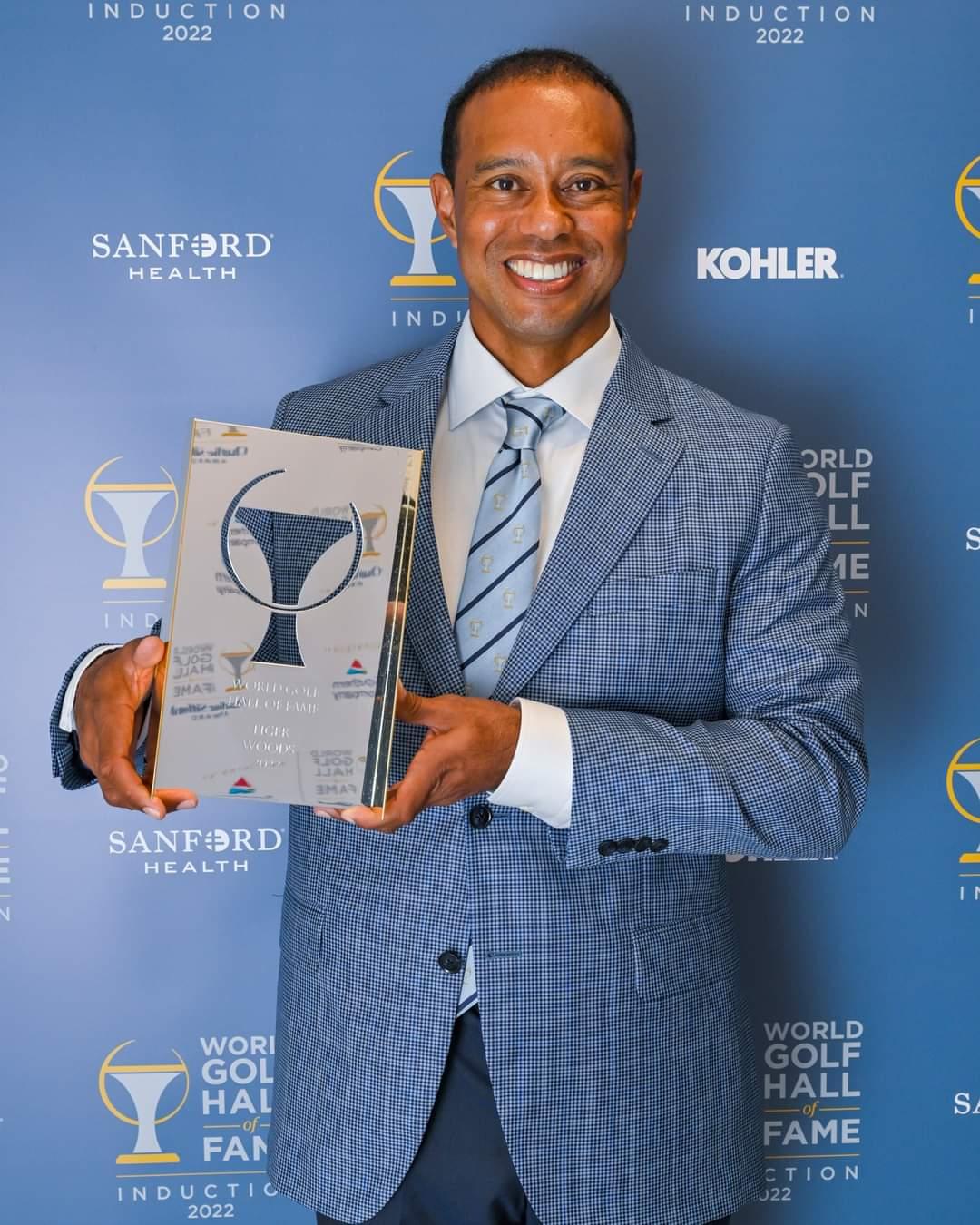 After Tiger finished hitting balls, he sat in the Brooklawn clubhouse and signed dozens of autographs with one person sitting alongside – ME. I had a one-on-one with a future Hall of Famer for 30 minutes and then adjourned to the clubhouse porch to have a picture taken with Tiger and Merchant. A framed photo of Tiger and I (Merchant was cropped out) sits in my family room so anyone who visits can see how fortunate that I was on that memorable day.

We then headed for the nearby Country Club of Fairfield, where Tiger and his father were to have lunch with potential investors. Tiger then was to play with several high rollers, and I thought I’d watch him for a few holes and then write my story for The Hartford Courant.

Suddenly, the game plan changed dramatically. One group was short a player, and someone running the tournament asked if I wanted to fill the spot. I said I could play a few holes but had a story to write. That plan also quickly changed. After I made an eagle and two birdies in the first seven holes of a shotgun start, we were at the turn.

“No way you’re leaving now,” one of my new golfing “friends” insisted.

I stayed, and our team ended up winning the tournament and received prizes from Tiger.

That was the good news. The bad news was I hadn’t written a word from my exclusive interview. Since I was more than an hour from home, I was in a pickle because I’d be hard-pressed to make the deadline for my story if I had to drive home and then start writing. I asked the pro if there was a room that I could use to write and file my story. Fortunately, he was nice enough to allow me to use his office and asked that I just lock the door as I left.

I made my deadline, and my bosses never knew why and how I was able to do it.
To this day, I feel so lucky to have been the golf writer at The Courant during much of Tiger’s spectacular run of success. My wife and I were at Augusta National in 1997 when Tiger won his first of five Masters by a record 12 strokes and became the first African-American or Asian to capture a major championship at 21. Three years later, we were at Pebble Beach Golf Links in California when Tiger won the 100th U.S. Open by a record 15 shots, and Ernie Els, who tied for second, said, “Tiger plays a game that the rest of us aren’t familiar with.”

The record-setting margins of victory are two of Tiger’s litany of achievements that are simply mind-boggling. Though many rank as unfathomable, my favorite is he made 142 consecutive cuts from Feb. 5, 1998 at the Buick Invitational to May 8, 2005 in the Wachovia Championship, finally missing a week later in the EDS Byron Nelson Championship. The second-longest streak is 113 by Nelson from the Bing Crosby National Pro-Am on Jan. 26, 1941, through the Colonial National Invitational on May 27-30, 1948. Jack Nicklaus is the only other golfer to make it through at least 100 events with 105 made cuts.

Tiger and his foundation have raised tens of millions of dollars for charity, which was duly noted during his Hall of Fame introduction. He also helped me and my staff raise nearly $100,000 for the Bo Kolinsky Scholarship Fund. Bo was my best friend and a colleague at The Hartford Courant until his sudden death by heart attack two weeks after his 49th birthday. His widow, Jill, and I chaired a benefit tournament run by the Connecticut Sports Writers Alliance in honor of Bo, the Courant’s scholastic sports editor with whom I covered more than 20 PGA Tour events in Connecticut. Our major raffle prize every year was a Buick golf bag signed by Tiger that I received from Larry Peck, marketing manager for Buick Golf, one of Tiger’s major sponsors and the title sponsor for the local PGA Tour event, now the Travelers Championship.

In keeping with the Woods tradition, his 14-year-old daughter, Sam, gave a thoughtful, touching and entertaining six-minute speech presenting her dad for induction. Appropriately, Sam wore a red dress, the color of the shirt that Tiger always wore on Sunday, and revealed what dad preached to her and 12-year-old brother Charlie: “Train hard, fight easy.”

Sam related how Tiger was still wearing his Sunday red after finishing second in the 2007 U.S. Open at Oakmont in Pennsylvania. After rushing to the airport and flying to Orlando, then driving to the Winnie Palmer Hospital, Sam was born within five minutes of his arrival.

“He may have lost that day, but he won the greatest gift of all,” a smiling Sam said to more applause. “I realized while writing this speech that, no matter what life throws our way, we somehow come out together and stronger. You know, ‘train hard, fight easy.’ ”

Sam also spoke about her father’s recovery from a single-car accident 13 months ago that nearly took his life or at least part of his right leg.

“About a year ago you were stuck in a hospital bed at one of your ultimate lows and one of the scariest moments of your life and ours,” Sam said. “We didn’t know if you’d come home with two legs or not. Now not only are you about to be inducted into the Hall of Fame, but you’re standing here on your own two feet. This is why you deserve this; because you’re a fighter.”

After receiving a standing ovation that was longer and louder than the other three inductees and three special award recipients as he walked onto the stage, Tiger gave Sam a hug and a kiss before a reflective 17-minute speech that included his outlook on golf and life and prejudice that he faced growing up in California, where he learned to play from his father. One story was about going to a country club to play a tournament and not being allowed in the clubhouse like the other juniors because of the color of his skin.

“So I was denied access into the clubhouses. That’s fine. Put my shoes on here in the parking lot,” he recalled. “I asked two questions only, that was it. Where was the first tee, and what was the course record? Not complicated.”

The room at the PGA Tour Global Home in Ponte Vedra, Fla., which only held about 500 people, burst into applause from his children, mother Kultida, longtime girlfriend Erica Herman and about a dozen players who were to play in The Players Championship, including past Travelers Championship winners Bubba Watson and Jordan Spieth. There also were 27 past Hall of Fame inductees in attendance, and Jack Nicklaus, Tom Brady, Annika Sorenstam, Serena Williams, Jerry Rice and Michael Phelps offered video tributes.

Despite being the greatest of his generation by far, once winning seven of 11 major championships, Woods never touched on any of his record-tying 82 PGA Tour victories, including 15 majors, or the eight surgeries that he endured along the way. He stressed his passion to play and a work ethic that made him feel as if he earned it. He spoke of his parents taking out a second mortgage that enabled him to play the junior circuit in California and paying it back the day he turned pro and signed lucrative deals with Nike and Titleist. More applause.

Tiger gave his entire speech without notes and fought back tears as he talked about what his father, mother and two children had meant to him, including special support after the serious car accident. Sam mentioned her father’s miraculous comeback from the injury that included he and Charlie finishing second to John Daly and his son John II in his return to competition in the PNC Championship teaming a parent and child at the Ritz-Carlton Golf Club at Grande Lakes in Orlando.

The two-hour ceremony ended with Tiger’s induction, and he finished his remarks saying it was an individual award that was the result of a team effort.

“You have to understand, I got to this position because of my upbringing, having two unbelievable parents, but I didn’t get here alone,” Woods said. “I know that golf is an individual sport. We do things on our own a lot for hours on end, but in my case, I didn’t get here alone. I had unbelievable parents, mentors, friends, who allowed me and supported me in the toughest times, the darkest of times, and celebrated the highest of times.”

I couldn’t help but think back to that day in Fairfield that I was fortunate to spend time with a major champion in so many ways. I also had dealings with two of the other inductees, former PGA Tour commissioner Tim Finchem and three-time U.S. Women’s Open champion Susie Maxwell Berning, whom I covered when the LPGA Tour made a few visits to the former Heritage Village Country Club in Southbury. Visionary and trailblazer Marion Hollins was inducted posthumously.

During her induction speech, the 80-year-old Maxwell Berning addressed Woods.

Tiger offered his familiar toothy smile throughout. I was smiling, too.