HARTFORD, Conn – Tiger Woods struggled with his game and health since his stunning victory in the Masters in April.

Lingering back problems limited Woods to six tournaments the last four months, and he missed the cut in two major championships. When he failed to finish solo 11th or better in the BMW Championship on Sunday (he tied for 37th at 7-under-par 281), he failed to qualify for this week’s season-ending Tour Championship, which he dramatically won a year ago for his first title in five years as exuberant galleries famously filled in behind him on the 18th fairway.

Woods finished this season 13th in the U.S. Presidents Cup Team race, with the top eight earning automatic berths to face the International side Dec. 12-15 at The Royal Melbourne Golf Club in Melbourne, Australia. The eight are all inside the Top 20 in the Official World Golf Ranking and have combined for 11 PGA Tour victories this season.

The qualifiers are led by No. 1-ranked Brooks Koepka, who repeated in the PGA Championship and finished second in the Masters and U.S. Open this year. Koepka, the 2018 PGA Tour Player of the Year, was followed by Justin Thomas, who won the BMW Championship, Dustin Johnson, Patrick Cantlay, Xander Schauffele, Webb Simpson, Matt Kuchar and Bryson DeChambeau. Kuchar is the most experienced with five appearances, while Cantlay, Schauffele and DeChambeau will be making their tournament debuts.

Kuchar, Simpson, and Johnson played on the 2011 U.S. team that won at The Royal Melbourne Golf Club, while Koepka, Johnson, Kuchar and Thomas were on the victorious U.S. Team in 2017 at Liberty National Golf Club in Jersey City, N.J. That victory gave the U.S. an 8-1-1 lead in the biennial competition.

“This is the core of the team,” captain Woods said. “These guys have earned it. They’ve proven that they belong on the team. You’ve got some veterans, whether it’s Webby, Kuch or Dustin, who have been part of the teams for a very long time, and we have some newcomers. We have a nice mix.

“It’s a younger team, and that’s what we want to see. We want to see a little turnover and get the younger guys playing on these teams because they’re going to be a part of it for a very long time going forward. Really, I can’t wait to get some of these young guys down to Royal Melbourne to experience golf in the Sandbelt Region and get to experience how much the fans love and appreciate sports and golf in that area of the world.” 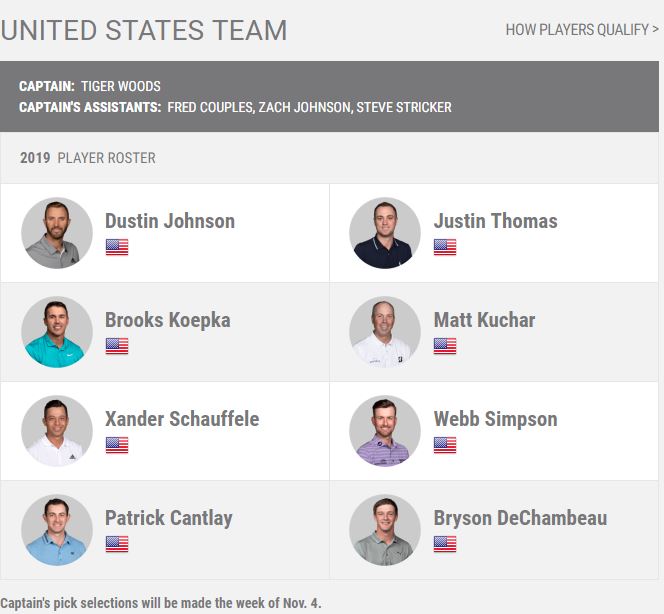 As captain, Woods has four selections to fill out the team the week of Nov. 5, and he has to feel in a quandary about picking himself. Tony Finau, U.S. Open champion Gary Woodland, Rickie Fowler and Patrick Reed, all solid players with a variety of strengths, were ninth through 12th in the final standings, so Woods would have to bypass one of them in order to play.
Woods, ranked sixth in the world, was initially disappointed that he won’t be at East Lake Golf Club in suburban Atlanta this week.

“Last year culminated in a pretty special moment for me and it would’ve been nice to go back there,” Woods said, “but I’ll be watching the guys on TV.”

But the 2018-19 season still left Woods with a smile on his face. A return to major championship glory at the Masters – something golf fans feared they might never witness again – overrode any frustration with his consistency and reduced playing time as he tried to manage his health after numerous back and knee surgeries.

“Very special to win my 15th major and get my fifth jacket,” Woods said. “Those are special moments. … The rest of the tournaments I didn’t really play as well as I wanted to, but at the end of the day, I’m the one with the green jacket.”

But Woods needed to finish in the Top 30 in the FedExCup points race to advance to East Lake, but he came up seven spots short. Now he won’t be able to defend one of 81 PGA Tour titles for the 16th time in his career for a variety of reasons.

“Little bit frustrating,” said Woods, who is one win shy of Sam Snead’s career record. “I didn’t have the short game I needed to make a run. I made too many bogeys around the greens. … The short game was most disappointing. I wasn’t very good.”

Woods ranked 64th (in the 69-man field) in Strokes Gained: Around the Green. He was 2-of-8 in sand saves and 17-of-26 in scrambling. Considering Woods had played only three competitive rounds in the previous eight weeks, he was asked if the short game issues were a reflection of his lack of playing time.

“I don’t know if it’s reps or not,” Woods said. “I didn’t have a feel for what I needed to do this week. I struggled out of the bunkers this week, especially (Sunday). … I misjudged the sand. Some were hard, some had some softness to it. I thought the rain would have made them all pretty firm, but I had a hard time getting the feel for it, for sure.”

Woods now plans to focus on improving his fitness after saying he needs to get “a little bit stronger in certain body parts.” He plans to play in the new 78-player Zozo Championship in Japan on Oct. 25-28, and he’ll be keeping close tabs on those who were close to automatically qualifying for his team so he and his assistants can make the best choices. 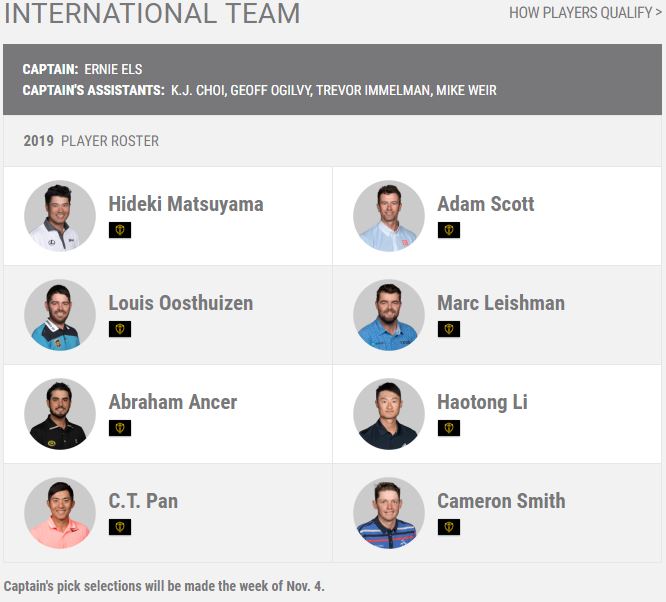 “I’m excited to have the team locked in,” Woods said. “This is going to be our core of the team and can’t wait to reach out to all of them.”

Woods also will continue pushing for progress on the Jackson Park/South Shore plan spearheaded by NBC/Golf Channel analyst Mark Rolfing. Significant political hurdles remain on a project that could bring a top-notch course and PGA Tour event to Chicago’s South Side. Woods’ TGR Design is the lead architect.

“This is as good as I could have asked for,” Els said. “I’ve got guys who have played in the Presidents Cup many times previously, and I’ve got guys who are rookies. The guys who are pillars of our team have really stepped up to take their places in this team. I’m really impressed with how they’ve conducted themselves and played into the team.

“For the top eight, I think the one-year qualifying cycle has worked out. The guys knew they had to play well this season, and they showed it. For instance, Adam Scott played himself right onto this team. He was nowhere near when qualifying started, and he’s played great since we started. Same with Louis Oosthuizen who stepped it up. They obviously had a plan of trying to make the team.”

Players who just missed qualifying were Jason Day of Australia, Jazz Janewattananond of Thailand, Sungjae Im of South Korea and Justin Harding of South Africa. Els will make his four captain’s picks the week of Nov. 4.