HARTFORD, Conn. – Virtually anything involving Tiger Woods has a special feel and air about it.

So it was again Thursday night as Woods announced his four captain’s picks for the United States team that will challenge the International side in the Presidents Cup on Dec. 12-15 at Royal Melbourne Golf Club in Victoria, Australia.

After naming Tony Finau, Patrick Reed and reigning U.S. Open champion and close friend Gary Woodland as his first three selections, Woods went into an unusual mode for anyone who has ever captained a team in an international competition as he filled out his 12-man team.

“He’s made, what, nine Cups and he’s played in Australia twice in the Presidents Cup, so this will be his third appearance as a player,” Woods said before chuckling. “I find it interesting talking in the third person.”

But nothing is surprising when it comes to the man who has been No. 1 in the Official World Golf Rankings a record 683 weeks. Despite an emotional win in the Masters in April, Woods found himself on the outside looking in as a Presidents Cup automatic thanks largely to missing cuts in the PGA Championship and British Open due to a left knee that seems perpetually hurting. But a fifth surgery on the knee to repair some cartilage enabled Woods to rotate better and take pressure off his often-injured back.

But before Tiger even headed to the inaugural ZOZO CHAMPIONSHIP, the first PGA Tour event in Japan, vice captains Jim Furyk, Zach Johnson and especially Fred Couples tried to strongarm Woods to put himself on the team.

“They said, ‘You’re on the team, you’re playing,’ ” Woods said with a wry smile. “I said, ‘Hold on, slow your roll. I’m coming off of knee surgery. I don’t know how it’s going to be. Let me have Japan to test it and feel it out and figure it out.’

“Freddie was pretty ardent. ‘You’re on the team. Quit being stupid.’ I said, ‘No, hold on. I’ve haven’t swung a club yet. Let me rehab this knee and get it going. Give me Japan, and I’ll get back to you. Well, I got back to him after Japan.”

Fred, Jim, Zach and the rest of the golf world got their wish when, after nine weeks off, Woods again demonstrated his career was far from over. Despite bogeying the first three holes to start the ZOZO CHAMPIONSHIP, Woods led wire-to-wire, shooting 19-under-par 261, tying the third-lowest 72-hole score of his career, to beat hometown hero Hideki Matsuyama by three strokes for his 82nd PGA Tour victor. That tied Sam Snead and LPGA Hall of Famer Mickey Wright for second-most wins in pro golf and moved Woods within six of leader Kathy Whitworth, who lived in Connecticut for several years while compiling 88 victories from 1962 to 1985, the same time span for Woods on the PGA Tour.

Woods, Woodland, Reed and Finau joined automatic qualifiers (in order) Brooks Koepka, Justin Thomas, Dustin Johnson, Patrick Cantlay, Xander Schauffele, Webb Simpson, Matt Kuchar and Bryson DeChambeau. Koepka might not be able to play after undergoing stem-cell treatment to repair a partially torn patella in his left knee sustained at the C.J. Cup at Nine Bridges in Korea on Aug. 26, forcing him to withdraw from the World Golf Championship-HSBC Champions in China. It’s the same knee that prevented Koepka from practicing for long stretches last season.

If Koepka can’t play, Woods has until the day before the Presidents Cup begins to name a replacement, but he would likely do it well before then because the event is so far from the United States.

Distance partially helped Woods determine if he would do more than just ride around in a golf cart with a walkie-talkie, offer encouragement and comprise lineups with his vice captains and input from his players in Australia. It was about 7,500 miles from Florida to Tokyo for the ZOZO CHAMPIONSHIP, and it’s nearly 10,000 miles to Melbourne from Albany, Bahamas, where Woods will host the 18-man Hero World Challenge the week before the Presidents Cup.

Woods insisted it was a far cry from a year ago when he notched a memorable victory in the Tour Championship, his first in five years, and immediately hopped on a plane to Paris to play in the Ryder Cup. He was visibly tired at Le Golf National as he lost all four matches that he played, including 2 and 1 to Jon Rahm in singles.

“I think the emotional stress and the emotional release of finally winning an event coming back from my back surgery, that took a toll on me a bit,” Woods said. “So this is a totally different animal. I’m playing in the Hero World Challenge, not a Tour event, even though we have the World Rankings points. It’s a very easy week. I do have some duties there, but overall, it’s a very easy week. And then our flight down to Oz will be easy, just long.”

Woods said he hasn’t given specific thought to his partner(s), having discussed the possibility with his assistants and some of the players. Of course, he wouldn’t reveal a specific name.

“It’s one of the other 11 players,” a smiling Woods said coyly. 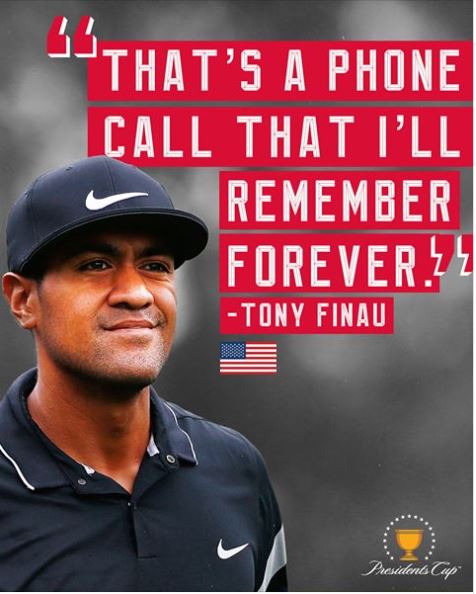 Woods said he wasn’t sure how many matches that he would play, but competing in three would give him 27 in the Presidents Cup, surpassing Phil Mickelson for the all-time record. Mickelson, a five-time major champion and the only repeat winner in Travelers Championship history, made a record 24 consecutive appearances in the Ryder Cup and Presidents Cup until this year. And earlier this week, his record 25 consecutive seasons inside the Top 50 ended.

Woods wouldn’t say if Mickelson was one of five players whom he called to tell them they hadn’t been picked. The only player whom he identified was Rickie Fowler, who slipped to 21st in the world rankings and hasn’t played since the FedExCup playoffs because of his marriage and lengthy honeymoon. Fowler, who finished 11th in the points standings, has made six national team appearances, including the last two Presidents Cups. He has five PGA Tour victories, including the Waste Management Phoenix Open in January, played on two winning Walker Cup teams and played well in the Presidents Cup in 2015 and 2017 and the Ryder Cup in 2010, 2014, 2014 and 2016.

“That was a tough phone call (to Fowler),” Woods said. “Rickie’s a good friend of mine, and I’ve known him for a long time. Kept it short and quick. No reason to make it a lengthy conversation. He’s obviously going to be very disappointed by it. I’ve been on that side. I’ve been there when the captain didn’t choose me, and I get it. It’s not easy.

Those sentiments gave the impression that Fowler would be Koepka’s replacement if the No. 1-ranked player can’t go.

“Right now, we’re just waiting on Brooks’ rehab and coming back to golf and when he’ll be ready,” Woods said. “That’s open-ended, and we’ll cross that bridge when we cross it.”

Woods joins Hale Irwin as the only playing captains in Presidents Cup history. Irwin, a three-time U.S. Open champion, was in the inaugural Presidents Cup in 1994 and played three matches at the Robert Trent Jones Golf Club in Virginia. He and Loren Roberts beat David Frost and Fulton Allem 3 and 1 in Friday foursomes; he and Jay Haas lost to Frost and Peter Senior 6 and 5 in Saturday foursomes; and he beat Robert Allenby 1 up in the Sunday singles.

The United States has won the last seven biennial matches and leads the series 10-1-1, with the tie coming in 2003 when a playoff between Woods and Els was halted after three holes by darkness at Fancort Hotel and Country Club in George, Western Cape, South Africa. The International side’s only win came in 1998 at Royal Melbourne.

On paper, the U.S. is a prohibitive favorite as 11 of the 12 Americans are ranked higher than the highest-ranking International player. The only American below an International is Kuchar at No. 22. Scott (17) and Matsuyama (22) are above him.

“We’re going to have a pretty solid team,” Woods said in the understatement of the announcement of his captain’s picks. “We certainly have the advantage in the world rankings. Our players have earned that by playing well around the world and playing well in big events. But when you start out on Thursday, it’s 0-0. We’ve got to go out and earn points to win the Cup.”

The Junior Presidents Cup, hosted by the American Junior Golf Association and PGA Tour, will kick off Presidents Cup week Dec. 8-9, and one of the 12 U.S. players will be 16-year-old Ben James of Milford, the youngest on the team. James, who plays out of the Great River Golf Club in Milford, is a junior at Hamden Hall Country Day School. He was the last to qualify for the team after he won the AJGA Killington (Vt.) Junior Golf Championship, New England Junior, Connecticut State Golf Association Junior and Northern Junior; finished second in the AJGA Wyndham Invitational; was low amateur and third overall in the Connecticut Open and low state finisher and tied for ninth overall in the Boys PGA Junior Championship at Keney Park Golf Club in Hartford; and tied for 19th in the AJGA Junior Players Championship at TPC Sawgrass in Ponte Vedra, Fla., to clinch a spot on the U.S. team. James, who has committed to the University of Virginia, also was named to the AJGA Rolex Junior All-American second team and will be honored at the Rolex Junior All-American Awards Banquet on Nov. 23 at PGA National Resort & Spa in Palm Beach Gardens, Fla.

The U.S. team qualification was determined by the Rolex AJGA rankings, while the International team selection was based on the World Amateur Golf Rankings. All 24 players will compete in six four-ball and foursomes matches on Dec. 8, and there will be 12 singles matches the following day. The team captains are Justin Leonard for the United States and Aussie Stuart Appleby for the International.