BOSTON, Mass – If you haven’t heard the latest buzz in the golf world that doesn’t involve Tiger Woods, take a deep breath and brace yourself!

When she was a regular contributor to the highly-watched ‘Morning Drive” show on Golf Channel from 2011 -2015, one word never used to describe her career then was “talent.” Viewers were more impressed with her flamboyant outfits and her curvy, hard body.

Can we all agree Holly Sonders was a ‘knockout’ when on camera. She has sex-appeal. Correction, Sonders has tremendous sex-appeal. Think Bo Derek “10” superiority.

Frankly, it didn’t matter what she mumbled about golf news, her bombshell presence on TV was jaw-dropping.

Sonders, would go on to become the network’s most popular personality. Her bubbly persona, quick wit, and all-American girl looks, was a winning formula for the 2009 Michigan State grad.

So, what does Holly Sonders, the definition of a female sports media fraud do when her fledging career is a complete failure?

FOX TV gave her the boot and she spent a turbulent 2019 getting enhancements, tucks and other plastic surgery.

Today, 34-year old Holly Sonders is back with a new career. Nearly unrecognizable, and with a very different, seductive Internet profile.

How easy is it to make money in pornography on the Internet?

According to a report in the Wall Street Journal, a stripper named Danni Ashe read a book on HTML programming and launched her own fan website. She started charging $15 a month for access, and before long, Ashe was making $2.5 million a year, reportedly using the bandwidth with great success in Central America.

In one eye-opening photo set, Sonders is seen sucking on a banana, and then engaging in repulsive, degrading and utterly disgraceful activities.

One promo ad from Sonders reads: “Lounging in a teeny lace bra, thong and fishnet leggings (fire emoji) Want to join me? LOL.”

She added in another, “Explicit SELFIES in bed BARE and SMOOTH and eXXXtra PERKY (fire emoji) in FULLY UNCENSORED and extremely PRIVATE NAUGHTY selfies.”

It was a photo of a seductive Holly on the tennis court with her legs spread wide open, fully exposed.

Sonders quickly deleted it after realizing it should’ve been cropped to  tease on IG. 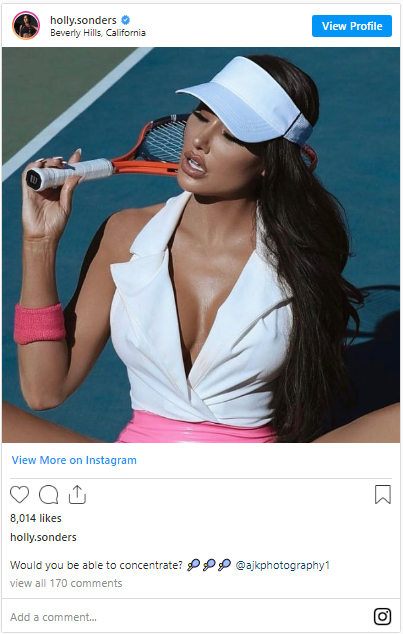 Seems the sad moral to the story is when her sports media career hit turbulence, Holly Sonders has leveraged the assets that made her a TV star in the first place.