BOSTON, Mass – In what has become an annual event on the golfing calendar, TNT’s The Match is back for round No. 2 in 2022, as four of the best golfers in the world tee off in this exhibition for fans’ enjoyment and to raise money for charity – specifically Hurricane Ian relief efforts.

The Match dates back to 2018 when Tiger Woods and Phil Mickelson, two of golf’s biggest rivals, had a head-to-head matchup. Then, during the pandemic, more of these exhibitions took place, including Woods and Mickelson again facing off with another pair of iconic rivals, Tom Brady and Peyton Manning, joining them. Other editions of The Match have featured other famous athletes, including Seth Curry, Charles Barkley, Aaron Rodgers, Patrick Mahomes, Josh Allen and more.

This fall 2022 edition of The Match, however, is getting back to basics with four major-winning golfers. And as a fun twist, this event is taking place under the lights in primetime.

Here is everything that you need to know about The Match.

This iteration of The Match takes place Saturday, December 10, starting at 6 pm ET.

Since 2020, there has been a fall edition of The Match, typically right after the Thanksgiving holiday. This year’s edition, however, is the first time that the event is taking place at night, under the lights.

The Match airs on TNT, with simulcasts being available on TBS, truTV and HLN. So you have your pick of channels to watch the golf event on. If you’re interested in additional supporting content, the Bleacher Report app has expansive coverage plans leading up to and during The Match.

Tiger Woods is 15-time major winner and one of the greatest golfers to ever play. Despite injuries impacting his ability to play as frequently in recent years, he remains the most recognizable and most popular golfer in the world. Speaking of injuries, Woods did pull out of the Hero World Challenge, taking place from December 1-4, with a foot injury. This is Tiger’s third appearance in The Match; he has won one and lost one.

Playing with Woods is Rory McIlroy. A four-time major champion in his own right, McIlroy is coming off a spectacular 2022 season that saw him win the Tour Championship and FedEx Cup in the PGA and reclaim the world No. 1 ranking. This is McIlroy’s first time participating in The Match; he is the first non-American to participate in the event.

Going up against the team of Woods and McIlroy are well-known friends Jordan Spieth and Justin Thomas. Spieth burst onto the scene in 2015 when he won The Masters, the US Open and finished second at the PGA Championship and third at the Open Championship. Since then, the three-time major winner has been one of the more popular golfers on tour.

Justin Thomas is the most recent major winner of the group, winning the 2022 PGA Championship, his second major of his career (the previous also being a PGA Championship). Thomas has always flown a bit more under the radar than his three peers in The Match, but he is one of the more consistent players on tour.

Neither Spieth or Thomas have previously competed on The Match.

One fun feature of The Match is that each of the golfers also have their custom cart, which Golf Digest shared a look of on Twitter. 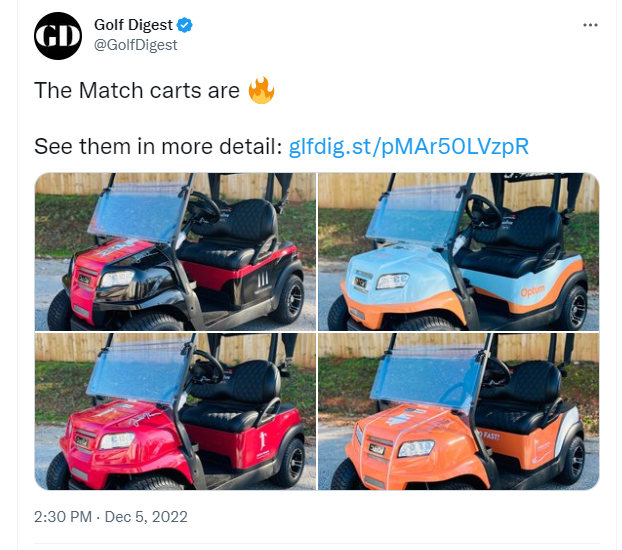 TNT, TBS, truTV and HLN are all cable channels to watch. If you’ve made the move to live TV streaming services, this is when it gets more particular. Hulu with Live TV, Sling TV and YouTube TV are among the services that carry TNT and the other channels.

The format for this edition of The Match is going to be a head-to-head matchup between Woods/McIlroy and Spieth/Thomas. It is slated to be a 12-hole match-play event.

Here are the winners of the previous editions of The Match: 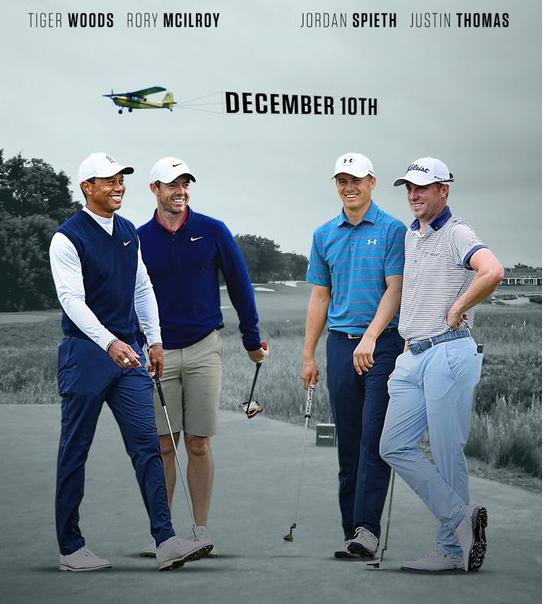