BOSTON, Mass – On the heels of a record-setting summer, September saw the biggest rounds increase yet in 2020, with play up nationally 25.5%.

September typically accounts for just about 11% of total annual rounds — even higher than the spring months — so this is another significant jump as the industry continues to enjoy a resurgence after the coronavirus forced more than half of the nation’s 16,000+ golf courses to suspend operations for over a month earlier this year. The latest increase represents approximately 12 million more total rounds than September of 2019.

Entering October, play was up 8.7% nationally versus the same period a year ago. That reflects a year-to-date increase of about 29 million more rounds, even with the loss of about 20 million rounds during the spring due to Covid-related shutdowns.

Every state in the continental U.S. has seen increases in play of at least 2% for each of the past three months. A major drop in precipitation helped fuel a 46% September rounds-increase in Minnesota, while other Midwest states also saw notable increases: Illinois (+35%), Wisconsin (+29%), Michigan (+27%), Indiana (+27%) and Ohio (+26%). 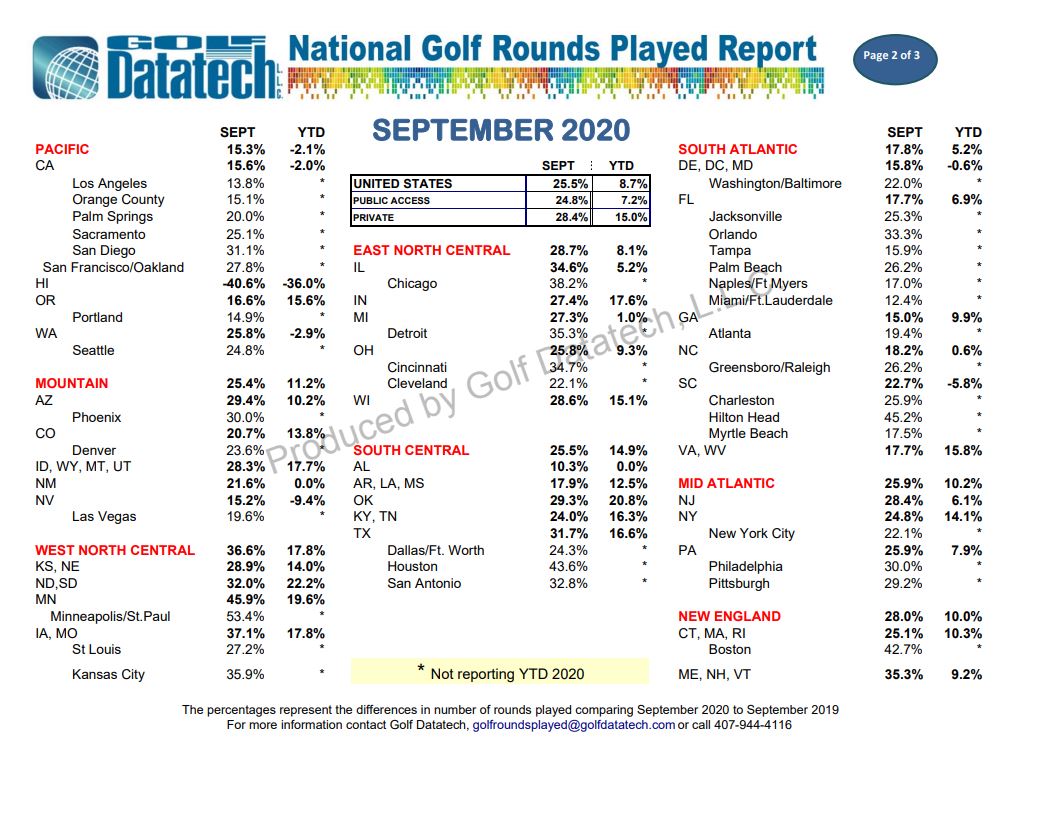 Play was up at least 15% in all eight geographic regions, with increases of more than 25% in the Mountain, South Central, Mid-Atlantic, New England, East North Central and West North Central regions.

Tee sheets have been busy ever since courses around the country were able to return to full golf operations – at least in terms of play.

June saw a jump of almost 14% while July was up about 20% over last year. August followed by setting a record for the highest year-over-year increase in a peak season month at +21%. And now September, while just outside the peak season, has surpassed that.

Parts of the country will now be impacted by seasonal weather moving forward, but operators indicate demand continues to be high.

There are only a handful of states that are down in rounds for the year and several of them, California and South Carolina in particular, shouldn’t be as affected by weather in the coming months as states in the Northern-most parts of the country. California, which has the most golfers and second-most courses, was -19% year-over-year entering June, but has since rebounded with increases of +25%, +16% and +16% the past three months and may be a key driver in the final months of the year.