BROOKLINE, Mass. – Scottie Scheffler, the No. 1 ranked golfer in the world, loves shooting under par and he doesn’t mind flying under the radar as well.

Scheffler shot a 3-under 67 at The Country Club on Friday in the second round of the U.S. Open and to move into contention for his second major championship.

Scheffler won the Masters in April for his PGA Tour leading fourth victory of the year and he leads the 2022 PGA Tour money list with $11.3 million, more than $4 million ahead of the runner-up, Cameron Smith.

But at the PGA Championship, Justin Thomas stole the headlines by winning a playoff and Scheffler missed the cut. Then last week, Rory McIlroy was the talk of the PGA Tour by winning the Canadian Open and declaring he was pleased to earn his 21st career victory, one more than Greg Noman, founder of the rival LIV Golf Invitational Series. Scheffler tied for 18th last week.

Even though he’s ranked No. 1, Scheffler doesn’t mind not being the center of attention.

“Yeah, I feel like I’m kind of an under-the-radar person,” the 25-year-old resident of Dallas, Texas, after his round Friday. “I don’t really feel like there’s much chatter going around with me. Rory won last week, Tiger (Woods) was at the PGA. I’ve been No. 1 in the world for a while now, and it doesn’t really feel like it. So I kind of like just under the radar. I can show up and do my thing and then go home and rest.”

Thomas and McIlroy sometimes serve as unofficial spokesmen for the PGA Tour. Scheffler doesn’t feel comfortable in that role yet.

“Well, those guys have been on the PGA Tour for a long time,” he said. “Justin Thomas has won, like, 13 times (15 actually) and two majors, Rory has won four majors and, like, 21 times on the PGA Tour. Those guys are definitely going to be more the spokespersons and take the limelight because they deserve it. They’ve won so many golf tournaments. I kind of like flying under the radar. So for me, it makes things a lot simpler. Those guys carry our brand, and I’m really happy that they do what they do for us.”

The highlight of Scheffler’s second round was an eagle on the 616-yard, par-5 14th. His second shot with a 4 iron hit a tree, but he chipped in from 55 yards out.

“Had kind of a funny lie where it was sitting on a downslope,” he said of his second shot, “and it made that shot into the green much harder, and I caught it a hair thin and hit the tree. Fortunately it didn’t hit the tree and come backwards, it kind of just fell down in front of it. Had a good lie and hit a good chip and it went in.”

Scheffler’s playing partner, 2017 and 2018 U.S. Open champion Brooks Koepka, also eagled the 14th by hitting his second shot with a 4 iron from 271 yards out to within 14 feet and sinking the putt.

“Scottie, I thought it was going to get over the tree, and it didn’t,” Koepka said. “It went through. Mine just skirted it, and got lucky enough to roll up there. His chip-in was pretty solid, so I felt like I had to make it.” 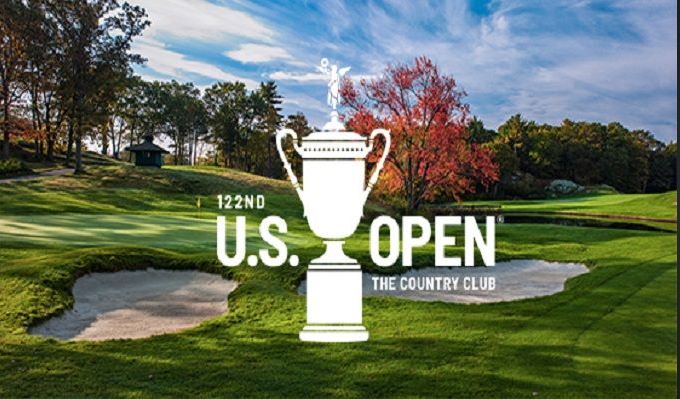 Koepka matched Scheffler’s second-round 67 to get to even par for the tournament.

Scheffler, by the way, said when the time comes for him to fly over the radar, he’ll do it.

But for this weekend, he’s focused more on winning the U.S. Open.

Scheffler is staying in a house this week with Sam Burns, who also shot a 67 on Friday to get to 2 under for the tournament.

“I am a little upset he’s beaten me by one,” Burns joked. “But yeah, it’s cool to see him playing well. Obviously he’s had a fantastic year, and it’s kind of motivated me to try to play a little bit better and try to keep up with him.”

So what’s the secret of success in rooming together?

“I don’t know,” Scheffler said. “If we knew, we’d probably do it every week.”

Scheffler said he’s willing to take advice about winning majors and the responsibility that comes with it.

“Pretty much anyone that’s gone before me when I get the chance,” he said, “I’m going to ask them some piece of advice whether it be how to handle fans or media stuff or whatever it is. I need help kind of operating through this kind of stuff.”

Koepka knows what it takes to win two majors in a year, having captured the U.S. Open and PGA in 2018. He thinks Scheffler can do it this year.

“It’s definitely difficult,” he said, “but he is a hell of a player, so I wouldn’t be surprised.”