HARTFORD, Conn. – Frank Bensel Jr. has been among the leading club professionals in the country the past few decades.

Hebert, from Traverse (Mich.) Golf and Country Club, birdied five of six holes down the stretch in shooting a 5-under-par 67 for a record-tying, 72-hole total of 16-under 270 to outdistance Bensel, Jerry Haas and Jeff Hart and claim the $21,500 first prize in his debut in the $300,000 championship.

“Those two guys are legends,” said Herbert, the 2008 PGA Professional winner who turned 50 on June 4. “It was magical yesterday (in a tournament-record 63), and it started back up on the back nine today.”

Hebert’s weekend total of 130 was the best among the 75 players who made the cut by seven strokes. But through 61 holes, Hebert was five behind third-round leader Bensel, the assistant pro at Century Country Club in Purchase, N.Y., in the Metropolitan (N.Y.) Section PGA who appeared ready to run away with the title.

Bensel, 51, began the final round with a one-stroke lead over Hebert and birdied four of the first seven holes, including Nos. 5-7, to open a four-shot advantage over PGA Life Member and former PGA Tour player Omar Uresti. But Bensel made a double-bogey 7 at the eighth hole and bogeyed No. 10, allowing several players to get into serious contention.

Bensel and Hebert each birdied the 12th hole, and Hebert got even when he birdied No. 13 while Bensel was making a bogey to fall to 12 under. Bensel birdied the 14th hole but was tied by Hebert and Haas, the golf coach at Wake Forest University, who made eagle 3 at No. 8 and then birdied four consecutive holes (12-15) to get to 7 under for the day.

But Haas, playing three groups ahead of the leaders starting the day, bogeyed the 16th hole, then Bensel bogeyed No. 15, where Hebert made a birdie to open a two-stroke lead over Haas, Bensel and defending champion Sowards of the Kinsdale Golf and Fitness Club in Dublin, Ohio. Hebert’s fourth birdie in five holes at No. 16 increased his lead to three strokes, and Haas lost any chance at victory when he bogeyed No. 16 and Bensel did likewise with a bogey at the 17th hole.

A birdie 2 at No. 17 capped Hebert’s birdie binge and clinched the win for the Michigan standout. Haas’s fifth birdie in the last seven holes at No. 18 gave him a 67, and Hart, a PGA Life Member from Solana Beach, Calif., also birdied the 18th, his fifth in the last seven holes, for 69. Bensel made it a trifecta of birdies at the 18th hole for 72.

“The way the day started, it didn’t look like it was going to go this way,” Hebert said. “As good as I finished my round yesterday, I started that poorly today. But I got a little momentum going on the back nine. … Frank was great to play with – he was playing well. Two great guys, Omar and Frank. We’re just out here knocking it around, having fun, playing some golf.” 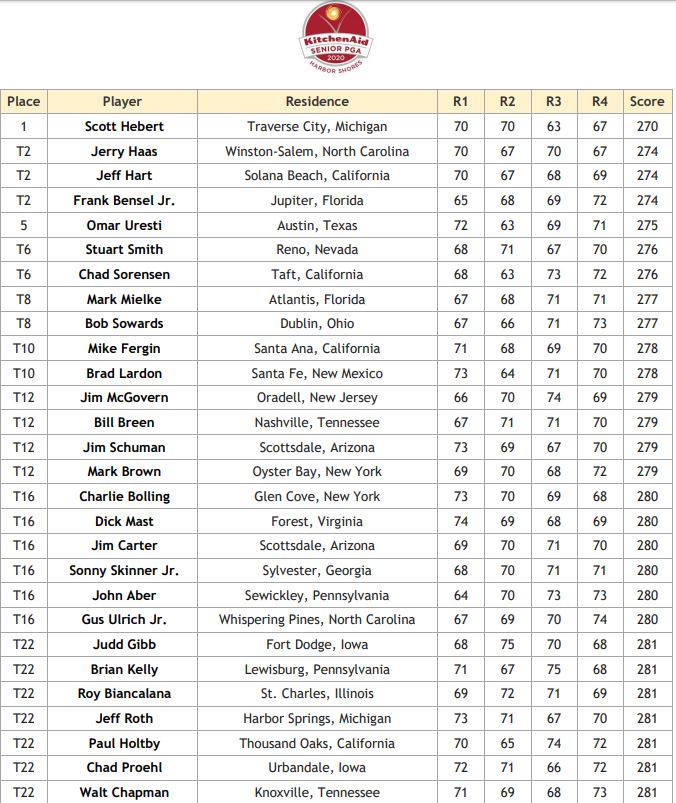 The low 35 finishers earned a berth in the 2020 KitchenAid Senior PGA Championship on May 19-22 at Harbor Shores Resort in Benton Harbor, Mich. The top five earned an exemption into the final stage of the PGA Tour Champions national finals Dec. 3-6 at TPC Scottsdale in Ariz., and the top eight, including ties, qualified for the 2020 Senior PGA Championship on Oct. 15-18 at PGA Golf Club in Port St. Lucie, Fla.

Bensel had overcame three bogeys in his first four holes with an eagle, his 12th career hole-in-one and six birdies for a 65 that gave him the first-round lead. A second-round 68 left Bensel one stroke behind Chad Sorensen, of Bakersfield, Calif., who shot a tournament-record 63. A 69 in the third round gave Bensel the narrow lead entering the final 18 holes.

Bensel, who now lives in Jupiter, Fla., won the Connecticut Open in 2009, 2011 and 2014. He has won numerous Metropolitan (N.Y.) Section PGA titles and was seeking his fourth victory in a PGA of America national championship, having captured the National Car Rental PGA Professional Championship in 2010, 2011 and 2013.

Connecticut Section PGA and Connecticut Golf Hall of Fame member Fran Marrello of Canaan Country Club was the only one of five Section PGA players to make the 54-hole cut. Marrello, 65, who won a record seventh Connecticut Section PGA Championship in August on the way to a record ninth Senior Section Player of the Year title, shot a closing 77 to finish 74th at 293. It was his 28th national club pro championship, 12th as a senior. The seven-time Section Player of the Year has participated in two PGA Senior Championships, four U.S. Opens and three U.S. Amateurs before turning pro.

The only other New England player in the 264-man starting field to play 72 holes was Shaun Powers, a teaching pro at Fairview CC in Greenwich, a member of the Metropolitan (N.Y.) PGA Section. Powers, who won the MGA Senior Open in August, had 77 for 291 and a tie for 71st.