BOSTON, Mass – For New England football fans the cruelest April Fool’s joke ever is waking up to reality and finding out that Tom Brady is no longer quarterback of the New England Patriots.

That’s more than a one-day prank to get used to!

Because of the COVID – 19 crisis, which has shut down most of America and how we do business, reporting on golf has now entered the dimwitted stage, of which I am an imprudent contributor. Along comes this rumor nugget which is peaking the curiosity of isolated, desperate sports-starved fans. 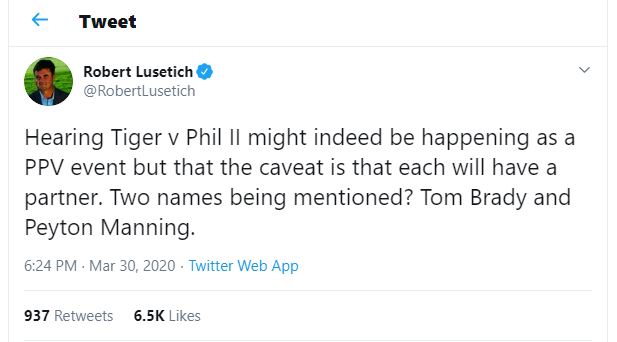 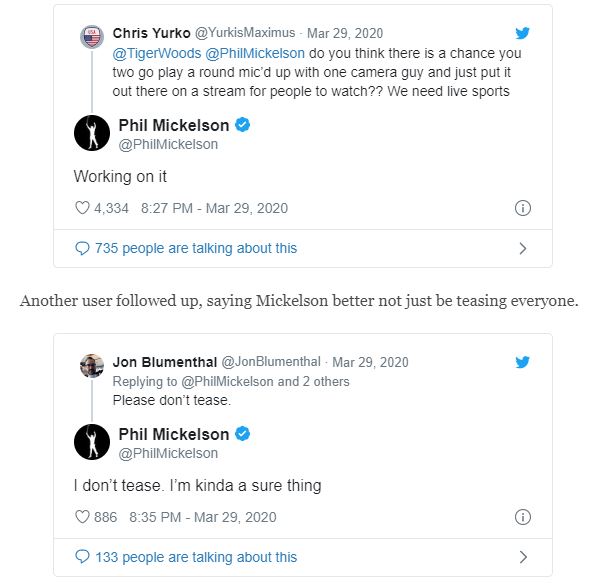 According to reliable Internet reports on Twitter and from ESPN Phil wants a rematch with Tiger to fill the pandemic void. No response from the Wood’s camp yet but this could be a huge opportunity for both superstars to not only get paid but provide significant goodwill and raise funds to develop a cure for the coronavirus disease.

Simply put, this is a win-win opportunity that makes sense. The Match 2 could be a Pay-Per-View production or a LIVE fundraising event with viewers calling in donations to a 1-800 number or donate to a website address. Call it the Coronavirus Relief Match.

To add drama (and millions of viewers) to the hypothetical scenario, two names have surfaced as potential playing partners to create the fourball match – Tom Brady (a/k/a GOAT) and Peyton Manning. Brady and Manning are both about 8 handicap playing ability level.

Mickelson on Twitter said that another “Match” with Woods is in the works.

A Twitter user suggested in a tweet to Woods and Mickelson that they play a simple match with one camera person on a livestream.

Steve Loy, Mickelson’s agent, stated that “there are a lot of moving parts” and did not address whether this event might be something to fill the virus void or one of bigger scope to be played when the golf calendar resumes. 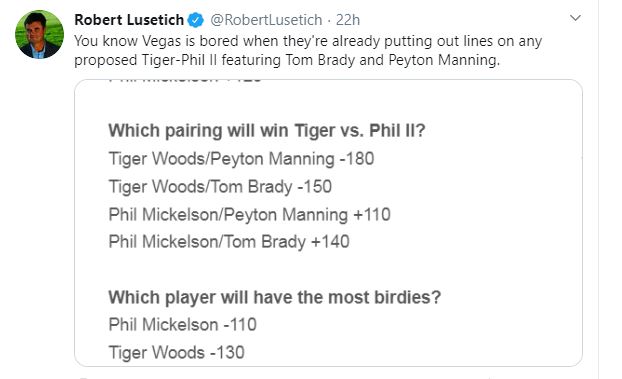 Adding further validity to the proposition is a Tweet from Robert Lusetich, an author and former FOX-TV writer, who said “You know Vegas is bored when they’re already putting out lines on any proposed Tiger-Phil 2 match featuring Tom Brady and Peyton Manning.”

For today that’s all the golf news that barely qualifies as fit to print!