Labritz, a former Central Connecticut State University standout, birdied seven of the first 14 holes in shooting a 7-under-par 64 for a 72-hole total of 17-under 267 and a three-stroke victory over Thongchai Jaidee and David Bradshaw.

“This is what I’ve worked for my entire life,” Labritz, an assistant pro at GlenArbor Golf Club in Bedford Hills, N.Y., told pgatour.com. “Every time I’m out hitting golf balls, I’m thinking this. I’m thinking of the shots I need to hit to make sure this happens. It’s super important, but it’s super fun, too. I’m doing what I love, and there’s nothing better.

“I’ve been envisioning this happening for 15 years, and it did, which is crazy. It shows the power of the mind. I’m beyond the moon. I’m almost speechless. I’ve been waiting for an opportunity like this, to know that my golf game held up.” 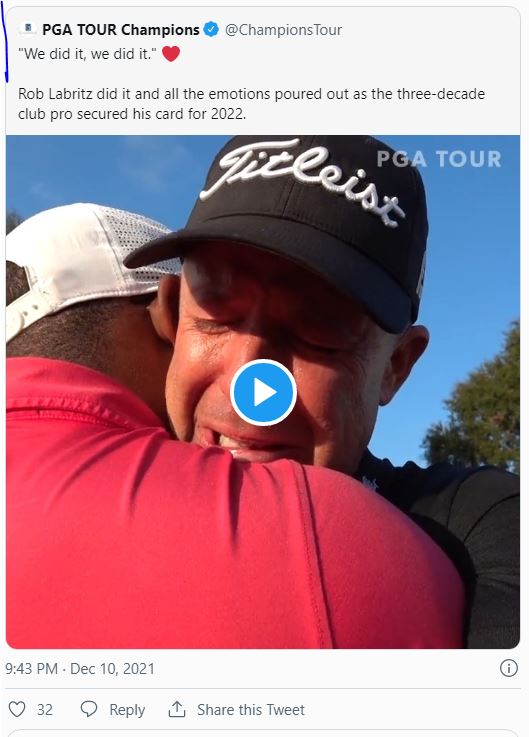 Labritz, who turned 50 on May 31, shared the first-round lead after an opening 68 and was one behind David Bradshaw entering the final round. But the bogey-free 64, the second-lowest round of the tournament, enabled Labritz to finish No. 1. He parred the first four holes and then made seven birdies in the next 10 holes before closing with four pars.

Labritz advanced to the final stage by finishing second in the first stage qualifier last month at Buckhorn Springs in Valrico, Fla. He has played in eight PGA Championships, including the last three, and earned low club professional honors in 2010 (tie for 68th) and 2019 (tie for 60th). At the Senior PGA Professional Championship in October, he finished sixth, one spot away from an exemption into the final stage.

“I’ve played with so many players – PGA Tour players, Champions Tour players, amateurs and even in the majors – and they kept saying, ‘You’ll get your chance. Just keep grinding.’ And I grinded,” Labritz said. “And I turned 50m and it seems like 50 is the new 30. We just won Champions Tour Q-School. We just got on the Tour that was supposed to be the hardest thing to do. I’ve waited for this – and it’s here.”

Labritz was one of five players to earn exemption into open, full-field events for the 2022 season. He was joined by Jaidee, Branshaw, Roger Rowland and Tom Gillis. Jaidee and Branshaw shared second at 14-under 270 before Jaidee birdied the first playoff hole (No. 10) to earn the No. 2 spot. Rowland finished fourth at 275, one ahead of Gillis, who edged a quartet of players for the final fully exempt spot, including former Suffield resident Alan Morin, who had 72 for 277.

Players who finished sixth to 30th are eligible to play in open qualifiers in 2022. That group also included Jay Williamson, a graduate of Trinity College in Hartford who lost a playoff to Hunter Mahan in the 2007 Travelers Championship. Williamson shot 70 to tie for 21st at 283.