SPARTA, Tennessee -Most people look forward to retirement; they see it as a way to wind down and take it easy. Many retirees like to travel and spend more time with the kids and grandkids. Some take up hobbies and low-impact sports; for many, it’s playing more golf. Some get really involved in the game and take it serious, others simply buy the course.

While it may be a great way to get that preferred tee time on a regular basis, most people would eschew the idea of owning a golf course, especially during their golden years. John Fitzmartin does not fit this narrative. His initial goal was to invest in his neighborhood golf course in an effort to keep up property values in the area. He was a member of the course, enjoyed playing it, and knew it well. To make a long story short, one thing led to another and he became the owner of Riverwatch Golf Club & Resort in Sparta, TN a couple of years ago.

Riverwatch sits perched high above Tennessee’s largest body of water, Center Hill Lake. The course is cut from the natural landscape and the holes tend to follow the contours of the land. The rolling hillsides and picturesque plateaus paint a picture on each hole and do a great job of melding golf and nature. No two holes are alike, many of the holes are tree-lined, with sharp drop-offs if you push your shot beyond the tree line. Dramatic elevation changes, testing doglegs, well-manicured Zoysia fairways, and well-placed bunkers lead to Bentgrass greens. Bunkers have been strategically placed and come into play off the tees and around the green complexes. Many of the bunkers are still a work in progress while the greens are incredible; lush, well-maintained and roll true. Each hole seems to get a little more challenging as you make your way around the course.

Riverwatch offers golfers 5 sets of tees and can be played anywhere from 6,850 – 4,629 yards, so there’s a distance for every level of golfer. The emphasis is on accuracy rather than length. For the most part, this 18-hole championship golf course was designed by PGA TOUR professional Peter Jacobsen and his course architect partner Jim Hardy. The original owners deviated from the course’s original routing: what is currently the 3rd hole was designed to be the first hole and the current design’s first and second holes were added to the layout. When you play the course the integration is seamless; it’s hard to believe the first two holes weren’t part of the original plans. The 3rd hole is one of the tougher holes on the course. It’s an uphill par 5 dogleg right that requires an accurate tee shot and a layup shot that finds the narrow tree-lined fairway. Had this remained the first hole, I think it a lot of golfers would have been extremely challenged right out of the gate and it may have soured them on the rest of their round.

Before your round, head to Riverwatch’s full-length driving range where you can hit every club in the bag into a variety of target greens. There’s also a short game area and putting green that entices you to work on those often neglected parts of your golf game.

Riverwatch has several memorable holes. The front nine ends with a testing par 3 that plays 183 yards from the gold tees. There’s water and sand left so if you’re going to miss, hit it right. The green sits at an angle and the difference between a front and back pin can be 2 or 3 clubs. 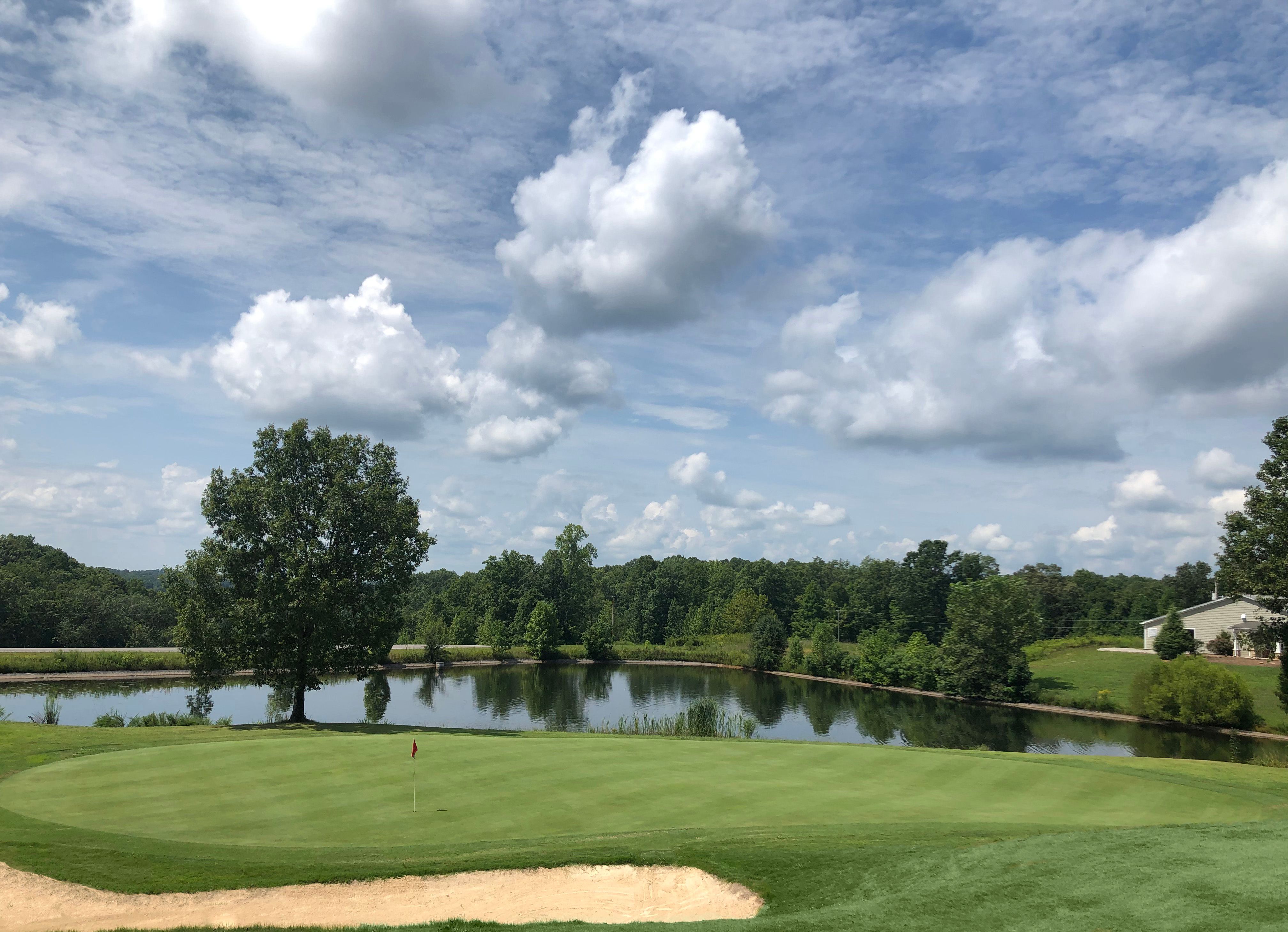 Holes 11 – 15 can make or break your round and includes two or the course’s three toughest holes. Number 11 is a 329-yard, slight dogleg right with a blind tee shot. Hit a good drive down the left side, catch the downslope and you may find your drive on or close to the green. It’s a great chance to put up a low number and get the back nine going early. Number 12 is a 500-yard par 5 with a slight dogleg right.

It’s a semi-blind tee shot and anything left is probably gone. You can bail out to the right if need be but if you hit it down the hill on 13, pack a lunch; it’s a long hike back up the hill! Hit a good drive, avoid the bunkers on the right and you can conceivably get home in two. The green is protected by a single pot bunker front left. Par or better is a great score here and gets you ready for what’s next.

Number 13 is Riverwatch’s toughest test. The hole plays 416 yards downhill off the tee and the entire fairway slopes right to left. Play down the right side and it’s pretty much a given that you’ll be playing from the left side of the fairway. Anything hit down the left is pretty much gone. A good drive will leave a mid to short iron uphill over a stone wall to an elevated green protected in front by bunkers on either side. Take a par – or bogie – and run!

Now that you’ve survived 13 it’s on to a 146-yard par 3 that is all carry over a creek with a bunker in the front middle. The green has some good undulation in it. Anything left is likely lost.

Number 15 is a dogleg left, 375-yard par 4 that is the course’s #3 handicap. The hole starts to turn around the 200-yard mark so unless a draw is in your shot repertoire, you may want to consider something less than driver off the tee. Your approach shot plays downhill to a medium-sized green. Finishing the hole with the same ball you started with goes a long way in posting a good score on this hole. 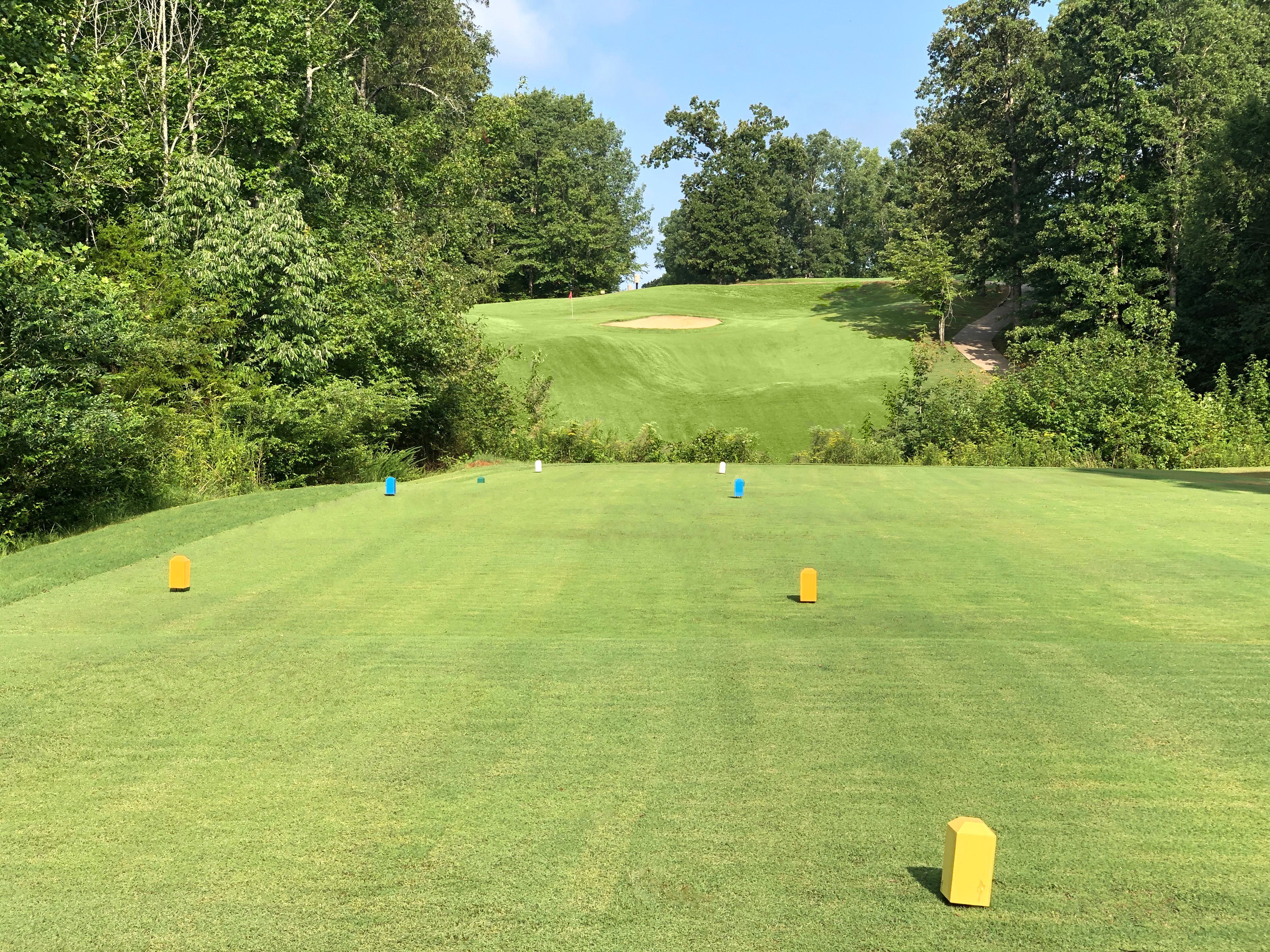 Your round ends on another scenic Riverwatch hole. Number 18 is a 458-yard par 5 that requires tremendous accuracy off the tee. Hit a good drive down the middle of the fairway off the tee and you could find yourself with the opportunity to get on in two. The green sits at an angle to the fairway and is protected by a large bunker front right. Par – or better – is a great way to end your round.

John Fitzmartin takes a considerable amount of pride in his golf course and why shouldn’t he. He’s probably the most actively involved course owner I’ve ever met. He’s done just about every job imaginable on the course, from running mowers to overhauling tractor engines to building the beautiful railroad tie steps up to the 3rd green. Did you know a railroad tie weighs 200 pounds? Fitzmartin gives a lot of the credit on Riveratch’s resurgence to Course Superintendent David Phillips. “When I bought the course, many of the greens were shot. The maintenance staff we had in place at the time was not getting the job done. Since bringing David on board, all of the greens are now in pristine condition, hold approach shots and roll true.” The pair are currently overhauling most of the bunkers and have eliminated some that were extremely high maintenance. As you make your way around the course, you’ll see these improvements for yourself. The more you play, the more improvements, you’ll see!

If you haven’t played Riverwatch in a while or had something less than a memorable experience the last time you played it, I suggest you give it another try. Golfers from Nashville to Crossville have found their way back to the club and are amazed at the renovations that have been done. If you’re traveling from farther away, Riverwatch has some amazing accommodations available right off the first tee with spectacular views of the first 2 holes. Choose from three styles of condos: Studio, Deluxe Suite, and the luxurious Grand Suite, a 2 room villa with a walk-in tile shower, a separate soaking tub, leather club chairs, and a leather sleeper sofa. There’s also a 55” 4K Smart TV to watch your favorite game. There’s also a covered patio with a great view of the golf course.