PROVIDENCE, Rhode Island – At their annual meeting three months ago at International Golf Club in Bolton, Mass., the New England Golf Course Owners Association were ecstatic in sharing news that 2019 was one of their best ever in terms of rounds played, favorable weather conditions and overall profits. When this select group meets to talk business, typically it’s filled with a fair amount of whining, but the strange thing is that no one complained throughout the entire two-day conference.

Now comes the surprise announcement that Metacomet Country Club – one of New England’s high-profile golf courses – is closing, less than one year after being sold for a reported $2.2 million to an investment group led by former PGA Tour player Brad Faxon. Metacomet Country Club is a 118-year old Donald Ross-design with a treasure-trove of Ocean State golf history, situated on 105-acres of prime real estate overlooking Narragansett Bay, about 10 minutes from downtown Providence.

Faxon, a born-and-bred Rhode Islander, is a former member dating back to the 1970s and has played on the PGA TOUR & Champions Tour in a 30-year pro golf career earning almost $20 million. Napoli is a former head professional at Wannamoisett and the director of golf at Liberty National in New Jersey. VanDeventer is founder of Riparian Partners which is a high-net worth Merger & Acquisition Company. Tim Fay is President of Stone Street Corp, a real estate & development company. And, Karl Augenstein owns & manages Triggs Memorial Golf Course.

In March 2019 Brad Faxon stated in an interview with the Providence Journal: “A lot of opportunities pop up, and I couldn’t pass on this one. I’ve been playing here since the 1970s with my Dad. I played the club championships and the father-son events here and won the club championship once. This can be a great course once again.”

“The goal here is to restore the club to its former glory,” Steve Napoli, a well-known golf industry executive told the Providence Journal. “That’s the goal. I think the current membership, and our new members, will be very pleased.”

In a letter to members dated February 21, 2020, from the for-profit ownership group, they cite unspecified losses last year were greater than originally projected and that the owners are in discussions with a company to purchase the property. Plans are for the course to remain open as a public golf course until early summer. Below is a partial copy of the letter that was forwarded to New England dot Golf

“We would like to inform the Membership that we have entered discussions toward the possible sale of the Club property. It is probably not a surprise to our members that our first calendar year was financially difficult, with our losses higher than in the Club’s two prior years. Our high hopes and primary intent were to grow the Club’s Membership to levels necessary to support the club with minimal “Outside” play and to maintain the Club as a private club. Based on the golf dynamics of the club and the state, and the downward trends of the golf industry, in general we do not see a path toward our ability to do that as a private or even semi-private club.

Since our November meeting, we have been approached by several development groups interested in acquiring the property, one of which we have chosen to proceed with. Part of the discussion involves this group potentially keeping the course open for the balance of the golf season as a public course. Based on the current discussions, if this transaction were to be completed, it would likely be finalized by the end of June or July of this year.” 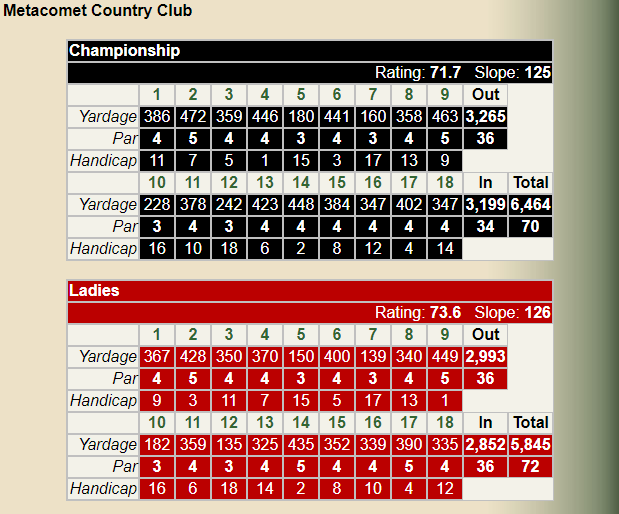 Commercial real estate industry sources in the Providence area confirmed that the value of the 105-acres, even without building permits to develop high-rise condos, could fetch in excess of $10 million!

Many members are left wondering if the original intent of Faxon’s investment group was to sell-out the land for a multi-million profit from the beginning, while claiming to want to make the course great again.

(Editor Note: This is the first in a series of reports on the sale of Metacomet Country Club.)
https://metacometgolfclub.com/