Beach trailed Colin Inglis by three entering the final round but quickly took the lead when he birdied the first three holes on the Wanamaker Course. Beach never trailed again as he closed with a 5-under-par 67 and 72-hole total of 8-under 280 to defeat Sainz by three shots.

Beach is the first lefthander to win the tournament and the first player to capture two PGA of America national titles in the same calendar year. On April 30, Beach, an assistant pro at Westchester Country Club in Harrison, N.Y., rallied to beat close friend Danny Balin, a frequent contender in the Connecticut Open, in the PGA Professional Championship at Belfair Golf Club in Bluffton, S.C. That win came only weeks after Balin accepted a new job at Fresh Meadow Country Club on Long Island and his former position at Westchester CC was filled by Beach.

But that’s only part of one of the greatest seasons in PGA of America history. On Sept. 29, he was an integral part of the United States PGA Cup team that registered a dramatic come-from-behind victory over the Great Britain & Ireland side at Omni Barton Creek Resort & Spa in Austin, Texas. And a week ago, Beach solidified membership onto the Korn Ferry Tour for 2020 by advancing through the second stage of the PGA Tour qualifying school. 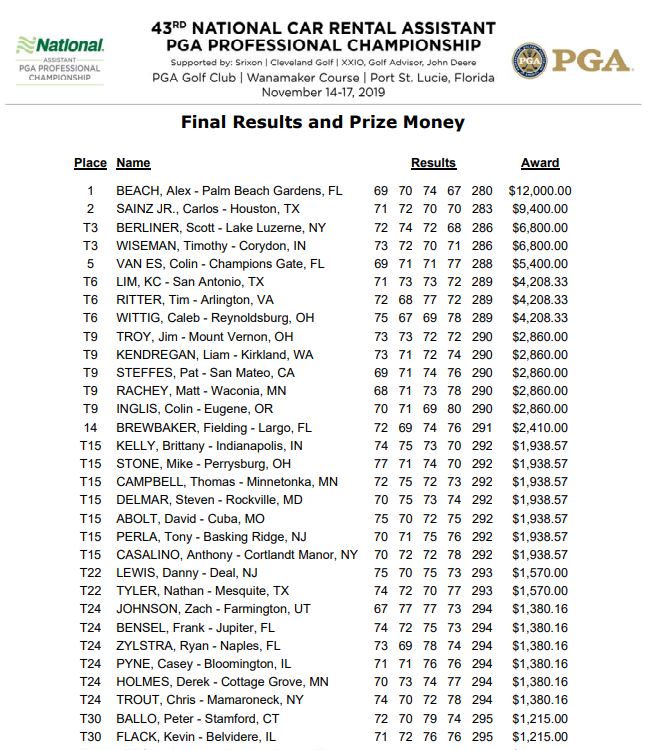 “It’s crazy. It’s a huge honor,” Beach said. “It’s been a great year. I keep asking myself how it can get better. Winning a championship like the PPC makes everything relative.

“I felt very comfortable this week. I committed a couple mistakes (Saturday) that I was frustrated with. But I knew coming back (Sunday), it’s almost an advantage to play from behind. I was confident that my experience might prevail if I could play well. Getting off to the fast start was huge. As soon as the tide flips, just like it did in the PGA Cup, guys start looking at the leaderboard.”

Beach also birdied the sixth hole to make the turn in 4-under 32 to reach 7-under and put some distance from his closest competitors. Inglis was 5-over, Colin Van Es and Matt Rachey 3-over and Caleb Wittig 2 over on the front nine. While Beach was 4-under in that stretch, the other four had 11 bogeys, three double bogeys and four birdies, which only tied Beach’s total.

“I’ve been in their position before,” said Beach, who lives in Palm Beach Gardens, Fla. “I know how hard it is to sleep on a lead. You’re thinking about outcomes. You’ve got a bunch of people texting you. I’ve learned how to block that out.”

A bogey at No. 10 was Beach’s only one of the round, but he overcame that with birdies at the 13th and 16th holes.

“I stayed in my own world,” said Beach, who shared the second-round lead with Rachey. “Carlos started marking birdies, so I realized he was going to be my closest competition. I kept the ball in front of me and calculated every shot really well. I’ve learned how to take my time and not rush through anything. Every shot matters.”

Sainz, who plays on the Korn Ferry Tour, began the final round tied with Beach but shot 3-over the first 10 holes. But he applied some pressure with birdies on the 11th, 13th, 15th and 16th holes and finished three strokes ahead of Scott Berliner and Timothy Wiseman, who tied for third at 2-under 286.

The top four finishers, if eligible, earned a berth in the 2020 National Car Rental Assistant PGA Championship at PGA Golf Club on Nov. 12-15. The event was open to any PGA members, A-8 classification or registered apprentices.