ORLANDO, Florida – Ping Golf’s latest irons the i525 are hollow with a forged variable thickness face welded to a stainless-steel body which produces a more face flex at impact increasing distance while control has been improved with a new groove pattern. 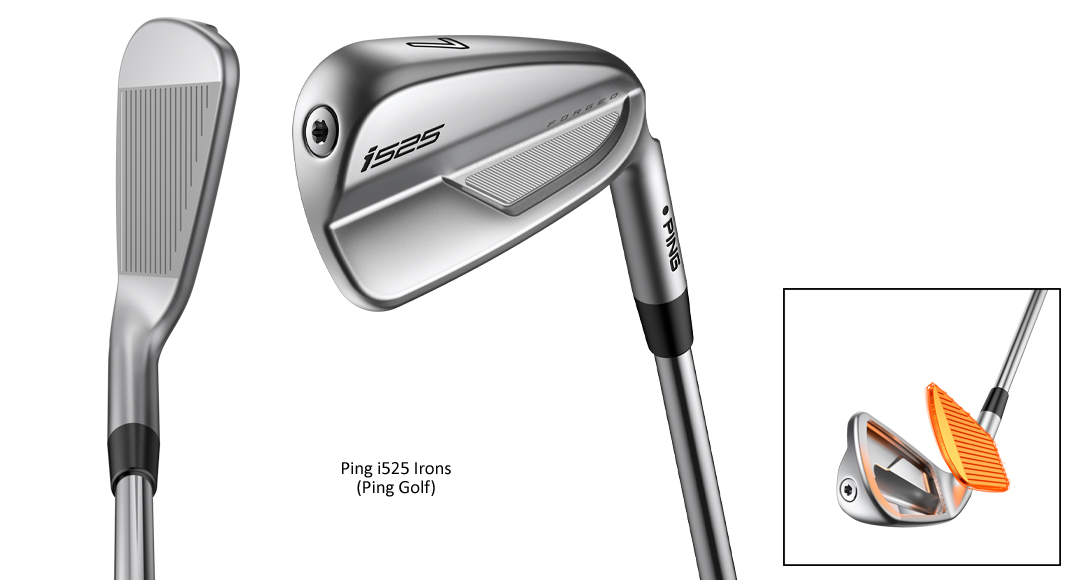 Even low handicappers appreciate a little help when it comes to their irons and the i525 Ping gives them a distance iron with weighting and construction that provides added forgiveness.

Ping has improved the i500 model irons, now four years old, with the i525 which are constructed using many of the same design features as metalwoods. The forged face is plasma welded to the body, but the big story is it is made of maraging steel which is stronger than what is typically used so it can be thinner. Thinner means it can flex more at impact to impart more energy to the ball…just like a metalwood. The maraging steel also allows the face to have variable thicknesses to help when impact is not exactly in the center.

Sound and feel are improved with polymer injected into the hollow head without decreasing the face flex. Weighting is moved towards the perimeter of the head using tungsten weights in the toe and at the tip of the shaft and the Hydropearl finish is particularly nice to compensate for excess moisture which serves to reduce fliers and retain distance control from wet grass.

Grooves are more closely spaced, a design Ping calls MicroMax, which allows an average of four extra grooves to impart better, more consistent spin characteristics especially on long irons. Ping i525s have two loft sequences other than standard that may be chosen, Power Spec 1° to 1.5° stronger than standard and Retro Spec 2° weaker.

At the introduction of their latest irons John Solheim company President said, “What’s most satisfying in the i525 iron from an engineering standpoint is how our team has been able to maximize the flexing of the metal-wood-style face structure while creating a pleasing sound and feel,” said Ping president John Solheim. “As golfers know who’ve played this type of iron design, they often sacrificed some of the feel for more distance. That’s not the case in the i525 as we’re able to provide golfers a solid-feeling iron with the increased ball speed they need to hit longer, higher shots that hit and hold the green. We’re seeing some incredible results as a lot of golfers are a club stronger or more, including Tour pros who are attracted to the compact look and increased ball speed of the longer irons.”