HARTFORD, Conn. – Travelers Championship officials had plenty of reasons to root hard during the final round of the PGA Championship on Sunday.

Third-leader Phil Mickelson is the only player to win Connecticut’s premier sporting event back-to-back (2001-02) and was trying to surpass another World Golf Hall of Fame member, Fairfield native Julius Boros, as the oldest winner of a major championship.

Brooks Koepka, who trailed Mickelson by a shot in his bid to become the first player to win three PGA titles in four years, is one of the early commitments to the Travelers Championship on June 24-27 at TPC River Highlands in Cromwell.

Kevin Streelman, the 2014 Travelers champion who finished a stroke behind No. 1-ranked Dustin Johnson last year, began the final round three shots back in fourth place in quest of his first Top-10 finish in a major championship.

Fans were treated to a wild start on the treacherous seaside links designed by famed golf course architect Pete Dye, who renovated Edgewood Golf Club into TPC Connecticut and now River Highlands as the Greater Hartford Jaycees sought a more modernized course to replace Wethersfield Country Club, which had hosted the tournament since it began as the Insurance City Open in 1952. 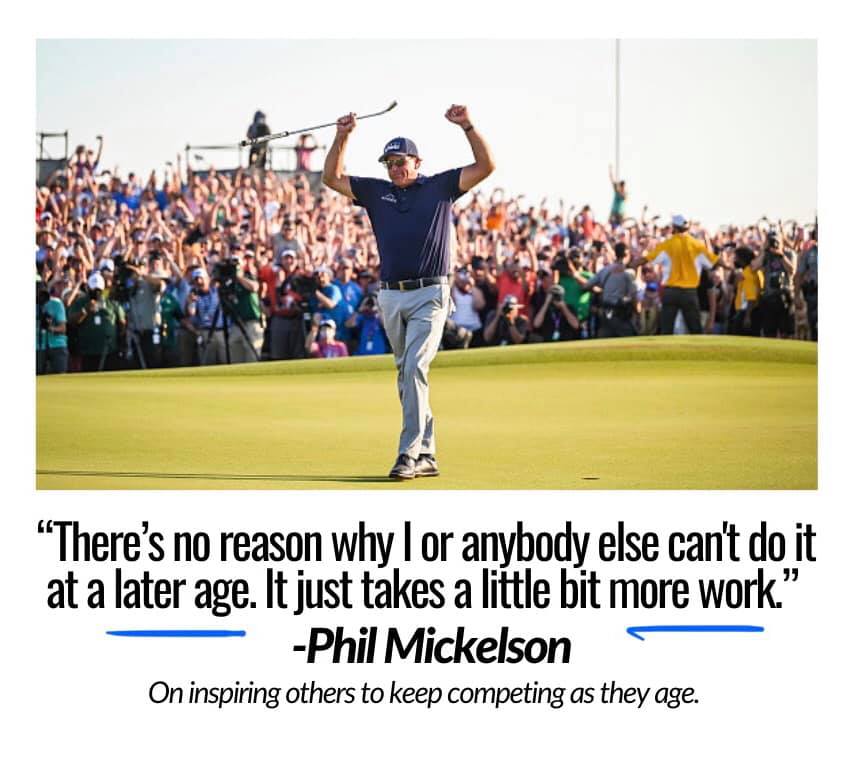 The major early highlight was Phil The Thrill sinking a 50-foot bunker shot for a birdie 2 on the fifth hole that caused him to raise his right hand with his sand wedge high in the air and punch his left hand as his ball disappeared and the crowd went ballistic. Amazingly, CBS analyst Nick Faldo, winner of six major championships, called the shot that sent shock waves around the course.

“I’d started shaky because I just wasn’t committed to some shots, and that was certainly a momentum changer,” Mickelson said. “I knew I had to get it up-and-down and was fortunate it went in.”

The dramatic shot got Mickelson to 7 under and two ahead of Koepka and Streelman, who was playing in front with Louis Oosthuizen. But an errant drive led to a Mickelson bogey at the sixth hole, where Koepka, who had birdied the first hole and made a triple-bogey 7 at No. 2, hit an approach to 3 feet for a birdie 3 and a tie for the lead.

But a Mickelson birdie and Koepka bogey at the par-5 eighth hole gave the man known as Lefty a two-stroke lead that he never relinquished in recording one of his most emotional victories, the 45th overall in a storied career and sixth major to go with three Masters, one British Open and another PGA Championship.

This was the same Mickelson who hadn’t won on the PGA Tour since the 2019 AT&T Pebble Beach Pro-Am and hadn’t had a Top 10 in a major championship since 2016 while plummeting to 115th in the Official World Golf Rankings. But concentrating on staying focused, moving slowly and enjoying the process with a new diet proved to be a winning formula for one of most popular players in the history of the game who began the week at 300-to-1 to win. 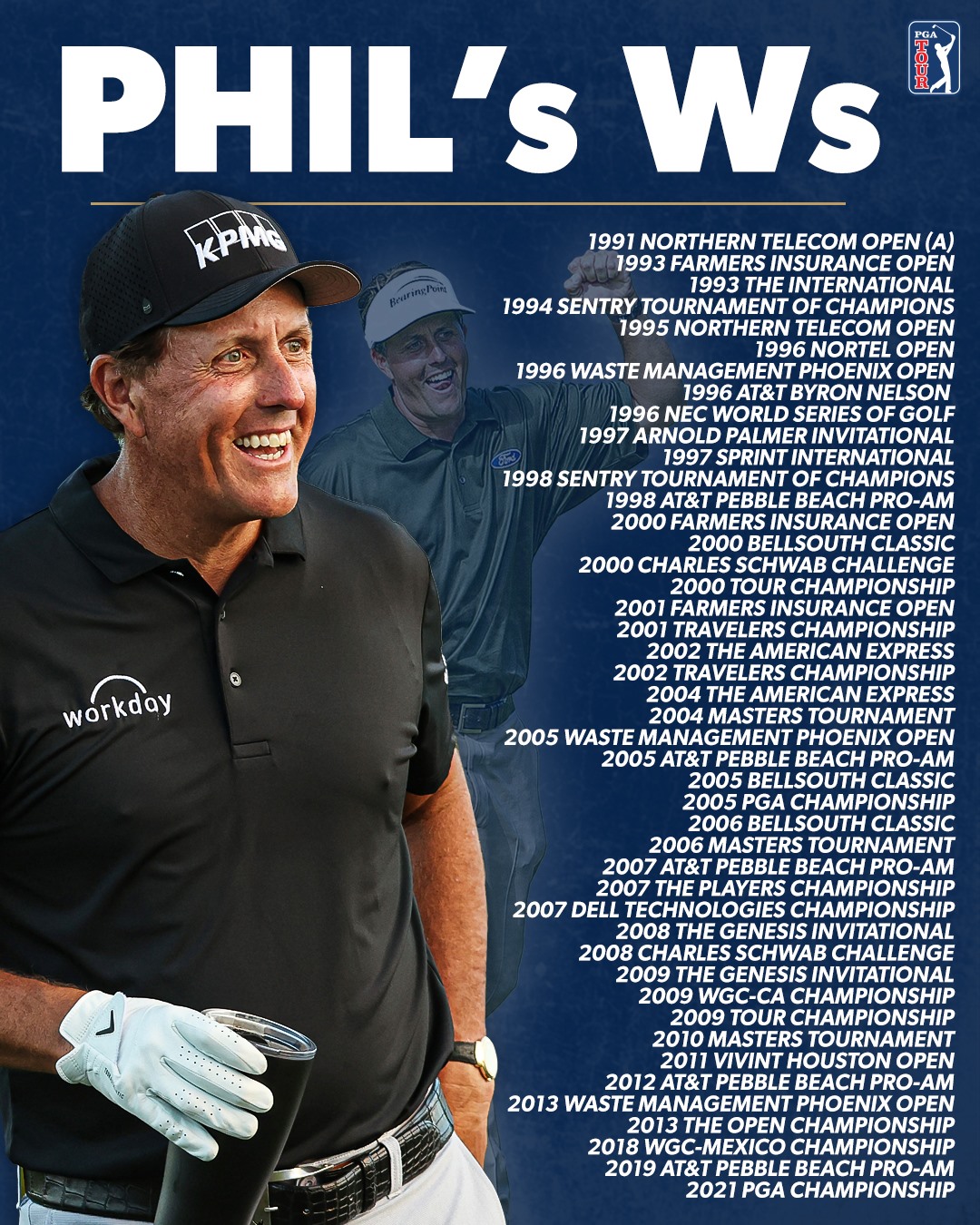 As Mickelson made his way to a par 4 on the 18th hole for a closing 1-over-par 73, a 72-hole total of 6-under 282 and a two-stroke lead over Koepka and Oosthuizen, fans swarmed onto the fairway and followed he and Koepka to the green in a scene reminiscent of the British Open shouting, “Phil, Phil, Phil.

“That was a little unnerving but exceptionally awesome,” said Mickelson, who won his first PGA Championship in 2005 and second at 50 years, 11 months. “This is certainly one of the moments I’ll cherish my entire life. I don’t know how to describe the feeling of excitement and fulfillment and accomplishment to do something of this magnitude when very few people thought I could except people who believed in me, my wife Amy, brother Tim, (teacher) Andrew Getson, (agent) Steve Loy.

“It’s an incredible day, and I’ve not let myself kind of think about the results until now that it’s over. I’ve tried to stay more in the present and at the shot at hand and not jump ahead and race. I’ve tried to shut my mind to a lot of stuff going around. I wasn’t watching TV. I wasn’t getting on my phone. I was just trying to quiet things down because I’ll get my thoughts racing so I really tried to stay calm.

“I believed for a long time that it was possible to play at this level again but yet everything was saying it wasn’t. I wasn’t executing the way I believed I could, and with the help of Amy and the rest of my team, I’ve been able to make progress and have this week. There was a lot of doubt for sure, but I hope others find that inspirational. It might take a little extra work, a little bit harder effort to maintain physically or maintain their skills, but, gosh, it’s worth it in the end, and I’m so appreciative to be holding this Wanamaker Trophy.”

So how did Phil improve physically to get over the hump?

“I just had to work harder to be able to practice as long as I wanted to, and I’ve had to work a lot harder to be able to maintain focus throughout a round,” said Mickelson, who wore out his thumbs giving thumbs-up to his adoring fans. “That’s been the biggest challenge of late because my desire to play is the same. I’ve never been driven by exterior things. I’ve always been intrinsically motivated because I love to compete.

“I love playing the game. I love having opportunities to play against the best at the highest level. That’s what drives me, and I think that that’s the belief that I could still do it inspired me to work harder. I just didn’t see why it couldn’t be done. It just took a little bit more effort.”

Many of Mickelson’s peers offered congratulations as he walked to the scoring tent and later via Twitter. They included Tiger Woods, who is recovering from serious leg injuries and had his own memorable major victories in the 2008 U.S. Open on a broken leg and the 2019 Masters after several knee and back surgeries.

“Truly inspiration to see Phil do it again at 50 years old. Congrats,” Woods said in a Tweet.