The distance-measuring devices used by players and/or caddies in PGA of America events will need to conform to the Rules of Golf regarding their use and performance under Rule 4.3a (1), namely prohibiting the use of slope or elevation functions. 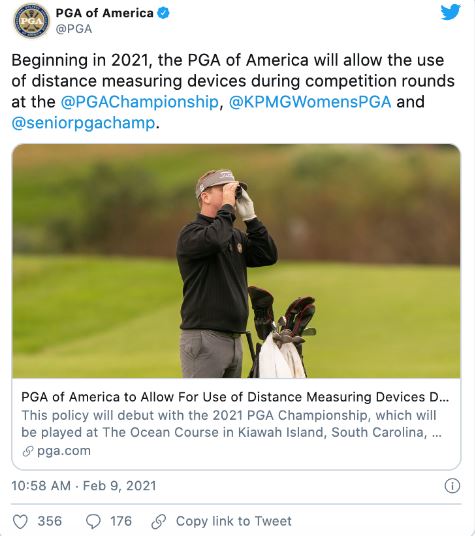 “We’re always interested in methods that may help improve the flow of play during our Championships,” said Jim Richerson, President of the PGA of America. “The use of distance-measuring devices is already common within the game and is now a part of the Rules of Golf. Players and caddies have long used them during practice rounds to gather relevant yardages.”

The reigning PGA Champion, Collin Morikawa, said he was surprised to see the news, but didn’t believe it would make all that much of a difference.

“Crazy news to see that this morning on Twitter,” he told GolfChannel.com. “Will you see pace of play improve like 10 or 15 minutes? I don’t think so, but will it help certain players pick up speed? I think it’ll be tremendous in that sense.”

The first of the three majors will be the PGA Championship, which is set to take place May 20-23 at The Ocean Course in Kiawah Island, South Carolina.