HARTFORD, Conn – After a PGA HOPE graduate received his own set of clubs at the end of a program, he told coach John Nowobilski that the last time he held something that close was an assault weapon.

“Tears flowed down his eyes – and mine,” Nowobilski recalled.

Nowobilski was an All-American at Central Connecticut State University who played in four Greater Hartford Opens and worked for clubs in the Connecticut Section PGA for more than four decades before retiring in 2017 after 35 years at Tallwood Country Club in Hebron. He’s a member of the Section Hall of Fame who has been part of the PGA HOPE program since its inception four years ago and recently organized the Irish Pub Night Salute to Veterans dinner show, featuring Andy Cooney and his band, that raised $2,600 to benefit the Section PGA HOPE program.

“I’m hooked as a HOPE coach,” Nowobilski said. “To see the veterans’ faces filled with excitement and joy after what ‘baggage’ they must carry with them whether it be physical or psychological is so rewarding. And if I can be a part of it, even for six weeks, I’m in. God bless our troops and veterans.”

Section Tournament Operations Director Dennis Dungee recalls a veteran and PGA HOPE participant attending the first two sessions of a program at Goodwin Park Golf Course in Hartford and then being absent for the next two. When he showed up a little late for the fifth session, Dungee greeted him and asked if everything was OK. He received a stunning response.

“It’s my two-year anniversary of my attempt to commit suicide, and the thoughts were crossing my mind again,” Dungee said. “But I decided to give this golf thing one more try.”
Dungee noted that “PGA HOPE saved the young man’s life. That veteran is still playing golf. That’s the power of PGA HOPE!”

PGA HOPE (Helping Our Patriots Everywhere) is the flagship military program of PGA REACH, the charitable foundation of the PGA of America. PGA HOPE introduces golf to veterans with disabilities to enhance their physical, mental, social and emotional well-being. The program introduces the game through a one-day introductory golf experience after which they participate in a 6-to-8-week curriculum taught by PGA Professionals trained in adaptive golf and military cultural competency.

All programs are funded by PGA REACH and supplemented by PGA Section Foundations, so the cost of programming is free to all veterans. After completion of the program, participants receive a graduation card, offering them a range of golf-related benefits in their region. The program is open to all military veterans, with an emphasis on serving those with physical and emotional disabilities. Department of Veterans Affairs (VA) staff that work with HOPE veterans are invited and encouraged to participate, as their involvement is beneficial to the success of the program.

PGA HOPE has a Memorandum of Understanding (MOU) with the VA, which enables Recreational Therapists to refer veterans to the PGA HOPE program as a form of therapy. Through a robust program strategy, PGA HOPE aspires to create a physically and emotionally healthier veteran community by shaping lives, changing lives and possibly saving lives through the game of golf. 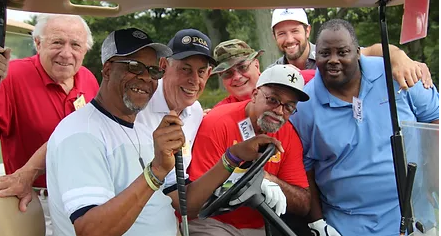 David Lewis of Hamden, the Fleet Program Manager for Veterans Administration Connecticut who works at the VA Hospital in West Haven, is admittedly fortunate that he did not sustain any injuries during 28 years of military service with the Navy, Marines and Army while serving in North Carolina, Southern and Northern California, Guam, Bosnia and the Mediterranean.

“I feel blessed to say that the only disability I have is seeing other veterans suffering,” Lewis said. “I might have a bit of PTSD from the trauma when our son, who served eight years in the Marines, was injured in Iraq when their truck was hit by a suicide bomber. That was not a call either my wife or I would ever want again. The six buddies he was sitting with are all dead, but somehow someway my son made it through with only minor burns to where he only needed a graft on his left thumb. So I keep saying he is facing his demons being a firefighter (in South Carolina).”

Lewis initially got involved with PGA HOPE through the VA and began taking veterans from West Haven to Goodwin Park GC when they started the program in 2018.

“I was asked if I wanted to participate since I was a veteran, and I of course agreed as I was going to be there waiting for the veterans anyway,” Lewis said.

Lewis, the vice chair for the Hamden Veterans Commission, has taken the instruction four times and will be doing it again when the program resumes April 27.

“I really enjoy the program that much and will keep doing it until I can’t anymore,” he said. “I think the program really helps a lot of these veterans, so by being their transportation, I get to hear them all talk about what a great two hours they just had on the way back.” 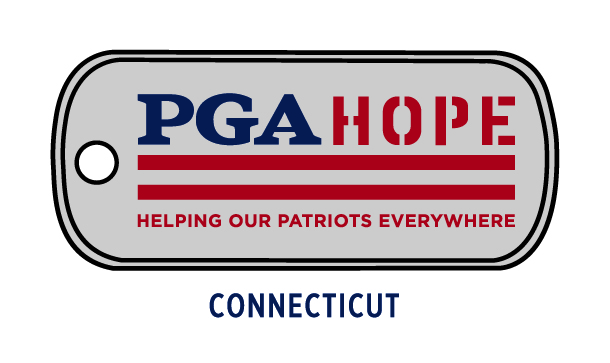 Greg Vanhouten, 64, was a Marine Corps officer in the Navy for 18 years, serving in Italy, Japan, Iraq and Desert Storm. During a peace-keeping mission, he was fortunate to survive when he was 300 yards from an explosion that killed 230 Iranians.

“I fought Isis with the Kurds, whom I have always respected their culture,” Vanhouten said.

Vanhouten, who lives in Windsor, left the military in 1997 after a stint in Saudi Arabia, began working at Connecticut Sikorsky in 2007 and joined the PGA HOPE program when it started.

“I just enjoy working with the veterans,” Vanhouten said. “Helping them helps me definitely feel good about all veterans, even from other countries. You know you have some kinship, and they taught me know to play and are so patient.”

Richard Daigle, 70, of Milford served three years in the Marine Corps in Hawaii and joined the PGA Hope program in 2021 with 11 other golfers working with 15 Section pros.
“It was really neat to see everyone teaching from every different perspective,” Daigle said. “It was a great experience, and I got to play clubs that I normally wouldn’t be able to play. At the stage of my life, golf is very important because it gets me moving in the outdoors.”

Six-week program sessions resume April 27 and will take place at Goodwin Park GC (9-11 a.m.) and Springfield Country Club (3-5 p.m.). The program at Goodwin Park has more of the “older” generation of veterans (Vietnam and the like), while Springfield is more of the “younger” generation (Iraq and the like). To join the program, contact Dennis Dungee at ddungee@pgahq.com.