Alex Beach, Jason Caron and Danny Balin will be among the 10-man American team that will face the Great Britain & Ireland side in the premier international match-play showdown for PGA club professionals at Omni Barton Creek Resort & Spa that runs through Sunday. 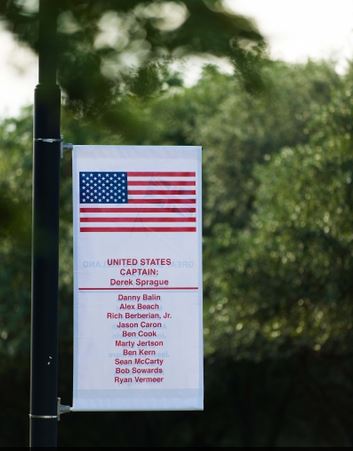 “We have a very talented team,” U.S. PGA Cup captain Derek Sprague said. “It’s a good mixture of players who have PGA Cup experience and those who have proven themselves on a big stage in the past. Our players have had the experience of playing in the PGA Championship, which will help in preparation against a strong team.”

This year is the first time in tournament history that the U.S. isn’t favored to end a two-match losing streak in the “Ryder Cup for the PGA Club Professional.” The U.S. holds a 17-7-4 record in the biennial event but faces an uphill battle to reclaim the Llandudno International Trophy.

To try to boost the Americans’ spirits, victorious 1999 U.S. Ryder Cup captain Ben Crenshaw visited the team Monday night. The Austin native appeared nearly 20 years to the day when he pointed his right index finger and issued his sendoff message to the media at The Country Club in Brookline, Mass.

“I have a good feeling about this; that’s all I’m going to tell ya’,” Crenshaw said before the Americans rallied from a four-point deficit heading into the singles matches to a 141/2-131/2 victory. 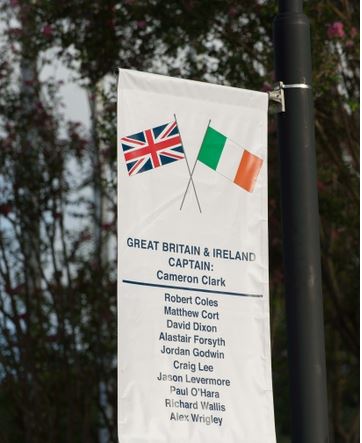 “It was great that Ben gave us his time to be here,” said Sprague, who was PGA of America president from 2014-16. “Ben obviously understands team golf competition and what the Ryder Cup meant to him. Hopefully, I won’t have to use his words on Saturday night, but I will, if I must.

“I have my own little thought about ‘fate.’ We have two Bens on our team (Cook and Kern). I think that might be magical for us. … We have six rookies on our team, and you’re going to have a couple stars coming out of that group. They may be a little naïve with the weight of team and country on their shoulders. I will condition and encourage them to play their own game. We need those veterans that will be the rocks for those whom they gravitate to and want to join for practice.”

GBI captain Cameron Clark in undefeated in the event, winning as a player in 2015 and as a vice captain in 2017. He’ll have six veterans on the team, including two returnees from 2017, Robert Coles of Romford, Essex, England, who was 4-1, and Matthew Cort of Rothley, Leicestershire, England (2-2). Coles tied for 69th last week in the BMW PGA Championship, a marquee event on the European PGA Tour.

They will be joined by four players from England – David Dixon of Bridgwater, Jason Levermore of Ipswich, Richard Wallis of Whitstable, Kent, and Alex Wrigley of Hartlepool – Scottish rookies Alastair Forsyth of Glasgow, who won the PGA Professional Championship by 11 strokes and June, and Paul O’Hara of Holytown, who was a three-time Walker Cup Team member and the 2017 PGA Professional champion.

“I don’t want to take anything away from the guys who played in 2015 and 2017, but this is one of the strongest teams we’ve ever produced,” Clark said. “The expectations from the PGA and from the country are big, so it comes with its own pressures in itself. But these guys are very capable of handling it, and we’re confident heading to America.”

So is Sowards, the PGA Director of Instruction at Kinsale Golf & Fitness Club in Powell, Ohio.

“The last couple PGA Cups we have seen how strong the new system of bringing players to the event are from Great Britain and Ireland,” Sowards said. “We come into this as an underdog, but I look forward to the challenge.”

Then in the CSGA Senior Amateur at Hermanson’s home course, the demanding Black Hall Club in Old Lyme, he and Szewczul found themselves emerging from a six-man logjam heading down the stretch, which was hardly surprising since they had won the CSGA Two-Man Championship at Black Hall in 2015 and 2016.

Three hard-earned pars at the end gave Hermanson a closing 1-over-par 72 for a 36-hole total of 3-over 145 and a one-stroke victory over Szewczul, of Tunxis Plantation Country Club in Farmington.

“I played so solidly for 33 holes and then those last three weren’t quite so solid,” said a smiling Hermanson, who won the 2018 Senior Amateur.

Szewczul, a three-time champion, ultimately lost thanks to a double-bogey 7 at the 14th hole where his drive landed on a root. Minutes later, Hermanson, playing behind Szewzul, two-putted for birdie 4. Not even a miraculous birdie on the 15th hole, where he hit a 163-yard 5-iron shot under tree branches to 15 feet, could save Szewczul.

But Szewczul embraced a different victory after recovering from multiple back and hip surgeries last year.

“Hats off to Bill,” said Szewczul, who also closed with 72 for 146 a week after he won the New England Super Senior Championship. “I’m really happy for him. He’s my best bud. I gave it a good shot. I’m a competitor just like him. He wants to beat my brains out, and I want to beat his brains out and then we go out to dinner with our wives. The friendship lasts a long longer than the golf. Given where I was 10 months ago in a walker, to be out here playing and competing is beyond my dreams.”

Hermanson won his fifth major title at Black Hall, designed by Robert Trent Jones Sr. and opened in 1967. The 25-time club champion captured four consecutive Mid-Amateurs in 1990-93 and knew whom he’d likely have to beat this time around.

“I kind of figured he’d be there at the end,” Hermanson said with a smile.

Hermanson and Szewczul will be together again Tuesday when they compete in the U.S. Amateur Senior Four-Ball Championship qualifying at The Farms CC in Wallingford.

Jim Abbott of Indian Hill CC in Newington and Richard Stevens of Eclub of Connecticut tied for third at 150.