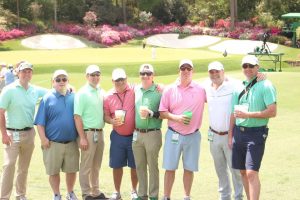 BROCKTON, MA – It’s about 1,000 miles from Torrey Street in Brockton, Mass. to Magnolia Lane in Augusta, Georgia, but that distance did not dampen the spirit of about 40 Thorny Lea Golf Club members and friends of Matt Parziale, to travel to the Masters to support his participation on golf’s grandest stage.

For decades, Thorny Lea Golf Club in Brockton was best known as the home of legendary golf writer Herbert Warren Wind, who during the 1958 Masters coined the phrase “Amen Corner” to describe holes 11, 12 and 13 at Augusta National Golf Club.

The Wind family lived down the street and Herbert learned the game at Thorny Lea. The club still holds an annual tournament in his honor. Thorny Lea is also known for its 13 state amateur titles from among six players (Ed Connell, John Tosca, Bruce Douglas, Steve Tasho, John Hadges and Matt Parziale), while boasting the most single-digit players in the Mass Golf Association handicap index.

Brockton is a blue-collar city that calls itself the city of Champions because of world boxing titles earned by Rocky Marciano and “Marvelous” Marvin Hagler. Now, Matt Parziale, a 30-year old firefighter, has carried the club’s and cities reputation a step further when he captured the U.S. Mid-Amateur Championship at Capital City Club in Atlanta, which secured his invitation to the Masters, U.S. Open and U.S. Amateur. “That’s where I learned to compete, “Parziale told reporters at his pre-tournament interview. “From the guys there who are older than me. It’s been fun being part of the club. Thorny Lea has a history of being a breeding ground for great players and I’m just proud of being part of it.”

Brockton was buzzing with Masters fever during tournament week (April 3 – 8) with Thorny Lea offering an “open house” during Friday’s televised second round coverage. Mayor Bill Carpenter and a host of city officials attended, while the Mass Golf Association created a social media buzz with suppers being called “Mattsters.”

“The week was incredible for Matt and for all of us who attended,” said Robby Thompson, partner of Champions Golf Group, an event management company. “Certainly, memories that will last a lifetime. Matt looked and played the part of an experienced professional golfer rather than an unknown amateur. He hit it great the first day but could not score. We walked all 36 holes and the only regret is Matt not being around for the weekend. “

Thompson said most of the Thorny Lea gallery wore hats and decals promoting Mass Golf. He expects a bigger contingent of Matt supporters to attend at the U.S. Open June 14 -17 at Shinnecock Hills in Long Island, N.Y. “It was incredible to see the gathering of members from Thorny Lea who made the trek down Augusta,” said Tim Watroba, from his busy pro shop on April 18. “Over 50 club members made the pilgrimage to Augusta National for Masters week. The buzz could be felt from the 1st at Thorny Lea all the way to Amen Corner! I am very fortunate that I could share the experience and extremely proud of Matt for how he represented himself, the club and the city of Brockton.” (Tom Gorman, a Brockton native for 20 years, is a former member of Thorny Lea GC) 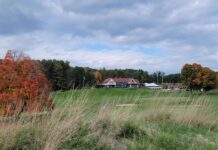