BOSTON, Mass – The LPGA Tour announced their 2021 broadcast schedule, featuring 34 LPGA Tour events, headlined by live coverage of all five major championships, as well as the Solheim Cup and the women’s golf at the Summer Olympics, in a season that marks the record purse total in women’s professional golf at more than $78 million.

In addition to LPGA Tour coverage, with the Summer Olympics in Tokyo, the NCAA Women’s Golf Championships and the Augusta National Women’s Amateur, NBC Sports will produce more than 500 tournament hours of women’s golf coverage in 2021, the most hours and events ever dedicated to the women’s game in a single year.

Highlights of LPGA Tour’s 2021 coverage include:

* The Solheim Cup, which pits the best 12 players from the United States against their European counterparts, taking place at storied Inverness Club on NBC and GOLF Channel on Labor Day weekend (Sept. 4-6).

* The 2021 season finale at the CME Group Tour Championship (Nov. 18-21), with the winner receiving $1.5 million, the largest single prize in women’s golf history.

* Introducing fans to the many diverse Members of the LPGA Tour.

“Players on the LPGA Tour come from all walks of life, from countries literally circling the globe. Thanks to our friends at NBC and GOLF Channel, fans across the country will have so many opportunities to get to know these athletes and learn their inspirational stories,” said LPGA Commissioner Mike Whan. “The future of the game really is female, and I can’t wait for our fans – especially all the young girls watching the telecast – to get to know these athletes who have made such an impact on my life and my career.”

“With more than 30 LPGA Tour events, all five majors, the Tokyo Olympics and the Solheim Cup, NBC Sports is primed to deliver unprecedented coverage of women’s golf in 2021,” said Molly Solomon, executive producer, GOLF Channel and NBC Olympics. “We will present the most hours ever dedicated to the women’s game in 2021 and continue to elevate the LPGA Tour’s stars throughout these fantastic international events.”

Coverage of the first three rounds will air on GOLF Channel.

“We are always looking for opportunities to expand our network broadcast coverage, and these two days on CBS will bring the game and our amazing players into more households,” said Brian Carroll, the LPGA’s senior vice president of Global Media Distribution. “The Marathon LPGA Classic is one of our longest-running events and has provided so many exciting finishes in LPGA history. And the team aspect of the Dow Great Lakes Bay Invitational will certainly make for a compelling final round in front of a new network audience.”

“We are looking forward to broadcasting multiple LPGA Tour events in conjunction with our full golf schedule this summer,” said Dan Weinberg, EVP, Programming, CBS Sports. “We are always looking to showcase the best athletes throughout sports and add to our deep roster of women’s programming, and the LPGA is a perfect fit.” 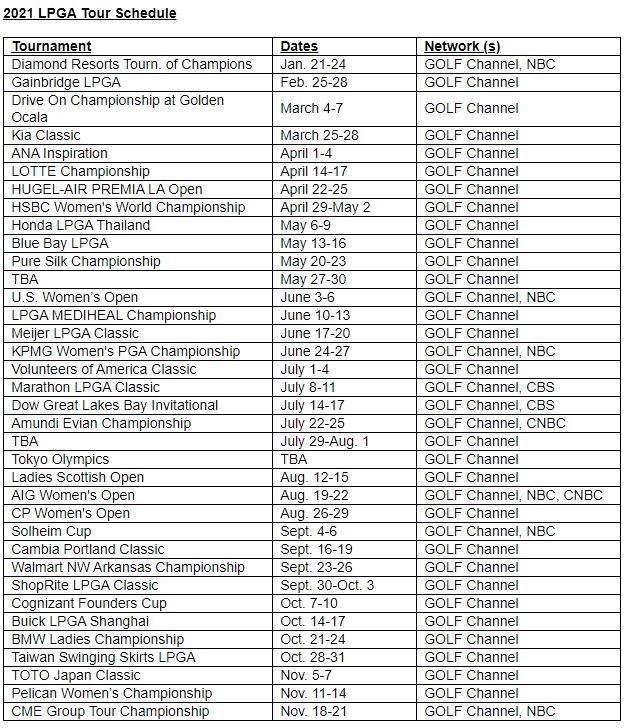