He put Transfusion, a popular mixture of vodka, ginger ale and grape juice, in a can so golfers can enjoy it more often.

Evanko worked in the golf industry for 15 years as head of sales for PGA Merchandise Shows and then as vice president of sales for a start-up golf technology company, VPAR, one of the earliest tournament tracking and live scoring apps.

Over the years, he attended a lot of corporate and charity outings at golf courses and saw that people ordered a great deal of Transfusion cocktails at clubhouse bars before and after their rounds and even at the turn.

By canning the drink, golfers can purchase them at the course or a liquor store and enjoy them throughout their rounds.

Evanko’s wife, Denise, came up with a catchy name for his creation: Links Drinks. That’s certainly easy to remember.

The Evankos live in Fairfield, Connecticut. He runs the business side of Links Drinks, dealing with suppliers, sales and distribution, and Denise handles the marketing and website, linksdrinks.com. 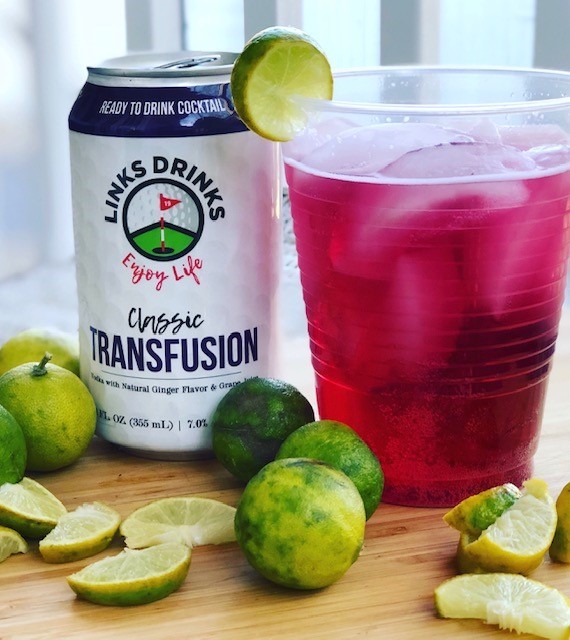 After spending a couple of years working out the kinks in Links Drinks, they launched their business in July of 2019 in Connecticut. They added eight more states in 2020 and the product is now available in 17 states, including all six New England states, New York and New Jersey. It’s sold at more than 2,500 golf clubs and package stores, including Winged Foot, the New York country club that has hosted six U.S. Opens.

Links Drinks can also be purchased at www.linksdrinks.com.

“We’re grown quite a bit in a short period of time,” Evanko said.

Links Drinks is gluten free, uses six times distilled vodka and is made with natural flavors.

Evanko said he prefers the classic Transfusion, but Denise likes the Back 9 the most.

“We get good feedback on the classic,” Evanko said. “The new flavors aren’t out yet, but hopefully the reception is just as good.”

Evanko, 52, credits his late daughter, Grace, with providing him and his wife with the courage to start their own business. Grace died of a brain tumor at age 10 in 2013. Most children with such tumors live only six to 12 months, but Grace fought for 2-½ years.

“Going through something like that gave us a lot of perspective,” Evanko said. “It’s definitely a game changer and opens your eyes to what’s important in life. So we probably wouldn’t have started our own business, especially this late in life, if not going through something like that. It gave us the perspective to take the chance, life is too short.”

“Enjoy Life” is written on each can and Evanko said Grace taught him to live his life that way.

Some of the profits are donated to charitable causes, especially those related to fighting pediatric cancer.

“Giving back to charity was always a part of the plan,” he said.

The Evankos ran a charity golf tournament in their daughter’s name for five years.

“So her memory and going through what we went through,” he said, “is definitely the strong part of our business and how we try to live our lives going forward.”

The Evankos also have a 21-year-old son, Riley, who is a junior at Quinnipiac University.

Just six months after Links Drinks launched, the pandemic hit. Fortunately for the Evankos, golf boomed during the pandemic because it is a safe outdoor activity in which social distancing isn’t a problem.

“The pandemic really put us in the game,” Evanko said. “We were able to establish ourselves as a viable product and business and we’ve been doing pretty well since.”

With two new flavors, Links Drinks could be on the brink of even greater success.

“I’m 100 percent happy we did it,’’ he said. “I’m glad we did it. I’m excited and happy for the two of us and excited to see where it will take us for the next few years.”