WATERTOWN, Conn. – Kyle Bilodeau could barely raise his right arm/fist to celebrate a 30-foot eagle putt on the second playoff hole that finally gave him a victory in the Connecticut Section Professional Championship at Watertown Golf Club on October1.

“I’m just glad I could finish,” a beaming but exhausted Bilodeau said after besting reigning Section Player of the Year Chris Tallman and Donnie Kirkpatrick in extra holes. “I picked up a cold at 3 a.m. Monday morning and have been sick ever since. I was really surprised because I had no symptoms, but when I woke up, I couldn’t breathe.

“I felt worse today, but I had to stay very even-keeled and take a few extra deep breaths. I played really solid, though there were a couple of wayward shots and a few funky things that happened. But I dug deep trying to finish, and I’m really happy to finally win this tournament because I’ve always screwed up something.”

Bilodeau, Tallman and Kirkpatrick, playing in the final two groups in the first shotgun start in tournament history, each had a good chance to win at the end of regulation before finishing 36 holes at 3-over-par 145 on the cozy Watertown GC course that played quite difficult because of fast, firm greens and difficult pin placements.

Bilodeau and Kirkpatrick shared the first-round lead at even-par 71, two ahead of Tallman. Bilodeau’s 1-under 35 on the front nine Tuesday gave him a two-stroke lead, but bogeys at the 11th and 12th holes and a double-bogey 6 at No. 13 after hitting his drive out of bounds brought him back.

Tallman, from The Orchards Golf Club in South Hadley, Mass., had one birdie at the par-5 first hole and two bogeys but fell back with three-putts at the 15th and 16th holes. Kirkpatrick, of Wampanoag Country Club in West Hartford, had a topsy-turvy round of four birdies, five bogeys and a double-bogey 6 at No. 13, where he four-putted.

Bilodeau, a PGA Active Member, and Kirkpatrick needed pars on the 18th hole to eliminate Tallman, who carded 72 in front of them, missing an 8-foot birdie putt that would have been decisive. Bilodeau three-putted from 60 feet, missing a 15-foot comebacker, and Kirkpatrick failed to convert an 8-foot par putt after a deft chip from behind the green.

Kirkpatrick was eliminated on the first playoff hole, the par-4 18th, when he failed to make a 10-foot putt to save par.

“I thought I played really well, didn’t really miss many shots, but I had a few issues with the greens,” said Kirkpatrick, who closed with 74 for his second Top-10 finish in the tournament.

The second playoff hole, the par-5 first, had about as wide a range of happenings imaginable. Bilodeau hit a long drive into the fairway, while Tallman was in the edge of the right rough on a slight sidehill lie. His second shot with a 5-iron hooked left out of bounds, then Bilodeau hit an 8-iron second to 30 feet left of the hole.

Tallman hit his fourth shot right of the green and chipped to 15 feet but never took a putt after Bilodeau converted his winning cross-country stroke, setting off his celebration that included an emphatic “yes.”

“I felt it was a little redemption for Chris making a 50-foot putt in a playoff to beat me to win the Spring Stroke Play Championship and a spot in the Travelers Championship,” Bilodeau said with a smile.
Tallman said he felt he played steady overall, but a lot of putts just wouldn’t drop.

“On the last hole (of regulation), the putt didn’t break as much as I thought it would,” said Tallman, who earned $2,200 along with Kirkpatrick. “On the second playoff hole, I tried to hold the club off because of the lie, but it rolled over and the ball went left. But Kyle deserved to win. He made a good putt for par on the first playoff hole (from 10 feet) and then makes an eagle to win. Good for him.”

That could be a swansong for Bilodeau, who said he’ll probably be done playing competitive golf at the end of the year. He is going to graduate school at the University of Hartford in quest of a masters’ degree in accounting with the hopes of getting into corporate taxes.

Meanwhile, 65-year-old Fran Marrello, the head pro at Canaan Country Club, just keeps rolling along. Despite three bogeys in the first eight holes, Marrello righted the ship and shot even par the rest of the way for a second 74 and solo fourth place. He won $1,500 and 50 Player of the Year points to solidify a record ninth Senior Player of the Year title. He also has won the Player of the Year seven times and captured 24 Section individual member championships, nine more than runner-up Adam Rainaud. The Connecticut PGA Championship is the only such event that Marrello hasn’t won.

“It was disappointing to miss qualifying for the U.S. Open early in the year when I four-putted a hole,” said Marrello, who was inducted into the Connecticut Golf Hall of Fame in 2009. “I didn’t feel I played all that well this year and was helped by Billy Downes being out with a back injury. I don’t feel as if I did anything special, but I grinded it out and got a little luck when I overtook Mark Farrell at the very end to win the PGA Senior Championship (in August). 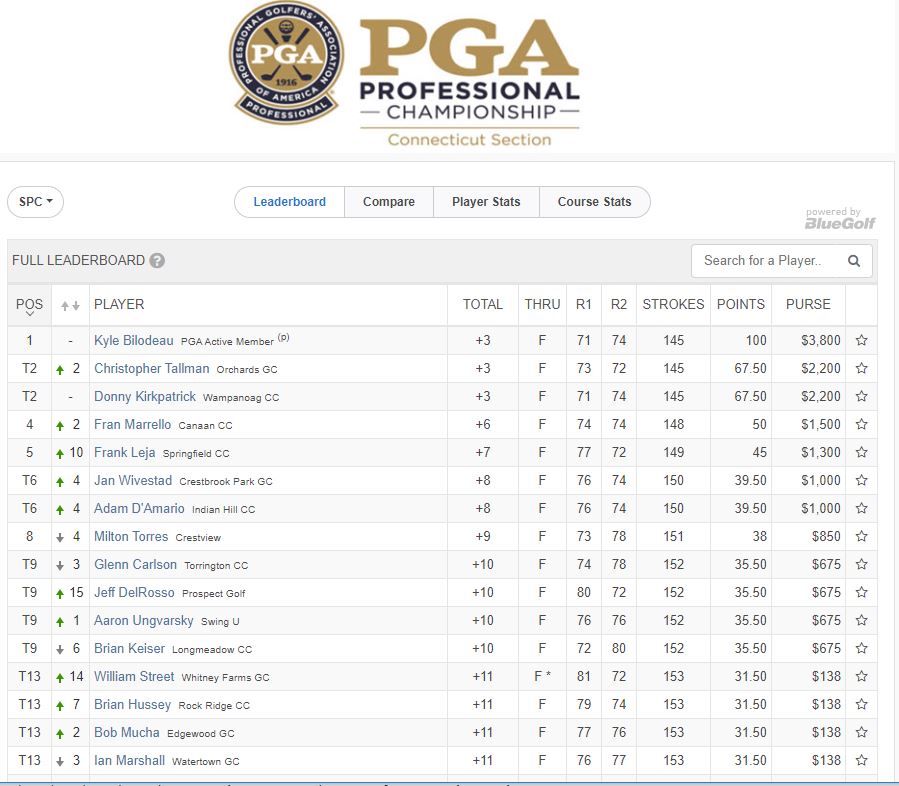 “My putting is still mediocre, so I have to hit a lot of greens in regulation to stay in contention. But it’s a thrill to still be competitive and healthy.”

Kirkpatrick, Tallman and Marrello earned exemptions into the 2020 PGA of America Professional National Championship on April 26-29 at Omni Barton Creek Resort & Spa in Austin, Texas. The 2019 Section Player of the Year also gets an exemption, but Bilodeau is not eligible. Since Tallman is the only eligible player who can win Player of the Year, Frank Leja of Springfield earned the fourth exemption when he was first alternate in a four-way playoff after closing with 72 to finish fifth at 149.

Marrello leads the Senior Player of the Year race with 340.50 points, followed by Bob Mucha of Edgewood GC in Southwick, Mass., with 210.50. Marrello, Farrell, Joe Cordani and Dan Benedetti will compete in the PGA of America Senior National Championship on Thursday through Sunday at Omni Barton Creek Resort & Spa in Austin, Texas.