JEKYLL ISLAND, Georgia – Jekyll Island is a great destination for beachgoers or travelers that want to mix a little history with relaxation and some golf. An excellent stop along a Georgia Coast road trip, Jekyll Island is just across the Florida-Georgia border and very easy to get to from Savannah or Jacksonville. With more than twenty miles of bike paths, four award-winning golf courses, ten miles of unspoiled beaches, and Georgia’s only rehabilitation center for endangered sea turtles, there’s something for everyone.

Located just across the sound from St. Simons Island, it’s difficult to compare the two islands. Jekyll is much more laid back and less commercial with a totally different feeling than St. Simons.

As a Georgia State Park, there are strict conservation clauses that limit future development on the island. Sixty-five percent of the island will always remain natural and wild. The scenic beauty that is home to a variety of animal species and magnificent Southern Oak trees with Spanish moss draping from their branches, will be preserved for future generations to enjoy.

The story of Jekyll Island has been captivating the imaginations of explorers for generations.

The first permanent settlers on the island, British colonists, established fortifications along the coast and claimed the territory for England. General James Edward Oglethorpe founded the colony of Georgia in 1733. He gave Jekyll Island its present name in honor of Sir Joseph Jekyll, a financial backer of the young colony. Oglethorpe then assigned Major William Horton to build an outpost on Jekyll Island to protect Fort Frederica on nearby St. Simons Island.

In the late 1800s, Jekyll Island became an exclusive hunting club for families with names like Rockefeller, Morgan, Vanderbilt, Pulitzer, and Baker. The once private retreat is now part of The Jekyll Island Club National Historic Landmark District, one of the largest preservation projects in the southeast.

In 1947, the Governor and the Georgia state legislature established Jekyll Island as a State Park.

FUN THINGS TO DO

Besides the things that we did and are going to tell you about, Jekyll Island also has some cool historic tours you can participate in. One of them is a tram tour that looks pretty awesome and takes you past all kinds of historic sites. Another is all about the Rockefellers and their time on the Island. So much history and it’s so pretty.

Bicycling has long been a favorite activity on Jekyll Island. With more than 22 miles of picturesque paths and trails, biking offers a scenic way to see all of the island’s hallmark points of interest. Paths wind around sand dunes, beaches, and historic sites, while the ancient oaks offer ample shade.

Georgia’s only sea turtle education and rehabilitation facility. The Center offers the public a chance to learn about sea turtles and see rehabilitation in action with a host of interactive exhibits and experiences. Year-round indoor and outdoor programs are also available for guests of all ages.

In-depth and interactive exhibits draw you in, while stunning visuals and audio tell the tale of this magical island. Constructed completely within the existing footprint of the historic stables building, the design highlights the building’s construction with high lofted ceilings and open space. 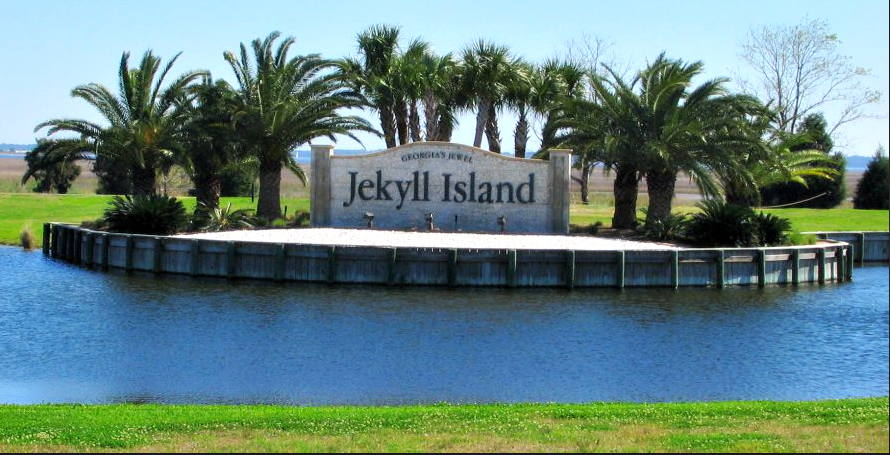 Jekyll Island Club, a member of the Georgia Golf Trail, is owned by the State of Georgia and managed by the Jekyll Island State Park Authority.

Great Dunes Course – Famed course designer Walter “Old Man” Travis put his stamp on Jekyll Island when he constructed Great Dunes in 1926. Summoned to the Island by some of the nation’s most elite families during the Club Era, Travis created the best course money could buy. Swept with oats and reflective of the Island’s unique coastal terrain, Great Dunes’ 9-holes alternate in difficulty and simplicity, creating a stimulating round on the links. Jekyll Island became a testing ground for the future of golf. In 1924, the USGA tested new steel clubs in favor of original hickory shafts and ball size & density tests were conducted, all of which changed the game of golf forever.

Indian Mound Course – Constructed in 1975, Indian Mound is a masterpiece from course designer Joe Lee. Known for displaying Lee’s signature fairway bunkers in precarious locations, this natural course displays the Island’s pristine beauty and woodlands. Though it is the shortest of Jekyll’s three 18-hole courses, Indian Mound offers plenty of challenges. The par 5s are more difficult than the modest yardage might suggest, and only one of the par 3 holes can be thought of as a soft touch. The course’s par 4 holes provide several scoring opportunities for golfers able to take advantage of the short shots into the greens.

Oleander Course – Generally thought of as the most difficult course on Jekyll Island, Oleander also has the honor of being the oldest Island link, serving as the host course for the Georgia Open during its four-year Jekyll run. Designed by one of the most respected course architects in the game, Dick Wilson, Oleander is known as the most distinct of the Island’s three 18-hole courses. Though from its fairway the course is not particularly a difficult layout, it is considered tightly designed, with ocean breezes and short grasses providing a challenge to golfers of all skill levels.

Pine Lakes Course – Originally built in 1968 and renovated in 2002, Pine Lakes is the Island’s longest golf course, meandering through ocean forests and undisturbed marsh hammocks. Golfers and naturalists alike will find solace in this tranquil outdoor venue. Known as the Island’s family-oriented course, Pine Lakes was developed by designer Clyde Johnson to incorporate family-friendly tee boxes, making it one of the few courses in the nation that provides an even playing ground for both adults and younger players.

From a historic inn to oceanfront resorts, Jekyll Island has a wide variety of accommodations that are perfect for your beach getaway. However, if you are looking for a four-star luxury oceanfront resort brimming with inspired amenities and classic Southern charm, The Westin Jekyll Island will fit the bill. The upscale resort features 187 guestrooms and 13 suites, a beachfront outdoor pool, and offers direct beach access and ocean views. Park your car and take advantage of the complimentary shuttle that will take you to the golf courses, Driftwood Beach, or any of the other Jekyll Island venues.

The Westin Jekyll Island, located directly on the beach, provides breathtaking ocean views and access to the gorgeous coastline. Just steps to the beautiful new convention center and beach village, the hotel is convenient to bike paths, numerous golf courses, miles of barrier island beaches, and outdoor recreation such as marsh eco-tours, dolphin watching, and kayaking.

Surround yourself with breathtaking nature and wildlife, historic structures around every bend, and unrivaled Southern hospitality that will keep you coming back again and again.