HARTFORD, Conn. – Jeff Curl has been around the best golfers in the world for four decades, but he has rarely seen many teenagers as proficient as Nicholas Dunlap.

“As I’ve said before, I’ve been one of his teachers and mentor for five years, and the kid is just awesome,” said Curl, who began hitting balls at 2 under the tutelage of his father, Rod Curl, who played on the PGA Tour and PGA Tour Champions. “He’s 6-foot-2, 185 pounds and wears size 15 shoes. The only two players whom I’ve seen who were as talented as him at his age are Tiger Woods and Charles Howell III.”

The 17-year-old Dunlap demonstrated his abundance of talents and scrambling ability July 25 and won four of five holes midway through the second round of a scheduled 36-hole final in a 3-and-2 victory over Cohen Trolio in the U.S. Junior Amateur Golf Championship at the Country Club of North Carolina in Pinehurst.

“This is something every junior player wants to win, and my heart is beating 100 times fast,” said Dunlap, of Huntsville, Ala. “This is unbelievable. Just the hours and hours that nobody sees, it’s finally paid off. I’ve played the last six or seven weeks on the road, and I want to win everything I play in, obviously, but I tried to get my game ready for this week and the U.S. Amateur (in three weeks). To be able to do it, it feels great. To have my name on the trophy, I can’t even put it into words.”

Dunlap’s victory was a bit bittersweet for his teacher/mentor/caddie, an Ellington native and two-time Connecticut Open champion who played more than 100 events on the Korn Ferry Tour. After carrying for the third-seeded Dunlap for 157 holes in six days, Curl decided to withdraw from the Connecticut Open, which starts July 27 at the Country Club of Darien.

Curl, Dunlap and his parents, Jim and Charlene, made the seven-hour drive from Pinehurst to Birmingham on Sunday, and Jeff and Nick, who lives 90 minutes away, will take a few days off to rest before starting preparations for the U.S. Amateur Championship at Oakmont (Pa.) Country Club on Aug. 9-15.

“I wanted to play the Connecticut Open, but I’m just whipped after walking so many holes in such a short time in just brutal heat,” said Curl, who continually advised, encouraged, cajoled, high-fived and plumb-bobbed putts for his protégé. “The U.S. Junior Amateur was the most important thing because it meant so much to Nick.”

Curl, 42, had memorable victories in the Connecticut Open in 2007 and 2013 and wanted a shot to join Kyle Gallo (four), John Golden (four), Frank Bensel (three) Kevin Giancola (three), Dick Siderowf (three) and former PGA Tour player Ed Sabo as the only competitors to win at least three times in the tournament’s 90-year history. But he settled for returning home to his wife and daughter in Birmingham, Ala., after being part of a winning team in a national championship.

The morning round was a roller-coaster with Dunlap winning five holes and Trolio four. Dunlap birdied the first two holes and never trailed in the opening 18, going 2-up three times before Trolio birdied the 18th hole to get to 1-down at the break.

The 13th seeded Trolio birdied the 20th hole to draw even and took his first lead with a birdie 4 on No. 23 as Dunlap had driving problems. Both players made nifty saving pars at the 25th hole, and Dunlap stayed 1-down when he made a 12-foot par putt at No. 26 after leaving a 70-footer for birdie well short.

“I’ve made putts like that,” Dunlap said when asked the importance of that stroke. “Whether it’s your home putting green or tournaments like this, it’s just one more, it really is. But Jeff came up to me before I hit that putt, and I probably can’t say what he said in an interview to be honest with you, but it just gave me a little bit of momentum, a little bit of confidence and I just stepped up and hit a perfect putt.”

Dunlap then got even again with a 12-foot birdie putt at the 27th hole and regained the lead when Trolio three-putted No. 28. On the 29th hole, Dunlap hit one of the best shots of the match, a 7-iron from deep rough that rolled onto the green and stopped 18 feet from the cup, setting up a winning par and a 2-up lead when Trolio three-putted from 35 feet, missing a 5-footer for par.

“I’ve won tournaments in the past, but nothing like this,” Dunlap said. “To win this year in Pinehurst on this golf course, I’ll remember it forever.”

When Trolio’s bid to extend the match missed, Dunlap shook his hand and hugged Curl and his parents, who had driven through the night on Thursday, arriving at 5 a.m. Friday to see him play. A few minutes later, Dunlap had the gold medal around his neck. 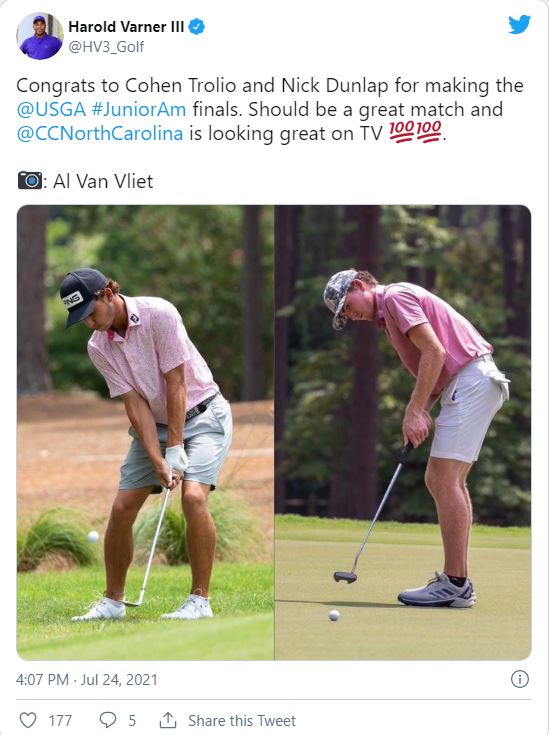 “He’s a good player,” Trolio, 18, of West Point, Mass., said of his friend. “Him making putts isn’t weird. That’s match play. That’s how it goes, momentum swings and such.”

Trolio (U.S. Junior Amateur semifinalist in 2019) and Dunlap (qualifying medalist in Decatur, Ala.) had already advanced to the U.S. Amateur. The win gave Dunlap an exemption into the 2022 U.S. Open at The Country Club in Brookline, Mass., on June 16-19, the week before the Travelers Championship at TPC River Highlands in Cromwell.

“It’ll be my first PGA Tour event, my first major,” Dunlap said of the 2022 U.S. Open. “I’m sure I’m probably going to be this nervous or even worse. It’s just going to be a learning experience for me, and I’m going to go into it with as much confidence as I can and play my game.”

The U.S. Junior Amateur wasn’t Dunlap’s first notable event and victory this year. He’s the third-ranked junior player in the country and will be No. 1 when the two above him go to college. The University of Alabama commit was a sectional qualifying medalist for the U.S. Junior Amateur and U.S. Amateur, won the Dustin Johnson Junior World Championship, was second in the Pete Dye Invitational, tied for second in the Wyndham Invitational and beat Connecticut sensation Ben James of Milford on the second playoff hole in the final of the American Junior Golf Association Polo Match Play Championship.

Dunlap will continue to have his caddie sidekick Curl, who drew plenty of raves from Golf Channel announcers Steve Burkowski and Noah Betay III, winner of the 2000 Canon Greater Hartford Open.

“It’s lifelong, and I totally trust him,” Dunlap said of Curl. “He knows my game in and out. He knows how I think. He knows if I look a certain way over a shot, and it’s the same way for me to him. If I ask him a certain thing, I can tell if he likes it. We just have that bond, and it helps a lot.

“I can’t ever say enough to thank Jeff, who has been there through all my ups and downs. I’ve learned so much from him. We had 20, 40 times this week that he would either call me off, different club, different read on a putt. In match play, it’s going to sway back and forth a couple of times, and Jeff did a great job keeping me calm, keeping me in the match, and in the end, it paid off. Without him, there’s no way I would have won.”