HARTFORD, Conn. – When it comes to roller-coaster rounds, Jason Caron survived arguably the craziest of his career Tuesday on the way to another major PGA of America tournament title.

After eagles at the seventh and eighth holes and birdies at Nos. 10 and 11, Caron was 5 under par for the final round and enjoyed a four-stroke lead in the PGA Stroke Play Championship at the Wanamaker Course at PGA Golf Club in Port St. Lucie, Fla.

But then “stuff,” as Caron called it, began to happen. He played the last four holes 4 over and found himself in a playoff with Josh Rackley and former PGA Tour player Omar Uresti. But the wacko day ended okay for Caron when he made a 2-foot birdie putt on the third extra hole to earn the $6,000 first prize.

“It feels amazing to win,” said Caron, who was born in Hyannis, Mass. and lived on Cape Cod for most of his life and is now the head pro at the Mill River Club in Oyster Bay, N.Y. “I had low expectations today because I aggravated my back. I had a lot of stuff going on today.”

Caron, 47, is a former PGA Tour, Nationwide Tour and PGA Tour Latinoamerica player and winner of the 2017 PGA Stroke Play and 2012 Connecticut Open. Caron’s wife, the former Liz Janangelo, is the teaching pro at the Mill River Club, was a two-time All-American and NCAA Division I Player of the Year at Duke and a former LPGA and Duramed Tour player who won five consecutive Connecticut State Women’s Amateur Championship and four Connecticut Women’s Open titles.

Jason appeared to be cruising to a second Stroke Play title after going 6-under over five holes, including holing a gap wedge shot from 107 for an eagle at No. 8. But he struggled down the stretch, finishing with the two eagles, four birdies, five bogeys and double-bogey 6 at the 15th hole to close with a 1-under 71 for a 54-hole of 5-under 211.

The double bogey was another major part of the “stuff” that Caron had to overcome. He thought he lost his tee shot on the 15th hole and had his playing partner, Alex Beach, look for the ball. When it wasn’t found, Caron hit another drive, only to eventually find his first tee shot in the rough he couldn’t play.

“I learned a lesson today,” Caron said. “I should have just gone up there and looked for it, especially with us riding in carts. I couldn’t believe it when we saw a ball driving up there.”

Uresti, who also had two eagles in his 71, was philosophical after he missed a 12-foot birdie putt on the third playoff hole.

“Jason should have won it in regulation,” said Uresti, of Austin, Texas. “We’ve known each other for a long time, and I think he might be playing better now than ever.”

Caron made a 12-foot par putt on the second playoff hole to stay alive, while Rackley (69) was eliminated on that hole with a bogey. In December, Rackley won a seven-hole playoff to capture Event No. 3 of the PGA Tournament Series at PGA Golf Club.

“I wasn’t really expecting a playoff,” said Rackley, a teaching pro at Tam O’Shanter Golf Club in Hermitage, Pa. “I had the same chip in regulation, and I thought I was going to make it. It hit the edge and just took off.” 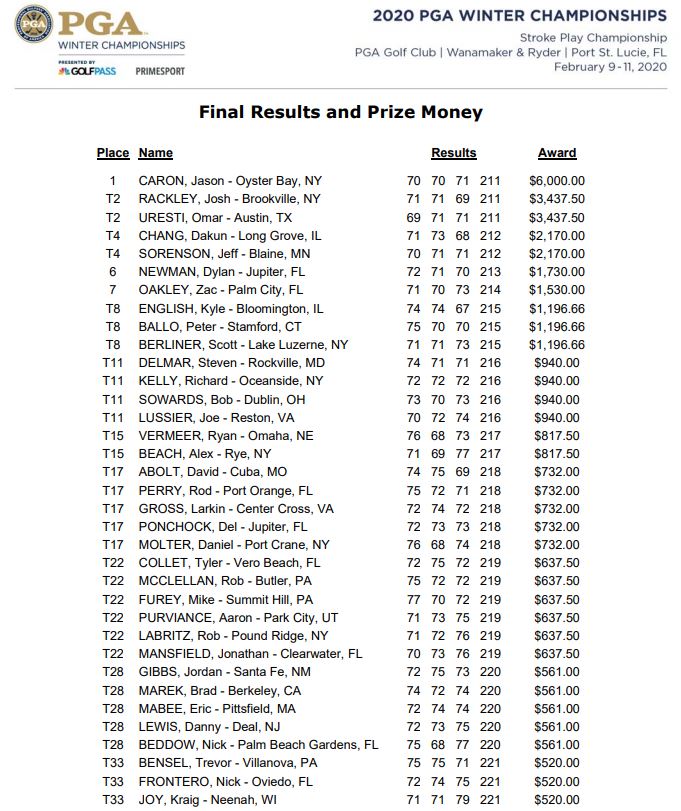 Beach, of Stamford and an assistant pro at Westchester Country Club in Rye, N.Y., struggled to a closing 77 to tie for 15th at 217. The lefthander won the 2019 PGA of America Professional Championship to lead 20 club pros into this year’s PGA Championship on May 16-19 at Bethpage Black in Farmingdale, N.Y. He finished two strokes ahead of Danny Balin, a frequent Connecticut Open challenger from Freshman Country Club in Lake Success, N.Y.