ORLANDO, Florida – An independent study featured in the December issue of GOLF Magazine found that driving distance, ball speed, shot dispersion and smash factor all improved when golfers wore replaceable cleats instead of spikeless footwear. The study was conducted at Pinehurst Golf Resort by GOLF Top 100 instructor Eric Alpenfels, PGA and Dr. Bob Christina, Emeritus Professor of Kinesiology at the University of North Carolina at Greensboro.

The improvement in these categories was most significant in golfers with high handicaps as the cleated footwear helped to create a more solid lower body foundation, more consistent swings and improved energy transfer from the clubhead to the ball.

“This study reinforced what we believed about the benefits of wearing replaceable cleats,” said John Hohman, senior vice president of marketing for PrideSports. “Driving distance and accuracy are key aspects of improving your scores, and the data provided by this study shows that your footwear choice absolutely makes a difference in your swing. Every teacher of the game should review this study and start asking students about their footwear during the very first lesson.”

The study utilized 28 adult male golfers divided into two groups, 14 with handicaps over 12 and 14 with handicaps under nine. Each participant hit 10 measurable drives, five in replaceable cleats and five in spikeless shoes. Each drive was on dry, flat ground and new, Titleist Pro V1x golf balls were used throughout the study. 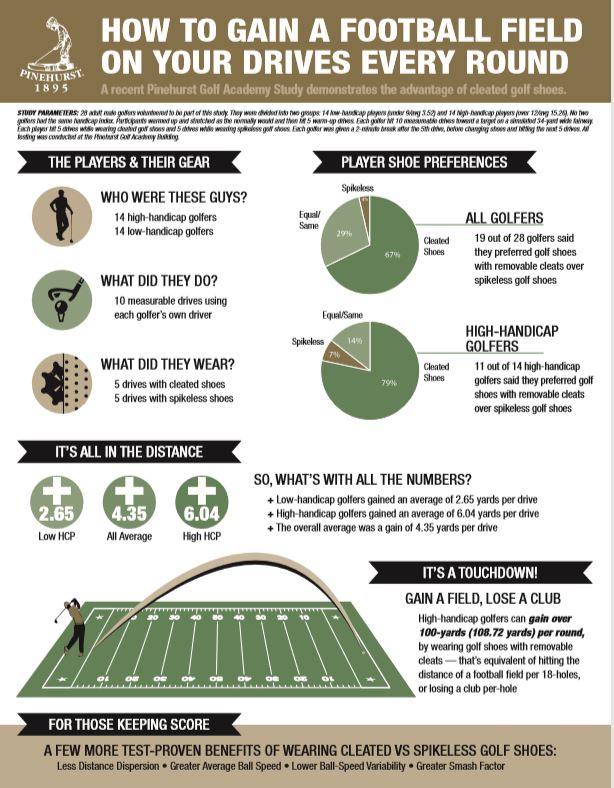 The key findings were as follows:

The golfers’ average carry distance was 4.35 yards longer when wearing.

The golfers’ average ball speed was faster and more consistent with replaceable cleats.

“The spiked shoes provided better grip with the ground and a more solid lower-body foundation, which produced higher-quality driver swings,” said Alpenfels. “The swings in spiked footwear were more efficient at translating clubhead speed into ball speed, because of more centered contact between the clubhead and the ball.”

In addition to producing data, the study also asked the participants for their comments about the two types of shoes after participating in the test. The responses included the below observations regarding the shoes with replaceable cleats.

* “I felt a better grip with the ground during the swing.”

* “I felt like I got more power from the ground up with spiked shoes.”

* “I felt more stable during my swing and had better balance.”