Though not a golfer, Walt Disney was the creator of the world’s leading family entertainment destination. He was a true visionary, and it didn’t take him long to realize that the sky was the limit for golf in Central Florida.

While developing the overall concept for what would become the Walt Disney World Resort, and shortly after acquiring the Florida property, Disney sketched a preliminary outlook for the future of the site — including his vision for EPCOT, an Experimental Prototype Community of Tomorrow. On the drawing — just to the west of the property’s then-proposed central hub, and below spaces devoted to the eventual Magic Kingdom Park, resort hotels, convention facilities, and man-made lakes – Disney identified and labeled a large area designated for “golf“.

In 1971, Disney’s Magic Kingdom® first opened its gates, and ever since then, golf has played an integral role in creating the diverse atmosphere that comprises the Walt Disney World Resort guest experience.

A half century later, four unique courses, now operated by Arnold Palmer Golf Management (APGM), provide a golfer’s paradise. The layouts are challenging enough for the PGA TOUR’s greatest players, but also friendly enough to accommodate all skill levels at what has come to be known as “The Happiest Place on TURF!”

As Walt Disney World Golf ushers in the next 50 years, there’s tremendous excitement in store with the grand re-opening of Disney’s Magnolia Golf Course in 2023 while next December will mark the 50th anniversary of the Jack Nicklaus legacy here – his third consecutive victory in what was then known as the Walt Disney World Golf Classic.

Walt Disney World Resort, meanwhile, will conclude its ongoing 50th anniversary festivities in March of 2023 when “The World’s Most Magical Celebration” draws to a close while, at the same time, the Walt Disney Company will begin to commemorate its centennial, so there is an abundance of reasons to celebrate Disney’s past, present, and future over the next 12 months and beyond!

While each of the championship-caliber courses receives accolades for design and playability, it is the year-round accessibility to all of the world-class amenities, service, and convenience that helps differentiate the Walt Disney World Resort from any other golfing destination.

Given the diversity of the golf challenges and exceptional Walt Disney World Resort dining and entertainment options, it’s no wonder Golf Digest has ranked Walt Disney World Golf among its top five destinations for a family golf trip.

As part of Disney’s overarching mission to create the most magical experience possible, Walt Disney World Golf has overseen an extensive redesign of Disney’s Magnolia Golf Course, which will be fully re-opened to the public in early 2023. These changes involve a significant reimagination of all 18 greens and much of Magnolia’s closing stretch – holes 14 through 17.

While work continues on Disney’s Magnolia Golf Course, visitors at the Walt Disney World Resort have multiple world-class options to consider if they wish to play golf. Disney’s Palm and Lake Buena Vista Golf Courses remain open for play, along with Disney’s Oak Trail Golf Course, a nine-hole walking layout. Additionally, driving ranges are open to the public and there is the added attraction of FootGolf, a hybrid sport between soccer and golf, which has grown in popularity in recent years. 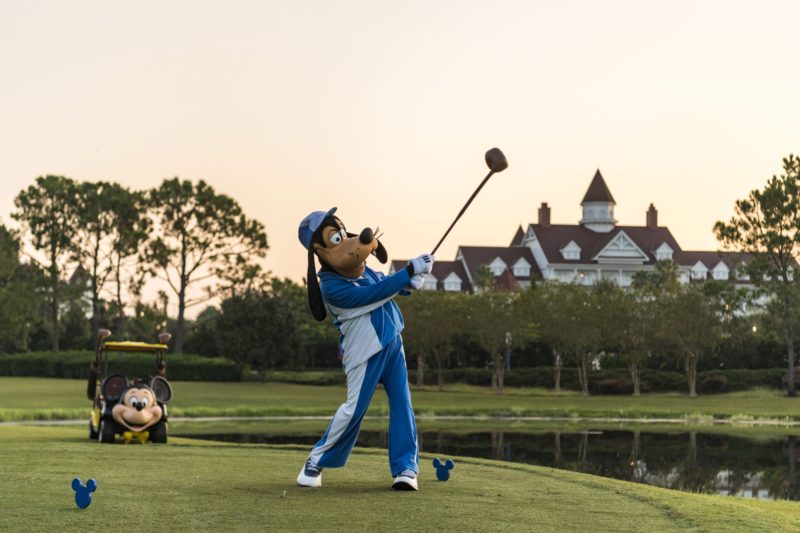 Disney goes out of its way to make vacations as convenient as possible with complimentary transportation to courses from select Walt Disney World Resort hotels and free parking for golfers on their way to courses. The resort experience is literally tailor-made for travelers. Golfers on the go can rent TaylorMade golf equipment and Adidas golf shoes. Junior rental equipment is also available.

Picturesque natural beauty featuring shimmering lakes, majestic palm trees and tropical sands make Disney’s Palm Golf Course a pleasure to play and a challenge to conquer. Tee options vary between 5,213 yards (red tees) and 6,870 yards (blue tees). The par-4 18th hole – which features a well-protected, elevated green – was always one of the most difficult on the PGA TOUR.

Designed as a classic Tour style layout by Joe Lee, Disney’s Magnolia Golf Course is the longest of the Walt Disney World Resort courses, playing at 7,560 yards from the Classic tees during tournaments, 7,141 yards from green tees and 6,684 from the white tees for daily play. The course, which features magnolia trees along the fairways and elevated tees, is undergoing its most extensive redesign ever prior to reopening to the public in 2023. Holes 14 through 17 are being reconfigured and all 18 greens are being substantially enhanced.

Designed in 1972 by Joe Lee, this course near Disney Springs winds through several of the resort properties, including Disney’s Saratoga Springs Resort & Spa and Disney’s Old Key West Resort. The course, which plays between 5,177 and 6,745 yards, includes a par-3 seventh hole with an island green and a Mickey Mouse-inspired bunker that was added to the rear of the ninth green in 2018. 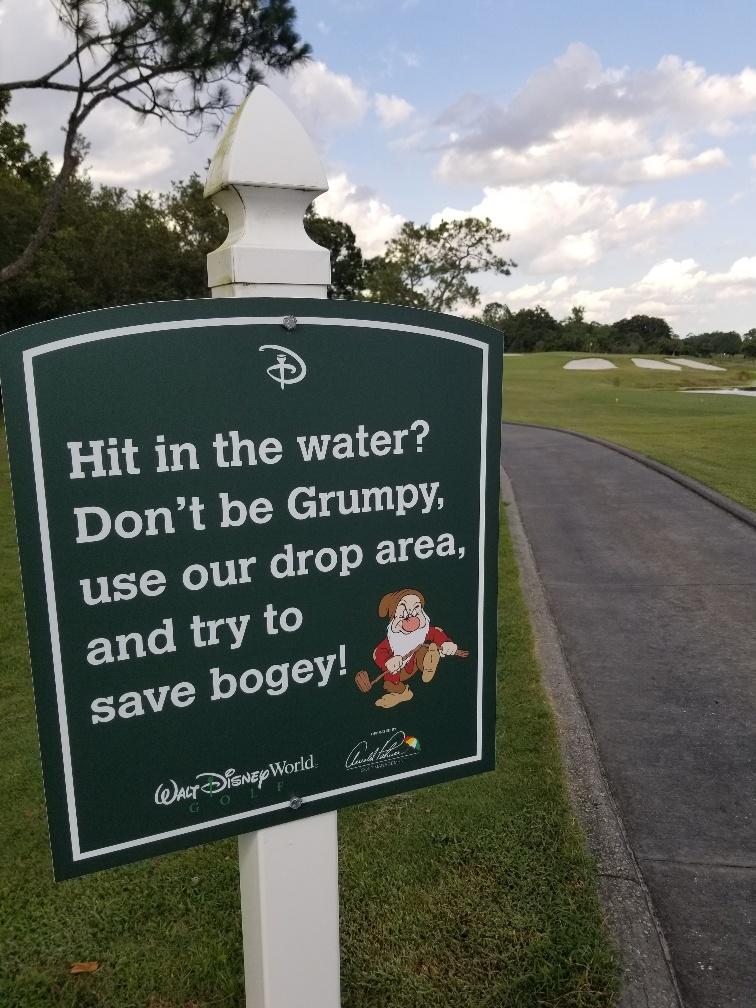 A nine-hole walking course, Disney’s Oak Trail Golf Course is well-suited for families and casual golfers. This course, originally only six holes and known as “The Wee Course“, was expanded in the 1990s by Ron Garl who designed the fifth, sixth and seventh holes to feature water hazards around a canal and pond. The par-36 layout can be played from junior tees (1,713 yards) or close to 3,000 yards (including a 517-yard par-5) from the white tees.

The Walt Disney World Resort and Arnold Palmer Golf Management, which launched a 20-year strategic alliance more than a decade ago, are not resting on their laurels. Golf Inc. Magazine recognized the redesign of Disney’s Palm Golf Course in its 2015 “Renovation of the Year” awards and millions of dollars in course upgrades have already been made by APGM – with more to come – and these extend well beyond the fairways and greens.

A new fleet of premium Yamaha golf carts was recently introduced at Disney’s Palm, Magnolia and Lake Buena Vista Golf Courses. Each cart is equipped with a cutting-edge touchscreen Yamatrack GPS system to provide overviews of every hole, along with yardage from the cart to the flagstick. These carts boast plush, cushioned seats and a suspension system to provide a comfortable ride, USB ports to power mobile devices and Bluetooth speakers for the musically inclined to enjoy. Families can play and ride together as they interact with Donald Duck, Daisy Duck and Pluto in Disney character-themed four-seater golf carts. 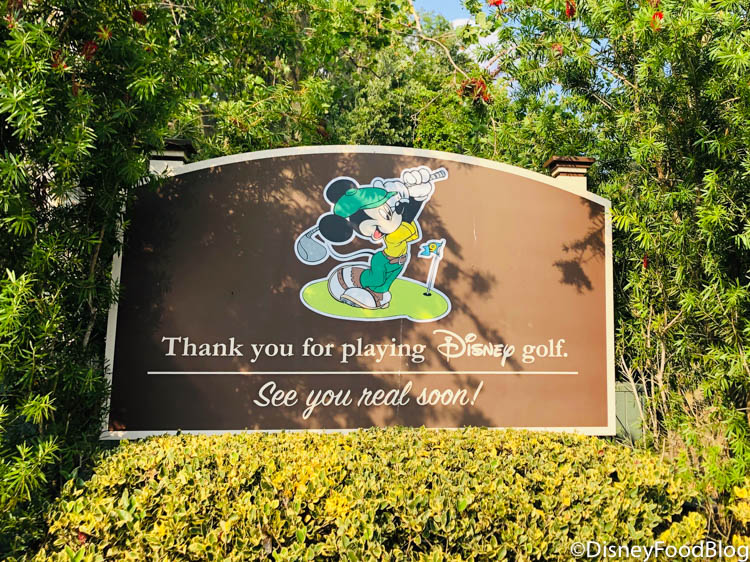 More state-of-the-art technology is available in the form of Robo-Caddies – a small, robotic golf cart that employs GPS and Bluetooth technology to transport your clubs and all of your additional gear safely around Disney’s Oak Trail Golf Course. Golfers clip the cart’s small transmitter to their belt, load their golf bag, and focus on their next shot as the autonomous cart follows a few paces behind at a walking speed.