BOSTON, Mass – An analysis published in Golf Business News of the content of media coverage given to some of the world’s most popular sports has revealed that golf receives the highest percentage of positive reporting.

The study, which was carried out over a nine-year period from 2013 to the current day, focused on coverage given on Sky Sports’ website to a variety of sports, including football, rugby, cricket, tennis, F1, boxing and American Football.

That compares with just 65% of what was regarded as positive coverage for cricket, 63% for tennis and 54% for boxing. Football, which had over 17,500 articles, was 71% positive. 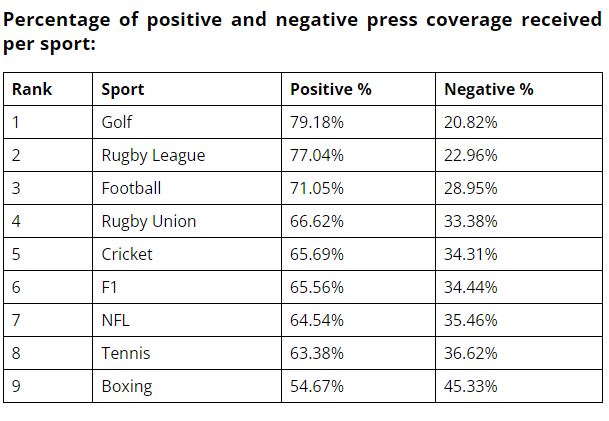 Despite the current on-going feud regarding breakaway golf leagues and the funding of new international tournaments, professional golf has been large free from any huge scandals or huge controversies over the last decade.

“The large amount of positive press coverage surrounding golf radiates positivity out into the wider culture and atmosphere around the sport,” said Jamie Boler of GolfSupport.com.

“This has been seen by the great camaraderie and support shown between players, for example after Tiger Woods was seriously injured in his car crash in 2021 other golfers wore his signature red and black in support and tribute to him. This positivity makes the game a great sport to play and watch and we ultimately believe that it lifts how fans feel.”

Golf participation increased during the pandemic in 2020 and 2021. And, not since the ‘Tiger ‘Boom‘ has golf seen such significant growth, participation and popularity.

“One of the main attributes golf brings into media attention is the focus on prestige and presentability, and this is encapsulated in the coverage and display shown across the flagship competitions, added Christian Ward-Pszyk, a leading sport and exercise psychologist.

“The image is drawn towards the exquisite presentation of the courses and the emotional camaraderie of fans and players alike, illustrating a clean, welcoming perspective that draws positive media coverage. Within its key components, golf highlights the benefits of biophilia and low-impact exercise, while also generally providing low levels of direct competition as scoring is predominantly focused on a comparison with par, rather than one another and the direct competition, challenge and controversy that those aspects can bring.”

(Content from Golf Business News was used in this report.)