BOSTON, Mass – With golf back open for play in all 50 states in May, 88% of surveyed courses indicated that their rounds-played for the month was the same or higher than normal for this time of year, backing up anecdotal reports that engagement has been strong as golf restrictions ease amid the coronavirus pandemic.

Only 12% of facility operators report rounds were below normal, which also is understandable given operational limitations in certain areas, be it a lack of carts due to one-rider rules or tee time intervals that are more spread out than usual.

Among core golfers (those who have played at least eight rounds in the past 12 months), 96% say they planned to play as much or more often than normal, according to the National Golf Foundation, the world’s largest research team dedicated to golf, providing information with accurate and objective insights 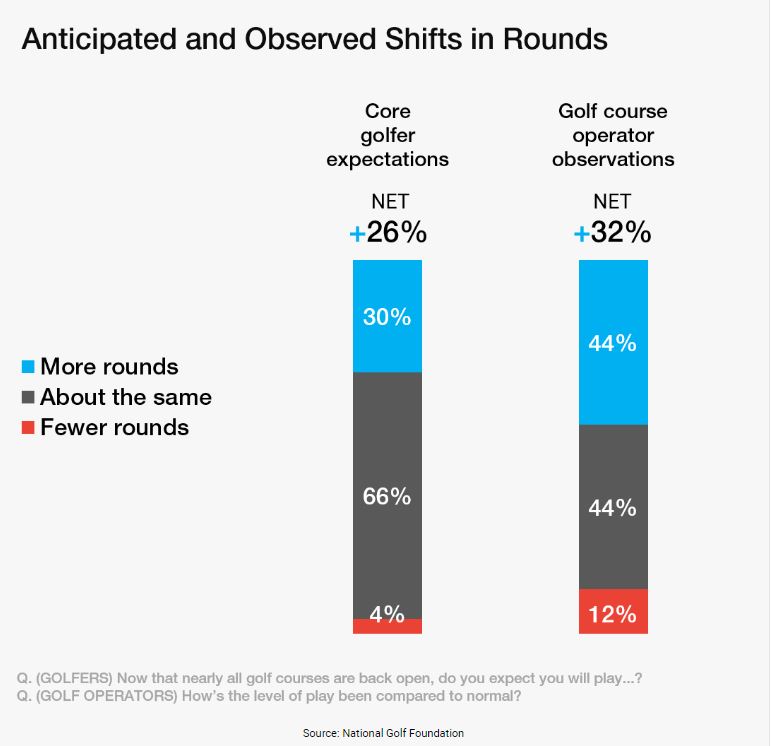 While on a net basis approximately one quarter of golfers say they’ll play more and one-third of operators are observing more rounds, this doesn’t necessarily mean the number of rounds played for the month will see a rise of a similar percentage. Rounds-played data for May will be available at the end of June.

In April, rounds-played were down 42% nationally as more than half of U.S. courses were shut down due to governmental restrictions.

In addition to feedback from golfers and course operators, trends in online searches also point to golf’s surge in popularity and activity during the month of May.