HOWEY-IN-THE-HILLS, Florida – You could sense excitement mixed with uneasiness as 64 female golfers teed off on the magnificently-groomed El Campeon Course in the final round of the Inova Mission Inn Resort & Club Championship. The outcome of this Epson Tour event is a life-changing moment for the winner on the journey toward earning the “Golden Ring” that opens the door to a professional golf career on the LPGA Tour.

After 36 holes, the leaderboard showed a few young ladies who know what it takes to win a qualifying tournament on the Epson Tour. But most of the field faced “baptism under fire” fighting off pre-round jitters as they step up to the first tee, before drilling that first drive down the middle (hopefully) of the fairway.

The leaderboard was bunched with 12 players within 5 shots of leader Gina Kim, 22, of Durham, North Carolina. With rain, wind, and lightning storms interrupting the first round, and typically hot and sticky Florida weather greeted players during round two. The top players know it will take a low score to earn the title “El Conquistador of El Campeon.”

In a sparkling Memorial Day weekend performance, Gina Kim stepped up with an impressive final round 4-under par 69 after 36 holes, then delivered an even par 73 to total 11-under par, to edge Caroline Inglis and Maria Fassi, who finished T-2 at 9-under.

The Duke University alumna recorded six birdies to earn her first career victory. Kim’s resume also shows a win at 2021 Pinehurst North & South Women’s Amateur. With the win, Kim earns $30,000 totaling $38,526 in her Epson Tour career. She is projected to jump 46 spots from No. 52 to No. 6 in the 2022 Ascensus Race for the Card.

“It definitely means the world to me,” said Kim, who had her mother [Sangsuk] on the bag. “Not just because it’s unexpected, but it’s a testament to how much work I’ve put in and progress I have made as a rookie.”

Kim finds the winner’s circle in just her fifth Epson Tour start. She discussed how lessons learned early in her pro career made all the difference.

“I was so impatient the first four months [after I turned pro], trying to make something crazy happen. I realized that you have to celebrate the small wins too. That’s why yesterday I was happy with what I had accomplished to that point,” said Kim. “This is the cherry on top.

“The whole round I told myself how proud I was of what I accomplished already. I achieved everything I wanted to [this week] in the first two rounds and proved to myself that I have the game and talent to be in contention. It was a perfect finish. I couldn’t be happier.”

Kim will celebrate by traveling to Pine Needles Lodge & Golf Club in Southern Pines, N.C., where she is an on-site alternate for the U.S. Women’s Open scheduled June 2-5. 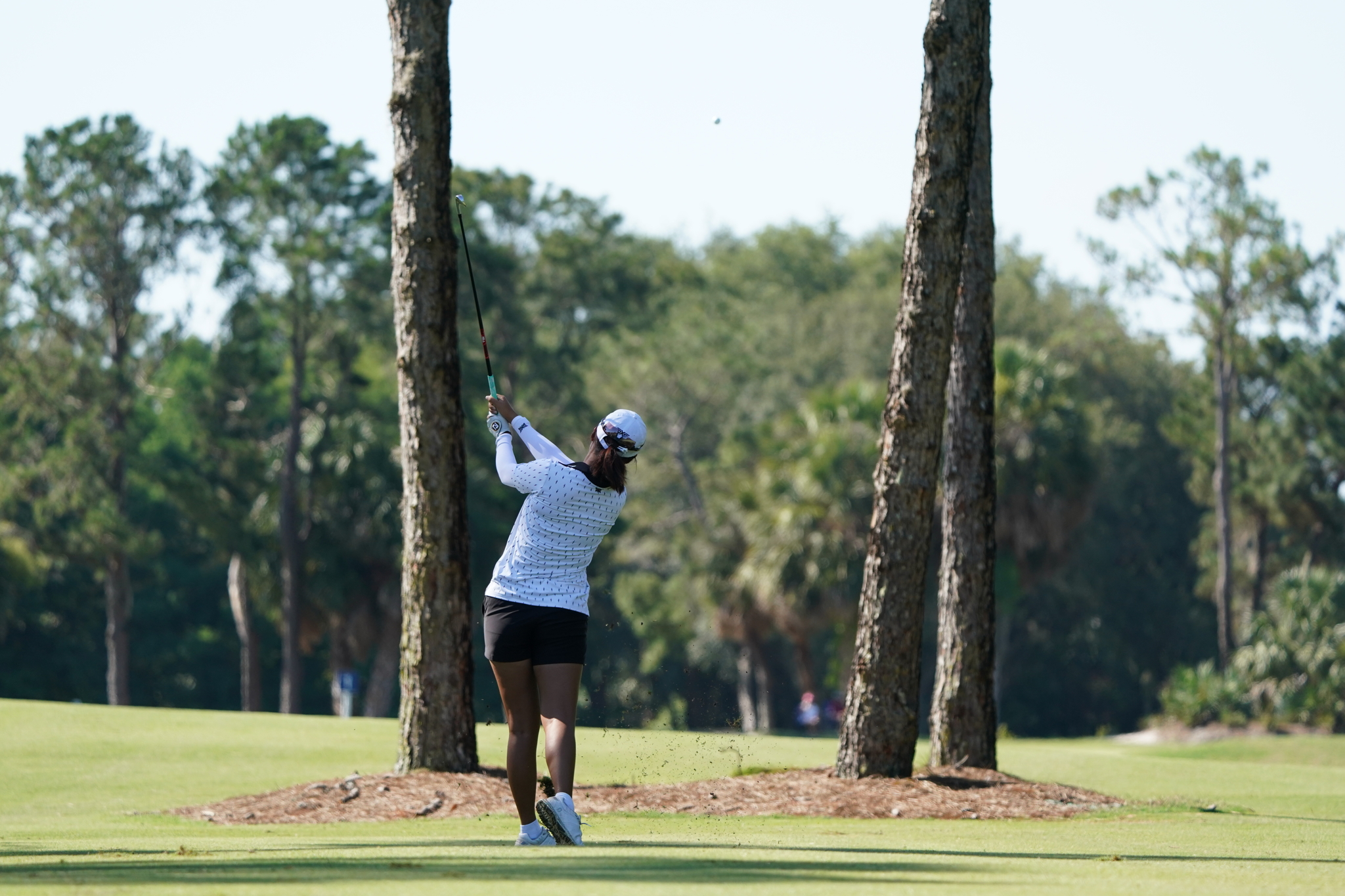 ASCENSUS RACE FOR THE CARD

A total of 64 competitors made the cut of 2-over par. Six of the top seven ranked players made the cut to earn a paycheck for their efforts and valuable points in the Acensus Race for the Card.

Dani Holmquist, Amy Lee finished at 8-under for T-4, while Gigi Stoli was 7-under and finishing T-7 at 5-under was Yu-Sang Hou and Robyn Choi. 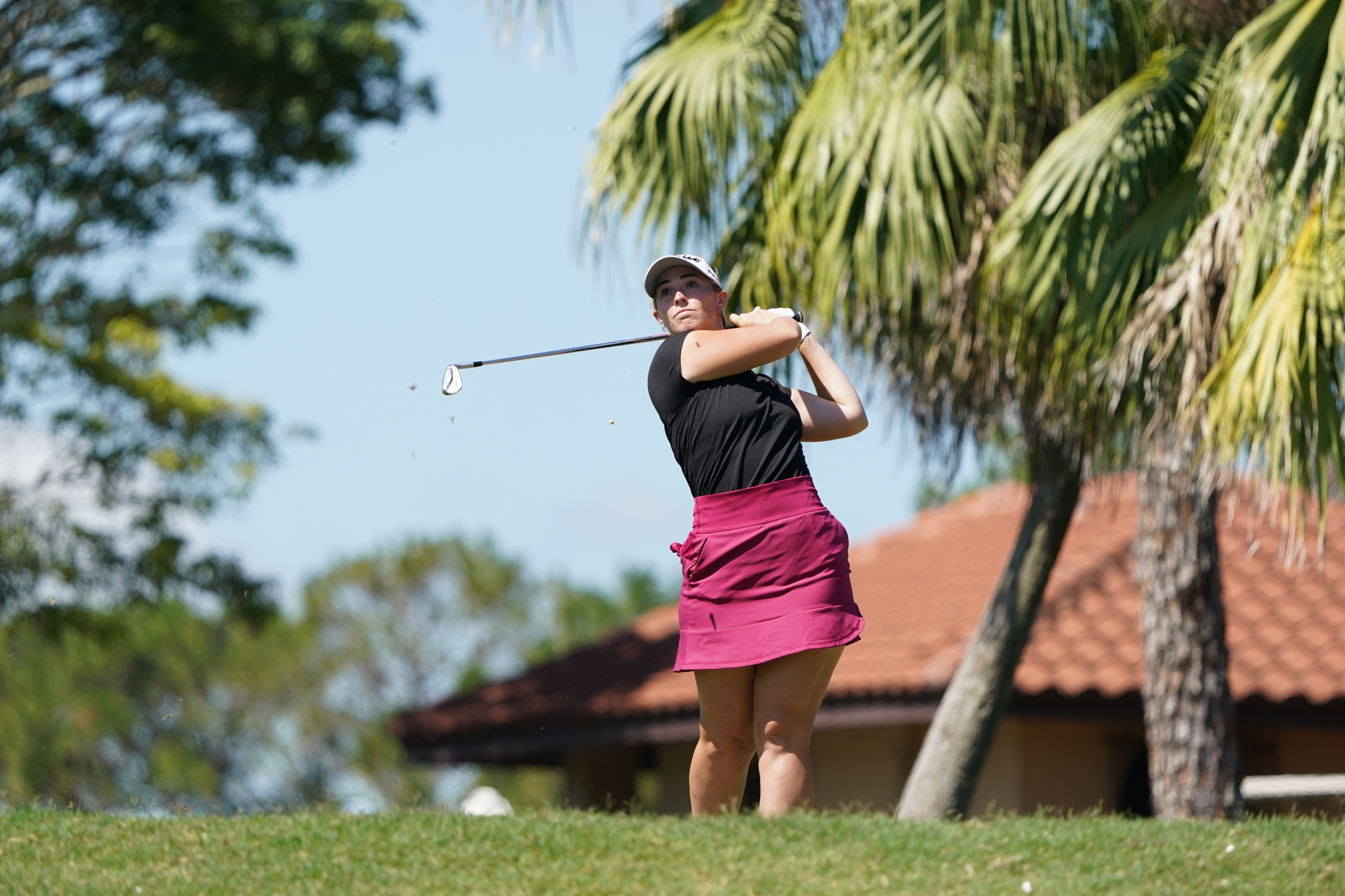 After 13 holes the leaders rotated positions. Gina Kim at 10-under was first while while Amy Lee and Maria Fassi were tied at 9-under. The back nine has a Par 5, 17th hole with a green guarded by water in the front and the Par 4, 18th hole has water running half way down the right side of the fairway starting directly in front of the tee box.

The 17th hole, Par 5 was not one you would expect much movement to take place, but that was not the way it played out. Maria Fassi found herself in trouble after her 2nd shot. After much discussion with the Rules Official, she was left with a 190 yard shot off a difficult lie. Her third shot found the bunker above the green and resulted in a bogey. Amy Lee also had trouble when she three-putted after reaching the green in three. Gina Kim parred the hole to remain at 10-under.

Maria Fassi made par on No. 18 and finished 9-under. Caroline Inglis also finished 9-under, playing in the group ahead. Amy Lee finished up with another bogey on No. 18 for 8-under. Gina Kim finished with a birdie and 11-under total. That was what she needed to be crowned winner of the 2022 Mission Inn Resort Inova EPSON Tour Championship.