HOWEY-IN-THE-HILLS, Florida -The hills are alive this Memorial Day weekend as the Epson Tour hit the ground running with a full field of Professional and Amateur golfers all following their aspirations to Qualify for the LPGA Tour. Amateurs are allowed to compete on the Epson Tour, with the option to turn pro after their collegiate seasons ends. Tee times for the first round on Friday May 27 were split between the front and back nines and were all threesomes.

The Inova Mission Inn Resort & Club Championship is the eighth tournament of the 2022 Epson Tour season. A full 144-player field will be competing for a $200,000 purse with the winner’s share of $30,000 in a 54-hole, stroke-play format with a cut to the top-60 players plus ties after 36 holes. This event is the third of four Epson Tour tournaments in Florida during the 2022 season. The others include: Florida’s Natural Charity Classic, Winter Haven; IOA Golf Classic pres. by LPT Realty; Epson Tour Championship, Daytona Beach.

The El Campeón Course at Mission Inn Resort, located about 30 minutes from Orlando, features elevation changes of more than 85 feet. The Course architect is George O’Neil (1917). Yardages for tournament play could range between 6,522 and 6,735 yards depending on options for Nos. 1, 8, 12, 15 and 17. This is the third year of the Inova Mission Inn Resort & Club Championship. The winning score in 2020 was 12-under par, while -8 was good enough for victory last year.

The morning tee times went off without a hitch as seventy-six aspiring golfers were met with calm winds and a golf course ready to extract their very best on all 18 holes. Among this group of players were last weeks IOS Golf Classic winner Grace Kim [8] (Sydney, Australia), Kum-Kang Park [1] (Seoul, Republic of Korea), Sophie Hausmann [5] (Nottuln, Germany). After completion of the first half of the first round Gina Kim (Durham, NC) was the leader on the scoreboard at -7. Jing Yan (Shanghai, China) was in second place at -3 when first-round action was suspended at 2:01 pm due to dangerous weather in the area.

At 3:12pm play resumed in the first round.

The weather is playing a major role in disrupting the tournament for the second time. At 5:26 pm, first round action was again suspended due to torrential rain and sporadic lighting.

First round action resumed at 6:25 pm. It looks like this could be a race to the finish between the first round and the impending darkness. At 7:07 pm there were players just making the turn to their back nines.

Gina Kim (Durham, NC) is still holding on to first place at -7 but there has been consistent movement on the rest of the leaderboard. Sarah Elizabeth White (Grand Rapids, MI) is in second at -5. Gigi Stoll (Beaverton, OR), and Maria Fassi (Pachuca, Mexico) are in the third spot on the board at -4. There are currently six players tied in the fifth spot at -3.

It has been interesting to see how soft the El Campeon Championship Course has become over the past couple of hours. The mid-morning to early afternoon players were faced with lightning fast greens and fairways that seemed to encourage the ball to just keep on rolling. The early rain coupled with the second wave of rain towards the early evening have certainly changed the golf course from morning to afternoon. Greens seem to be holding approach shots much better but the driving distance seem to have shortened after each rainy period. 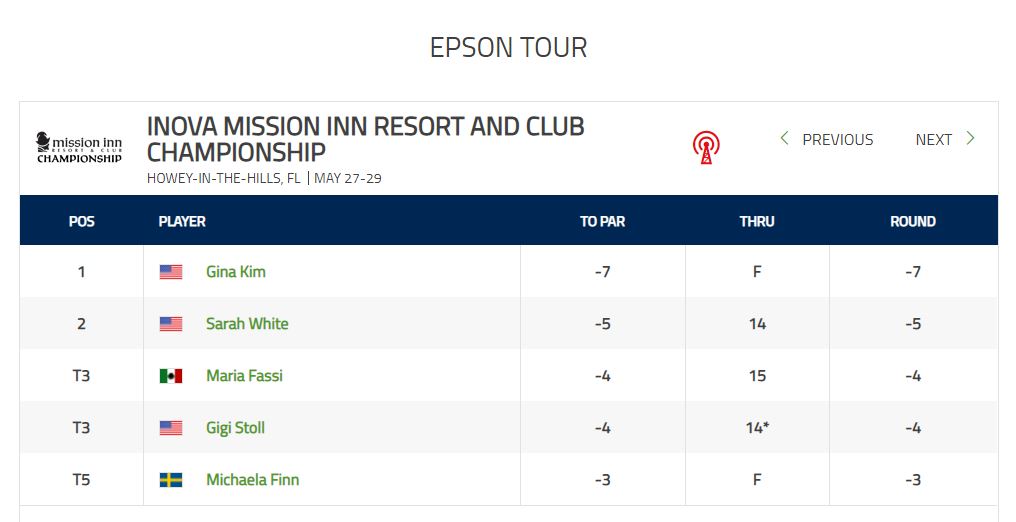