HARTFORD, Conn. – Frank Bensel has won at many different levels for decades.

The three-time Connecticut Open champion added to his national accolades Thursday when he and Anthony Aruta rallied for a two-stroke victory in the PGA of America Senior-Junior Team Championship at the PGA Golf Club’s Wanamaker Course in Port St. Lucie, Fla.

After a bogey at the 12th hole dropped Bensel and Aruta four shots back, Bensel thought he and his partner had “to run the table” if they were to pull out a win. They almost did, making birdies on the next five holes before closing with a par for a third consecutive 10-under-par 62 and 72-hole total of 35-under 253 that was worth $10,000.

“Today was the Frank Bensel Show,” said Aruta, the head pro at North Shore Country Club on Long Island. “He was a machine.”

Bensel hit a 5-iron to 20 feet at the 17th hole and made the birdie putt to give him and Aruta their first outright lead of the tournament. Bensel opened the round with an eagle and then added five birdies.

“We knew we had to shoot 10- and 11-under and hope the guys in front of us didn’t do that,” said Bensel, who teaches at Century Country Club in Rye, N.Y., and The Breakers in Palm Beach, Fla.

As Bensel was birdying No. 17, Georgians Tim Weinhart and Luke James, who began the day with a four-stroke lead, bogeyed the par-5 16th hole when Weinhart’s birdie putt lipped out and he then missed a 5-foot par putt to drop to 33-under. 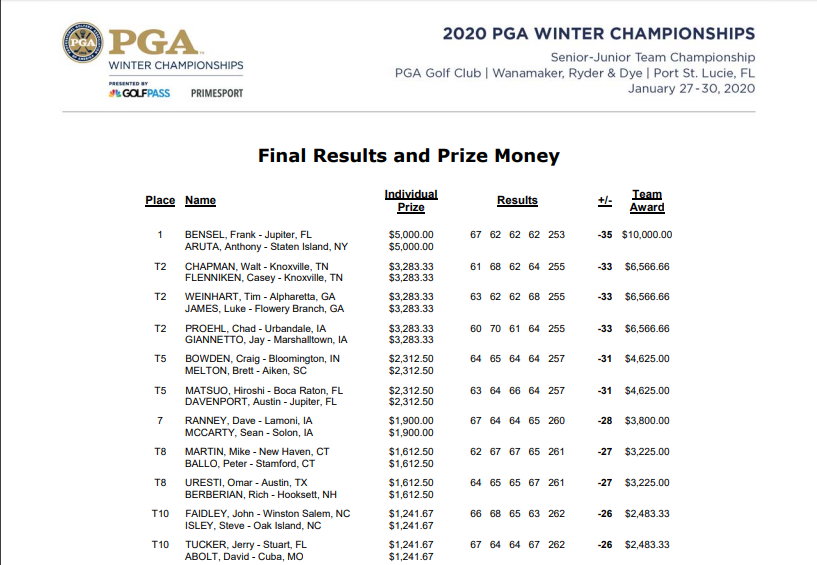 Weinhart and James played the first 63 holes in 33-under, the last nine in even-par to close with 64 for 255. Weinhart taught James since he was 15, and they admitted they were pressing on the final nine.

“There’s a fine line between trusting and trying,” Weinhart said.

Weinhart and James tied for second with Walt Chapman and Casey Flenniken of Knoxville, Tenn. (64) and Chad Proehl of Urbandale, Iowa, and Jay Giannetto of Marshaltown, Iowa. They each won $3,283.33.

Mike Martin of New Haven and Peter Ballo of Stamford shot 65 to tie for eighth at 261 with Rich Berberian of Hooksett, N.H., and former PGA Tour player Omar Uresti of Austin, Texas. They each won $1,612.50.