HARTFORD, Conn. – When Harris English made the Travelers Championship his second victory of the PGA Tour season after a seven-year drought, he had one major goal for the remainder of 2021: Make the United States Ryder Cup Team for the first time.

“The Ryder Cup is where I want to play,” English said after he beat Kramer Hickok in a tournament-record eight-hole playoff at TPC River Highlands in Cromwell. “I love (captain) Steve Stricker. That’s what I miss about playing golf at the University of Georgia. I miss that team atmosphere, and the pinnacle of our sport is to represent your country and to play in probably one of the biggest tournaments in the world.

“I still need to keep playing well and keep showing Strick that I deserve to be on the team, but looking forward to having a chance, and we’ll see what happens.”

Though English didn’t finish among the six automatic qualifiers for the team, he did move from 12th in the Ryder Cup points standings after the Travelers Championship to 10th following a tie for 18th in the Tour Championship last week, when he closed with a 2-under-par 68 for a 72-hole total of 6-under 278 at East Lake Golf Course in Atlanta. That solidified Harris being one of Stricker’s six picks who will face Europe on Sept. 24-26 at Whistling Straits (Straits Course) in Kohler, Wisc.

“I’m excited to make this team,” the 32-year-old English said during a Zoom teleconference call. “It’s been a goal of mine since I first turned pro, and to be able to play for Captain Stricker is going to be an unbelievable experience. This is my 10th year on the PGA Tour, and I’ve been around this game a lot and dealt with some adversity that everybody is going to deal with in this game, and I think that’s big for match play. 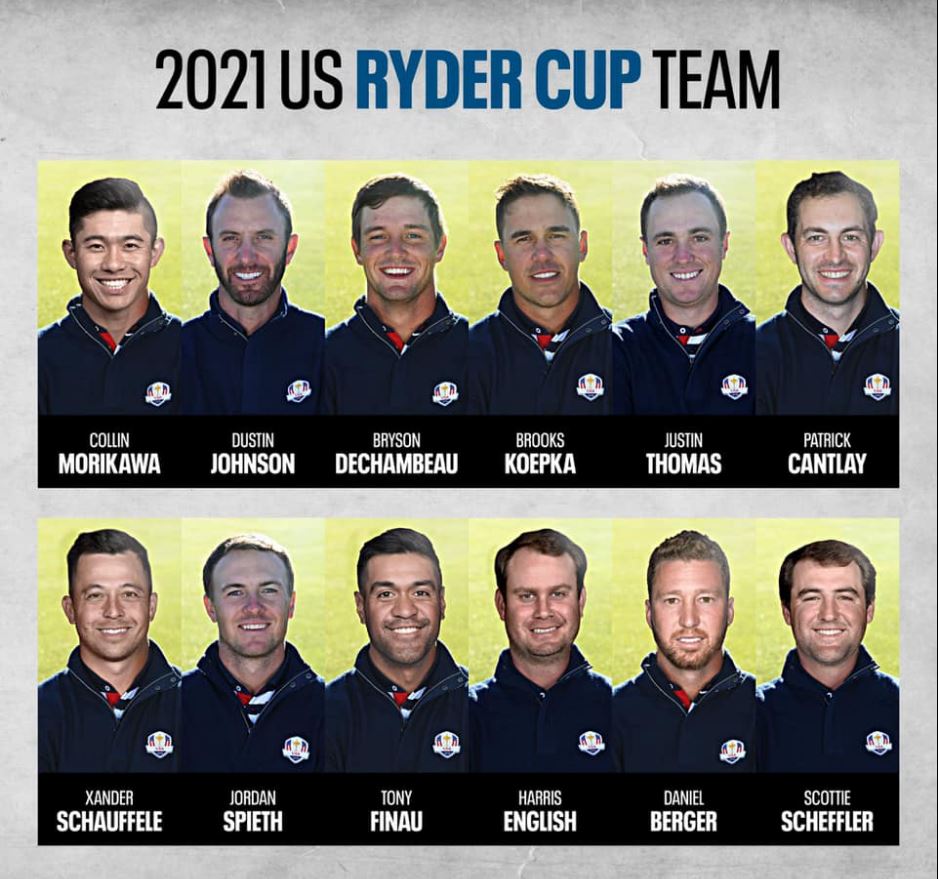 Stricker said, “It’s really been a breakout year for Harris. He brings a lot of energy, a lot of power. Great putter. As we saw, some great putting throughout the year from him this year, and he’s a rookie but he’s been around a long time. He’s 11th in the world (rankings), and while he’s a rookie, he’s also the second oldest guy on the team (to 2020 Travelers Championship winner Dustin Johnson, 37), so he’s been around the block a few times. We’re truly excited to have him, another great guy in the team room, and we’re looking forward to have him be a part of this team for sure.”

Those who had qualified before the Tour Championship, in order, were Collin Morikawa, Johnson, Bryson DeChambeau, Brooks Koepka, Justin Thomas and Patrick Cantlay, who won the BMW Championship and Tour Championship the past two weeks to capture his first FedExCup title, worth $15 million and earning him the nickname “Patty Ice.” Cantlay, whose four wins this season are twice as many as any other player, still holds the PGA Tour amateur record for 18 holes, a then-course record, 10-under 60 in the second round of the 2011 Travelers Championship while playing on a sponsors’ exemption.

The U.S. team has six rookies – English, Berger, Schauffele, Scheffler, Morikawa and Cantlay – for the first time since 2008, when Stricker was a first-timer on the winning side. Scheffler is the first American to be picked for his first Ryder Cup without having won on the PGA Tour since Rickie Fowler in 2010 in Wales. But he has been a steady presence, was runner-up in the World Golf Championship-Dell Match Play Championship in March and is 21st in the world rankings.

The most notable omission from the team was Patrick Reed, who was 11th in the final standings and has a history of thriving in team events with his personality and short game. He earned the nickname “Captain America” after compiling a 7-3-2 record in the previous three Ryder Cups and going undefeated in singles. But he has had a poor summer and couldn’t play the final two qualifying events while hospitalized with double pneumonia that made him fear for his life. He returned to play the Tour Championship and tied for 17th in the actual score in the 30-man field.

“That was a very, very difficult call,” Stricker said of Reed, who also played on each of the last three Presidents Cup teams. “Kind of lost sleep over that one. He’s a tremendous competitor, he brings a lot to match-play golf. His record at the Ryder Cup is pretty darn good. … He was my first call and knew it was going to be hard. But he took it like a true champion, and I apologized many times to him. Just wanted to make sure he knew it was a very difficult decision.”

Reed could be a replacement for Koepka if he can’t play after he had to withdraw from the Tour Championship during the third round on Saturday due to a wrist injury.

After his Travelers Championship win, English was fourth in the WGC-FedEx St. Jude Invitational on Aug. 8 and then finished 31st and 26th in the first two FedExCup playoff events. His Tour Championship finish was highlighted by a hole-in-one on the 225-yard 15th, the hardest hole on the course, in an opening 66 on Thursday. It’s the only ace on No. 15 in the 15 years that the tournament has been played at East Lake.

“I don’t know how loud I got,” said the normally low-key English, who had a delayed reaction to his hole-in-one because he couldn’t see it go in. “I kind of blacked out for 15 seconds. I know my caddie (Eric Larson, who is working again after 10 years in prison) was pumped. He’s a big wine guy, and I know he’s not going to forget about that one. I’m probably going to have to probably buy him wine. That’s how it’s going to be.”

English can certainly afford several cases of the finest wine after he won $535,000 Sunday to increase his season earnings to $6,273.631, eighth on the PGA Tour money list. But more importantly, he’ll be in Wisconsin in three weeks playing for the red, white and blue.

Stricker will host a practice session with the entire team and their caddies later this week at Whistling Straits, which hosted the PGA Championship in 2004, 2010 and 2015. Several members of both sides have played it before, but there’s still much to learn.

“My message from Day One has been to try to ‘outprepare’ the other team,” Stricker said, “and for me, it’s been that way throughout my career just trying to prepare the best I can when I go into events. So let’s get in as much practice as we can and maybe take a little bit of the stress of Ryder Cup week off our plates by getting our work done earlier and get some rest that week.

“I’m excited to see they’re all coming. We’ll go out, have a good time, get to learn the course a little bit, work on some pairings, and from what I understand, they are all looking forward to it. We’ll rely on them to tell us how comfortable they are in situations. It’s a lot about communication has always been a big part of these teams and hearing from them and then talking to your assistants and making sure everybody’s comfortable, and no curveballs. I don’t want to throw any curveballs at these guys. I want them to know exactly where we’re coming from and what we expect out of them going forward.”

Nine automatic qualifiers for the European team will be determined after the BMW PGA Championship in England on Sunday, and captain Padraig Harrington then will make his three picks. Europe has won nine of the last 10 Ryder Cups dating to 1995, including in 2018 in Paris, France. The event wasn’t played in 2020 due to the COVID-19 pandemic.